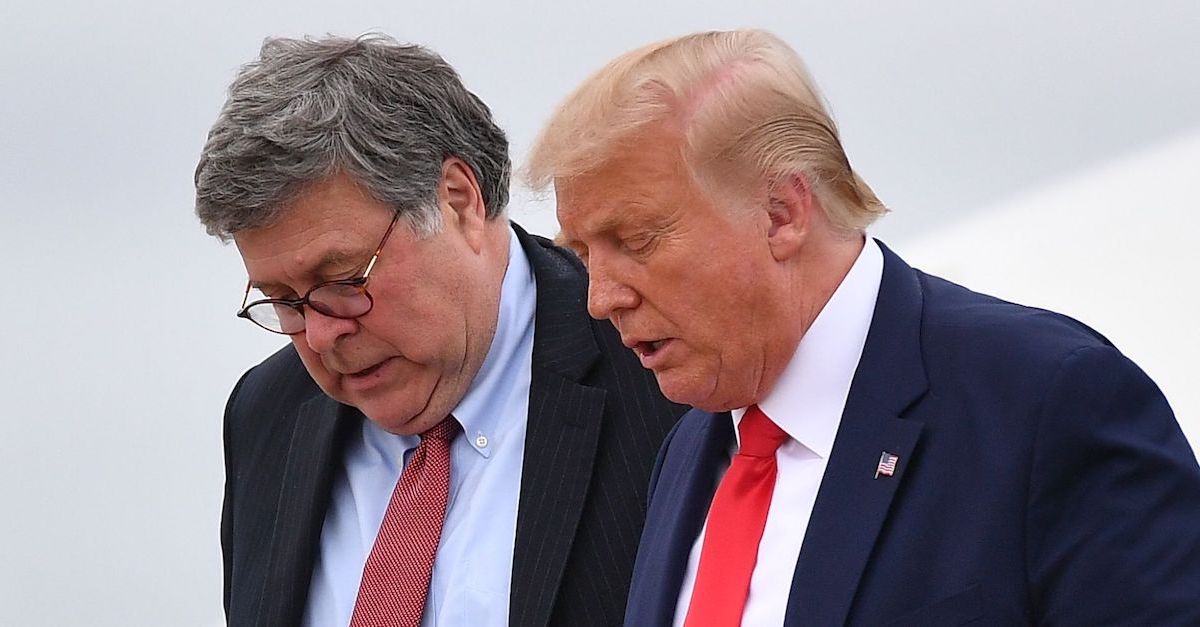 Attorney General Bill Barr has resigned, President Donald Trump tweeted mere minutes after the Electoral College certified that Joe Biden will be sworn in as the 46th President of the United States.

The letter from Barr, filled with praise for the president, began by saying he and Trump discussed the Department of Justice’s “review of voter fraud allegations in the 2020 election and how these allegations will continue to be pursued.”

“Your 2016 victory speech in which you reached out to your opponents and called for working together for the benefit of the American people was immediately met by a partisan onslaught against you in which no tactic, no matter how abusive and deceitful, was out of bounds,” Barr said. ” The nadir of this campaign was the effort to cripple, if not oust, your Administration with frenzied and baseless accusations of collusion with Russia.”

Barr said few could be said to be a strong as Trump in the weathering of such attacks. Barr was, of course, instrumental in such resilience. Barr was invited to meet with DOJ officials the very day he sent an “unsolicited” memo on June 8, 2018 criticizing Mueller’s obstruction probe. By Feb. 2019, Barr had assumed the office of Attorney General of the United States for a second time.

From here, the 77th and 85th Attorney General embarked on a journey that Barr’s harshest critics say showed him to be a “bag man” or a “lap dog” for the president: the rolling out of the Mueller Report; making “lunatic authoritarian” Federalist Society speeches; comparing prosecutors to preschoolers; politicizing the DOJ and offering special treatment to the president’s friends; spawning the John Durham investigation; telling falsehoods about voter fraud and catering to the president’s narrative in that arena; coming to the president’s aid in the E. Jean Carroll case and calling that “routine“; the clearing out of protesters from Lafayette Square before the president’s photo op with a Bible; the DOJ’s quick and quiet reaching of a conclusion about President Trump’s Ukraine call; shake-ups at key U.S. Attorneys’ Offices, including the botched firing of former U.S. Attorney for the Southern District of New York Geoffrey Berman; floating sedition charges for American citizens; anarchist jurisdictions; investigations of Democrats, including Andrew Cuomo, for COVID-19 nursing home deaths; Jeffrey Epstein’s death while in the custody of the Bureau of Prisons; and more.

In more recent days, Barr enraged the president and his supporters by keeping both the appointment of John Durham as special counsel and the investigation of Hunter Biden under wraps until after the 2020 election. The same reaction occurred when Barr said on Dec. 1 that the DOJ has “not seen fraud on a scale that could have affected a different outcome in the election.”

RELATED: Trump Replaces Barr With Anti-Regulatory and Pro-Corporate Crusader Who Has No Experience as a Prosecutor

Jeffrey Rosen will become acting Attorney General when Barr leaves on Dec. 23, meaning that President Trump will have had four acting Attorneys General and two Attorneys General in four years in office. The first acting AG was Sally Yates, whom Trump quickly fired and replaced with acting AG Dana Boente. Jeff Sessions was the next AG. Matthew Whitaker was installed as acting AG after Sessions was shown the door. Then Barr took over.

You can read the Barr resignation letter below: 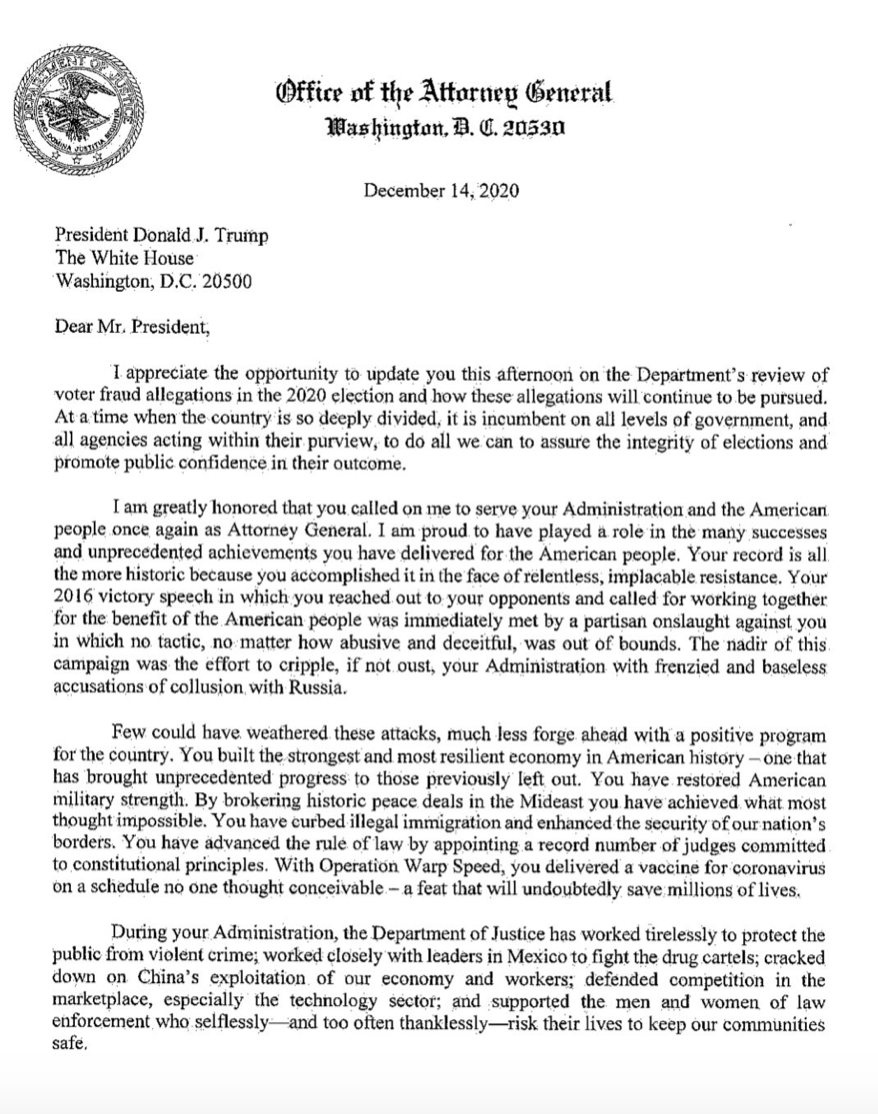 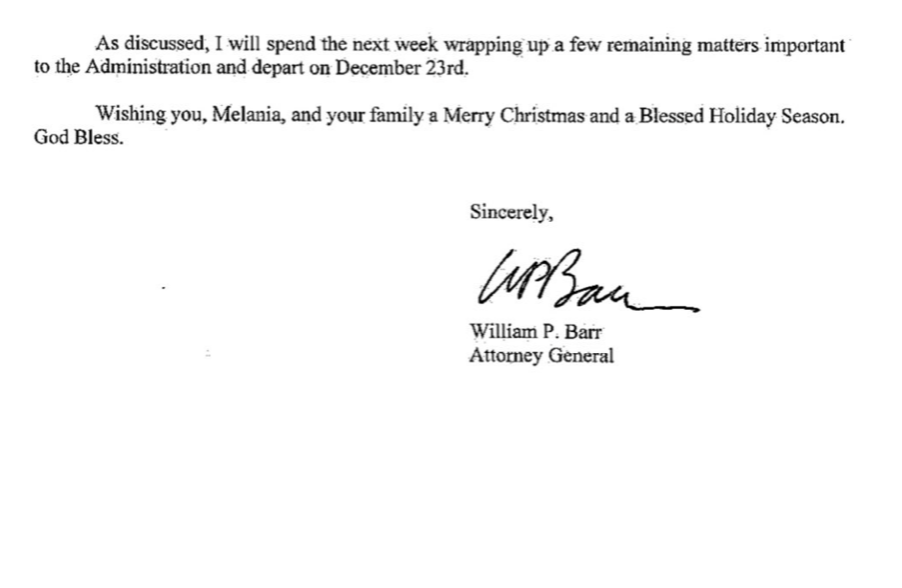