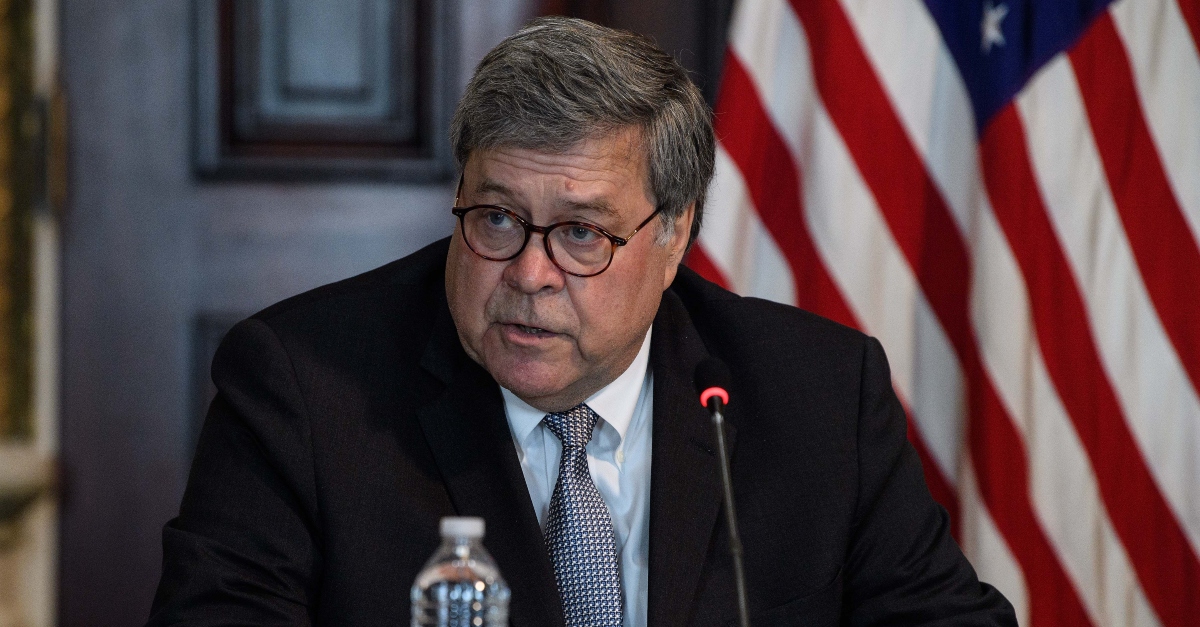 Attorney General Bill Barr tapped U.S. Attorney John Durham more than 18 months ago to investigate the origins of the Russia investigation in 2016 that led to Special Counsel Robert Mueller’s sprawling years-long criminal investigation. Along the way, that investigation turned into a criminal probe and President Donald Trump’s supporters hoped in vain for an Obamagate October Surprise. The actual October Surprise, which was not known until Tuesday, Dec. 1, was that Barr appointed Durham as special counsel on October 19, 2020—just two weeks before the election.

The appointment order specifically kept the Durham appointment under wraps until after the election.

Here’s what Barr authorized Durham to investigate into a Joe Biden administration: 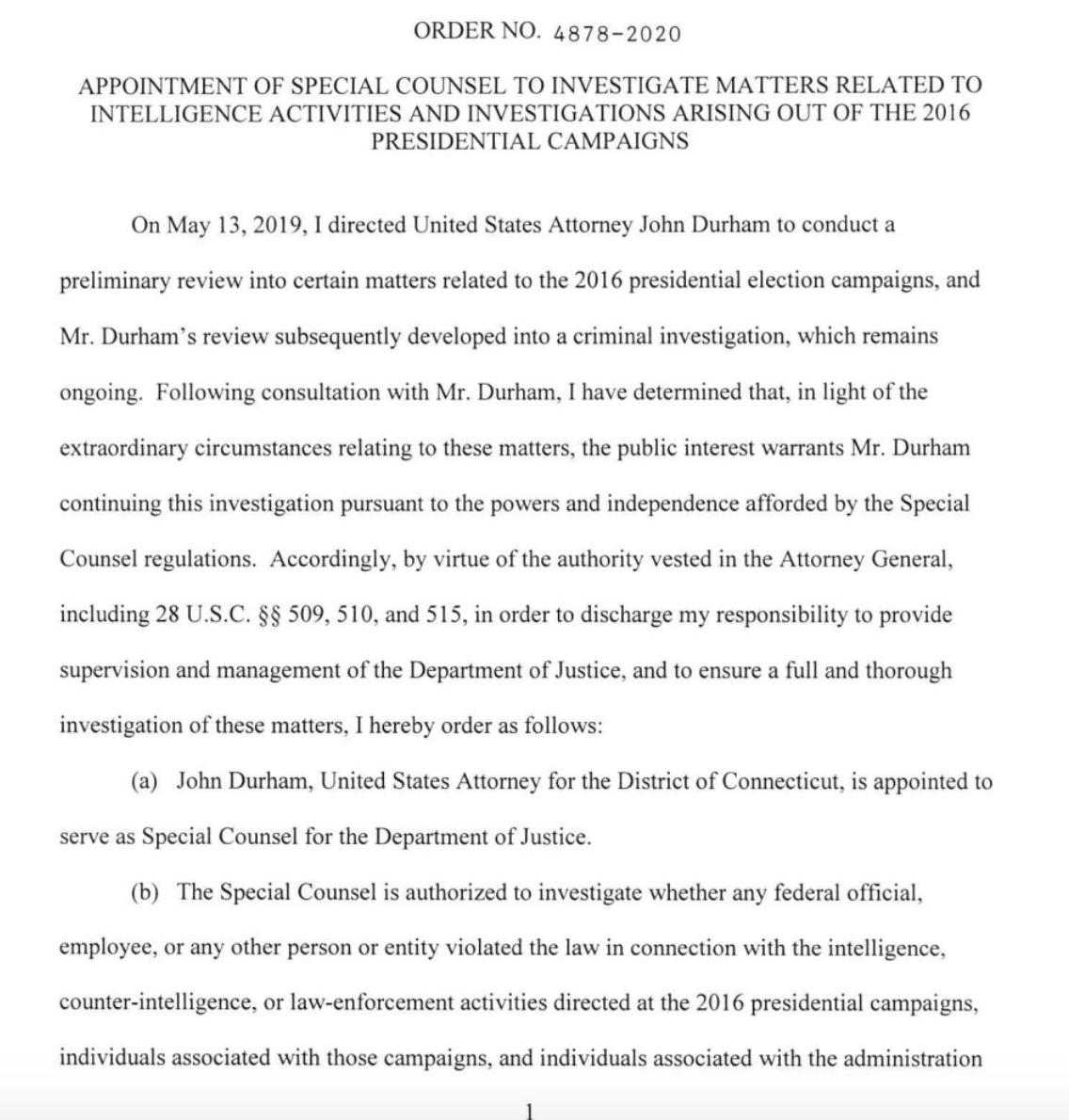 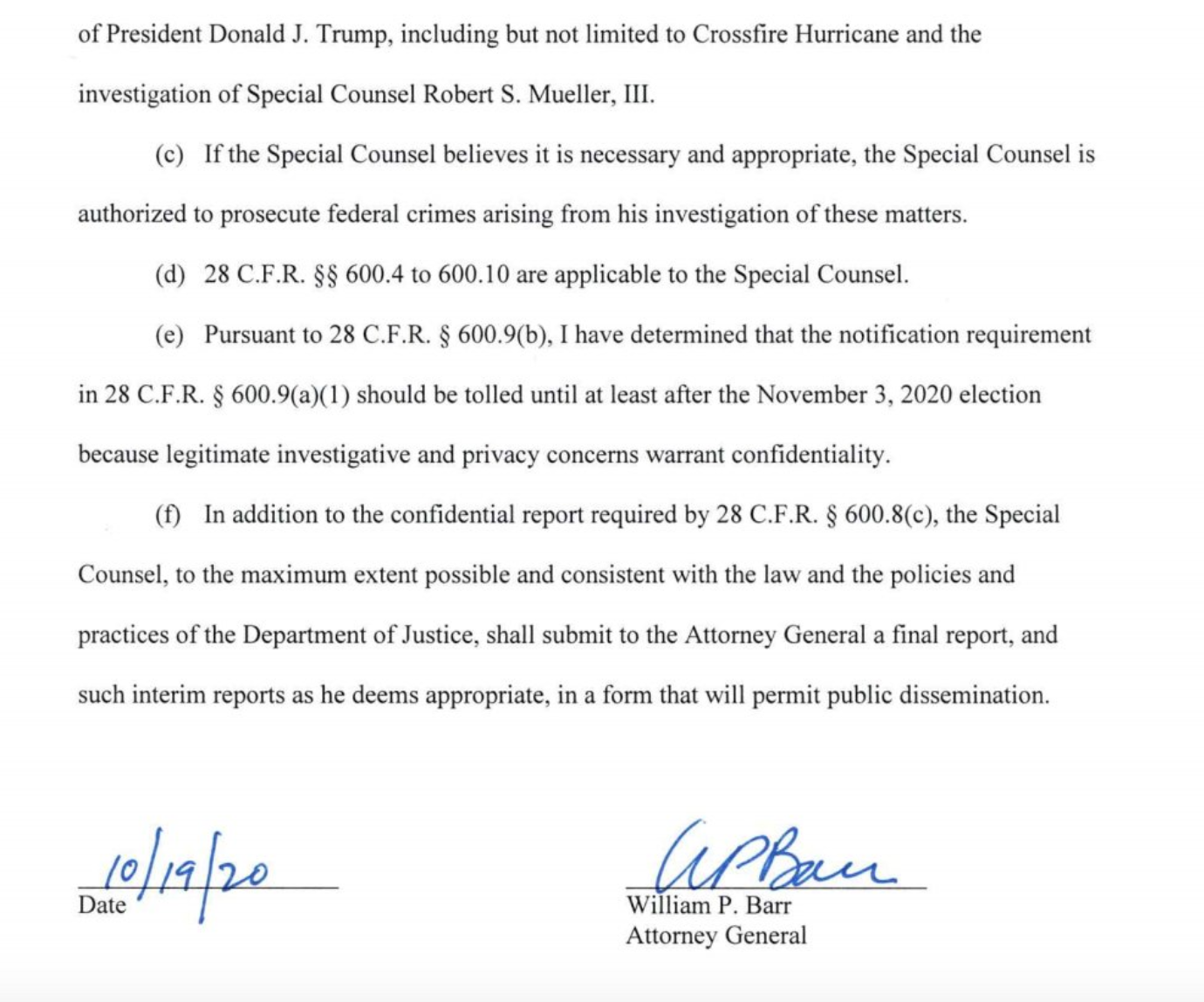 Lawyers interpreted this as serious “trolling” by the 77th and 85th Attorney General of the United States.

And if Biden even thinks about firing Durham, obstruction of justice issues arise. It’s all there in the Mueller report.

Other legal observers saw this as a clear way to make it harder for the incoming Biden administration to fire Durham.

Under DOJ Regs special counsel can be removed only for cause.
“Attorney General may remove a Special Counsel for misconduct, dereliction of duty, incapacity, conflict of interest, or for other good cause” https://t.co/aeVuh24Iyl

It is entirely clear that this is the reason. Here is the interesting thing, though. If Biden requests the resignation of all U.S. attorneys—as he likely will—Durham will have to resign as U.S. attorney in CT and build an office of special counsel just to finish this thing. https://t.co/83GtRQ0F8N

Others wanted to know if Durham has to resign as U.S. Attorney in Connecticut given that the Special Counsel regulations say a “Special Counsel shall be selected from outside the United States Government.”

§ 600.3 Qualifications of the Special Counsel.

"The Special Counsel shall be selected from outside the United States Government." Durham is the US Attorney in Connecticut.

Looks like AG Barr violated his own regulations. https://t.co/JeX2OkHdBI

This is a weird wrinkle if Durham hasn't resigned as US Attorney. I think technically he was acting US attorney in EDVA during CIA investigation, though that wasn't under Special Counsel regs. But unclear how he can agree this takes "first precedence in [his] professional life." https://t.co/kQz1IodjFl

This is an interesting point…

The regulation cited below says a special counsel "shall be selected from outside the United States Government."

(At the time of his appointment, Durham is the sitting US Attorney for Connecticut.) https://t.co/PAYa2d1F6J

Still others said that at least Barr acted better than James Comey by waiting until after the election to announce this.

We can’t really evaluate the propriety of the appointment yet, I think. But in not disclosing it two weeks before the election, it has to be said, Barr acted better than Comey. https://t.co/ayzeb8xtie

President Trump has long called on Barr to punish his political enemies. On Oct. 20, which turns out to have been the day after Barr secretly appointed Durham as special counsel, Trump said the attorney general had to “act fast” by appointing somebody to lead a highly politicized investigation into the Hunter Biden laptop story before the election, invariably to boost the 45th president’s reelection prospects.

“We’ve got to get the attorney general to act. He’s got to act. And he’s got to act fast. He’s got to appoint somebody. This is major corruption and this has to be known about before the election,” Trump said. “And by the way, we’re doing very well. We’re going to win the election. We’re doing very well. If you look at all of what’s happening and all of the people that come in and don’t come in, you take a look all around the country, with Texas early voting, those are our votes too, and we’re doing well in Texas.”

Days before that Fox News interview, Trump said he was “not happy” that Bill Barr didn’t deliver the Durham probe goods in time for the election; a “senior administration official” responded to the president’s comments about Barr by saying the attorney general “saved” Trump’s presidency and “everyone knows it.”

“The great irony in the president’s remarks is he is only in a position to complain because Bill Barr saved his presidency and everyone knows it,” the person told Fox News.

Trump said in August that Barr’s legacy depended on whether he prosecuted his enemies.