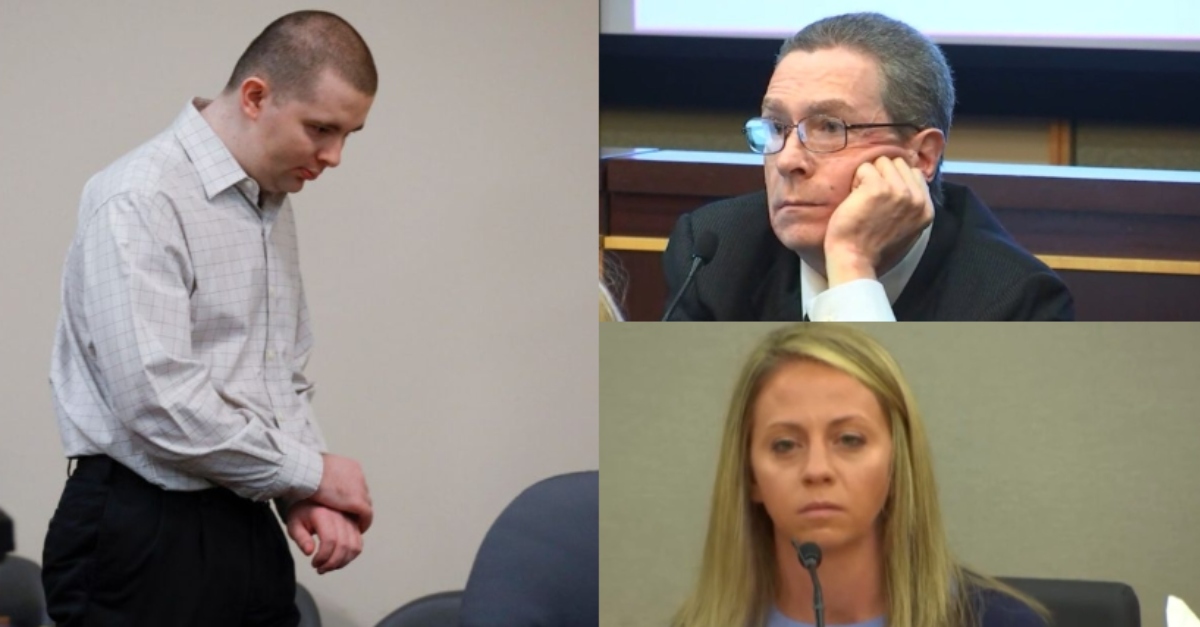 The coronavirus (COVID-19) pandemic has brought court to a screeching halt all across the nation. The bottom line is that this has presented a huge challenge to Law&Crime Network programming. Nonetheless, we’ve developed a pretty healthy library of court videos these past several years. Our producers dug through the archives and picked out our top 10 most memorable trials. So if you’re looking for something to watch while staying inside, here you go. Trials are presented in no particular order.

In the mean time, wash your hands, and stay well.

The 2017 murder of nanny Jennifer Fulford was horrifying. Scott Nelson, a complete stranger, burglarized her employer’s home, kidnapped her, killed her, and dumped her body in a wooded area, prosecutors said.

Most defendants deny guilt, and a few even take a chance by testifying in their defense. But then there’s Nelson, who told jurors that he did it. He dismissed Fulford as “collateral damage.” It doesn’t take a genius lawyer to predict the verdict, but the actual sentence may surprise you.

What kind of man kills his daughter? If he did it, is there any way he could be considered innocent of murder under the law? The defense for John Jonchuck said yes. They argued that he was under a serious religious delusion when he threw his daughter Phoebe Jonchuck, 5, off of the Dick Misener Bridge in Pinellas County, Florida on January 8, 2015.

But authorities said he absolutely knew what he was doing when he did it. John Jonchuck murdered his daughter in order to spite the girl’s mother, they argued. It wasn’t a delusion, said the state. They asserted he knew the difference between right and wrong.

You know it’s a rough case when the defendant is already admitting to dismemberment. James Scandirito Jr. murdered his father James “Skip” Scandirito Sr., cut up the body, and hid him, said the state. The alleged motive: money.

The defense asserted that Scandirito Jr. found his elderly father unresponsive, and panicked because they had been doing drugs. Their client dismembered the body, but it wasn’t murder, they said. The victim’s niece bitterly remarked on this argument, saying the defense “made a joke of this case.”

Was Skylar Richardson a murderer, or just a teenager who got in over her head? Both sides of her criminal case agreed that she went into labor at her family’s home, and buried the child in the backyard. But the defense said the baby was stillborn. The prosecutor argued that this was a murder.

The defendant kept her family in the dark about her pregnancy, and even she apparently didn’t know about it until toward the end. By all accounts, Richardson long suffered from eating disorders, and the state asserted that her mother was “obsessed” with her appearance. This dynamic fueled the murder, the state said. But jurors didn’t see it the prosecution’s way.

There’s no dispute that Dallas cop Amber Guyger entered the unsecured door of neighbor Botham Shem Jean‘s apartment, and fatally shot him. Nonetheless, her defense argued that it was a reasonable mistake under the law. In this account, she parked on his floor after a long day at work, entered Jean’s apartment thinking it was hers, and believed he was an intruder.

But is that enough to convince jurors that she should evade legal responsibility for taking a man’s life? The victim was just relaxing at home when the defendant entered. The case touched on an ongoing national debate on how police treat people of color (especially black men), and whether cops are insulated from responsibility by virtue of their position. Guyger is white. Jean was black.

The children’s mother Amber Kyzer didn’t have custody of them. They were in Jones’s hands, not hers. She mourned her kids, but even she had trouble declaring whether Jones should die for what he did. Even so, jurors were able to come down with a verdict at both the guilt and sentencing phases.

The defense tried to show that this was an accident. Laila choked on a chicken bone, and Jennifer Rosenbaum only injured her while attempting CPR and the Heimlich maneuver, they said. The state argued, however, that the injuries were consistent with long-term abuse. Authorities went after Jennifer Rosenbaum as the primary abuser, while husband Joseph was accused of turning a blind eye, doing nothing more than covering the child’s wounds.

Ohio babysitter Lindsay Partin had it tough, according to the prosecution’s story. She suffered a miscarriage. Nonetheless, they argued that she went way over the line after that, by losing control and beating Hannah Wesche, 3, to death. On top of that, she confessed the crime to investigators.

Partin took the stand in her own defense. She said her confession was a lie, and that she did it to “protect everybody” amid the sudden death of Wesche. Investigators had been asking if her husband abused her. Also, she was concerned about Hannah’s father. But jurors didn’t buy her story.

Even prosecutors said murder victim “Dee Dee” Blanchard should’ve gone to prison. She forced her daughter Gypsy Blanchard to feign a slew of serious illnesses and used this facade to cheat people out of donation money. But Gypsy wasn’t sick. She was trapped at home–a prison. In her isolation, she made friends online with Nicholas Godejohn. That became a long-distance relationship, and it progressed to a brutal murder plot aimed at Dee Dee.

Perhaps Gypsy is a sympathetic figure, but even she pleaded guilty to second-degree murder in her mom’s death. Prosecutors kept going after Godejohn for first-degree murder. His defense argued that he simply wasn’t able to commit that offense because he was incapable of deliberation. His IQ was just above the learning disability benchmark. Authorities argued, however, that he was capable of making his own decisions, and that he participated in the plot just to make Gypsy Blanchard his “sex slave.”

Tex McIver was a noted Atlanta attorney. Wife Diana McIver was a successful CEO. A car ride in Atlanta would change the story of their marriage forever. The defendant was in the backseat of the vehicle when he asked his wife to give him his gun because they were in an area he considered unsafe. But the danger wasn’t from outside the car. The defendant said that he was in and out sleep when he woke up, and the firearm went off.

The defense said it was an accident, and they took advantage of the fact that the state’s expert accidentally set off an unloaded gun. The prosecution asserted that McIver didn’t call 911, however. This was murder, and the motive was money, the state argued.

[Image of Godejohn via Press Pool; screengrabs of Nelson and Guyger via Law&Crime Network]