Attorney General Bill Barr Got It Right This Time 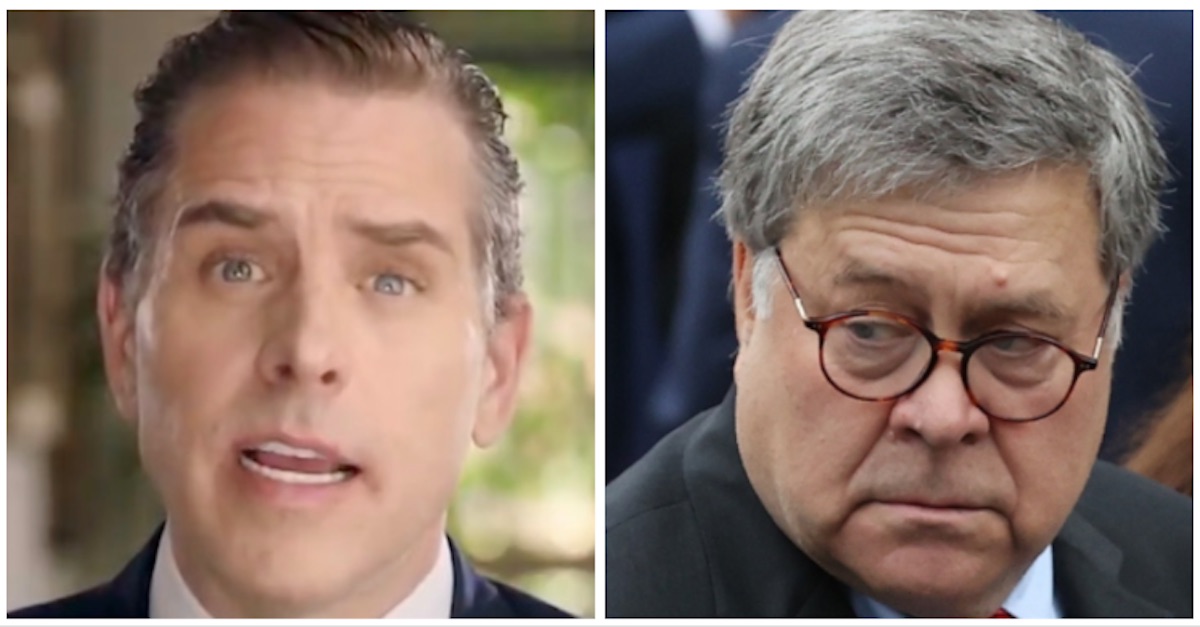 The Wall Street Journal headline on Dec. 11 announced that “Barr Kept Secrecy on Probes of Biden’s Son.” The story also reported President Donald Trump’s tweet that asked, on Dec. 10, the day after Hunter Biden announced that he was under federal investigation in Delaware, “Why didn’t the Fake News Media, the FBI and the DOJ report the Biden matter BEFORE the Election?”

Whether or not the Journal’s headline actually intended to condemn the Attorney General’s action in maintaining secrecy, the New York Post, on December 12, made clear its own view of what Barr had done: “PROBES ‘BARRED’ FROM THE PUBLIC.” And in the subtitle: “AG Kept A Lid On 2 Federal Hunter Inquiries.” The purport of the Post’s headlines and story, which quoted the Trump campaign spokesman, were unmistakable: the Attorney General was “covering this whole thing up” and not allowing the American people to know it.

We have no idea currently, of course, whether Hunter Biden is actually guilty or innocent of the conduct for which he is now reportedly under serious investigation—he himself having disclosed it for whatever reason now that election is over. And we certainly have no reason to believe that the President-elect is himself implicated in what his son may have done.

Either way, though, President Trump does, indeed, have good reason to believe that a public disclosure of the investigations before Nov. 3 (even if the disclosures didn’t implicate Joe Biden himself), might have had a serious impact on the election. After all, the Democratic candidate’s own son was under investigation for serious felonies potentially involving national security. Why, indeed, wouldn’t the President be upset by having been deprived of having been able to make indisputably “truthful” tweets heralding such bombshells in the midst of a tight election?

Still, maybe for the first time as it relates to the investigations of the president or his political opponent, Attorney General Barr was doing exactly what he was supposed to do. Despite Barr’s controversial decisions this year concerning the Justice Department taking public actions in the midst of a campaign battle that might sway the election, Barr’s decision to keep a muzzle on the Hunter Biden investigations was totally in line with longstanding Department policy, echoed by attorneys general of both parties, that the Department needs to be sensitive to Justice Department actions that might impact an election.

So, notwithstanding his seeming deviation from that overarching principle in recent months in authorizing the Department to potentially “mess with” with the election campaign, presumably at the behest of the President, Barr understandably recognized that making public in any way that candidate Biden’s son was under serious criminal investigation would invariably have undermined Biden’s electoral prospects. And so, he did his duty, no matter how much he realized that it would offend President Trump when he found out—presumably when it was too late to tweet and rally about it by the time Nov. 3 had rolled around.

But there is something way beyond that. Surprising as it may seem, Justice Department policy unequivocally forbids disclosure of pending investigations of anyone. You should never see federal prosecutors stepping up to the microphone saying that X, whether a nobody or high-profile figure, is under federal investigation, unless he or she has been arrested. Yes, such investigations, particularly of high-profile figures, are often leaked to the press for whatever reason—but only when prosecutors or their flacks have gone rogue. However, that’s a subject, and an important one, for another day. It is a bad scar, indeed, on the criminal justice system in America.

Moreover, important in an election season (although not limited to that season), it is a direct violation of law, namely, under Federal Rule of Criminal Procedure 6(e), for a prosecutor (or anyone except the subpoenaed witness), to disclose “ a matter occurring before the grand jury.” And, parenthetically, financial institutions may not disclose grand jury subpoenas even if issued directly to them. Importantly, if a court determines that such an unauthorized disclosure has occurred, the “leaker”— there’s no other word for it—can actually be found in contempt. So, assuming subpoenas have indeed been served in the Hunter Biden investigation, as probably
has occurred, for Barr to have disclosed, or permitted the disclosure of, grand jury subpoenas (even indirectly), the leaker and Barr himself would have been guilty of violating Rule 6(e). For all of Barr’s faults, and there are plenty, he truly would have irretrievably crossed the Rubicon had he countenanced such a disclosure. It might also be–not clear–that he couldn’t even have disclosed the grand jury subpoenas to the President himself.

President Trump, of course, is publicly distrustful over Barr’s sudden “disloyalty” over this. Why, after all, given Barr’s enthusiastic support for the President time and again did he suddenly become an altar boy, complying with the dictates of official policy? It’s a good question: Probably one that Barr’s unauthorized biographer will have to wrestle with. Either way, though, and for whatever reason, Barr did the right thing here and should be applauded for it—although that reaction from detractors of the President surely won’t help Barr keep his job until Jan. 20.