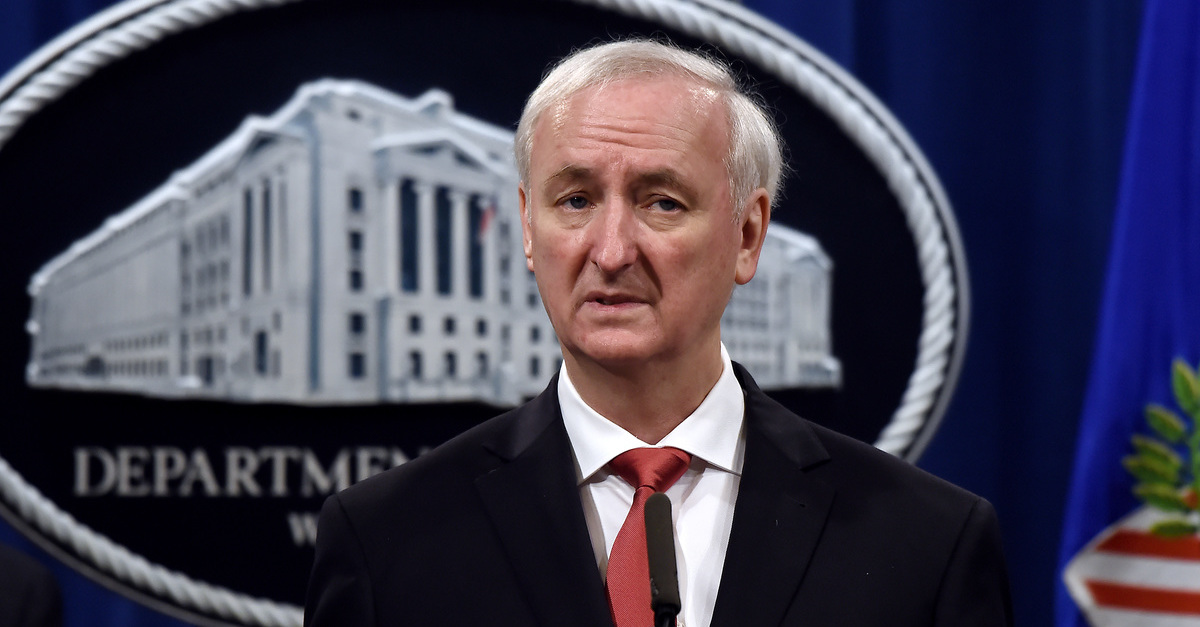 Attorney General Bill Barr is leaving his post just before Christmas, according to a letter of resignation released late Monday.

The 77th and 85th attorney general’s replacement is a committed conservative movement ideologue and pro-corporate crusader whose reliability as a company man is perhaps best understood through his lengthy career and stature in the world of big law and his quick rise through the Trump administration ranks.

Deputy Attorney General Jeffrey Rosen, who has no experience as a prosecutor, is slated to take Barr’s place as acting attorney general and will step into that role just as soon as Barr formally and officially steps down on December 23.

Formerly serving as the Trump administration’s deputy transportation secretary, Rosen assumed the role of deputy attorney general after then-deputy attorney general Rod Rosenstein–one of the most visible figures to ever hold the second-in-command post at the U.S. Department of Justice (DOJ)–resigned in early 2019.

According to CNN, the Trump administration had long been salivating to replace Rosenstein with Rosen at DOJ–but it’s unclear whether that was out of particular regard for Rosen’s legal chops or more due to general grievances with how Rosenstein handled the ultimately unsuccessful Russiagate inquiry due to then-attorney general Jeff Sessions having recused himself from overseeing that controversial investigation led by then-special counsel Robert Mueller.

Before joining the Trump administration in 2017, Rosen served as a partner at elite global law firm Kirkland & Ellis LLP, where he was one of the top attorneys at the Washington, D.C. branch.

The revolving door of big law and government service being what it is, before and after assuming his longtime perch at Kirkland & Ellis, Rosen worked as an attorney under two separate roles for the George W. Bush administration.

From 2003-2006, Rosen was general counsel for the Department of Transportation (DOT) under then-secretary Norman Mineta–who distinguished himself as both longest-serving DOT secretary in history and for his adamant “constitutional” refusal to allow U.S.-based airlines to institute formal racial-profiling–as well as ethnic-, religious- or national origin-profiling–of passengers in the aftermath of the 9/11 terror attacks due to his own experience being interned by the United States during World War II. Informally, however, the airlines did exactly that–and the Bush administration, as well as the Barack Obama administration, instituted and maintained the much-maligned “No Fly List” which largely discriminated against Muslims.

In 2006, Rosen switched gears to serve as general counsel and senior policy advisor for the White House Office of Management and Budget (OMB) where he was an integral aspect of the decades-long conservative movement fight against regulating corporations.

According to E&E News, an energy and environment focused-publication that was founded in 1998, Rosen’s time at OMB and his most recent stint at DOT were focused on regulatory rollbacks–including the Trump administration’s high-profile effort to unwind clear air rules premised on increasing fuel efficiency standards.

As counsel at DOT during the George W. Bush administration, Rosen has a record of being skeptical of environmental regulations.

Between 2003 and 2006, he sought to undo what he viewed as regulatory overreach. And in 2005, he testified about participating in the termination of 180 potential rules.

In 2006, Rosen moved to the White House Office of Management and Budget, where he served as general counsel until 2009. During that period, he was a vocal foe of EPA’s authority to regulate greenhouse gas emissions.

E&E News reported in 2008 that Rosen was one of several Bush officials who pushed the administration to scrap EPA’s well-developed plans to regulate greenhouse gas emissions from motor vehicles, power plants, petroleum refiners and other major polluters (E&E Daily, July 18, 2008).

Rosen’s former DOT profile has since been deleted or had its access restricted to the public.

Confirmed by the U.S. Senate for his current position in 2017 against apparently perfunctory complaints by some members of the official opposition party, several Democrats–including Sen. Mark Warner (D-Va.), Sen. Tim Kaine (D-Va.), Sen. Joe Manchin (D-W.V.) and Sen. Gary Peters (D-Mich.)–crossed over to help Rosen across the goal line after two GOP senators skipped the vote.

According to the Wall Street Journal, Trump has been relentlessly focused on pursuing such a course of action and it is widely-assumed that the outgoing attorney general was reticent to accede to the president’s request. The elevation of Rosen would appear to make a Biden family-focused special counsel–and one who will likely have full independence from the new administration–all but a foregone conclusion. But we will still have to wait and see. Either way, the John Durham investigation of the Russia investigation marches on.

On January 6, Congress meets to formally receive the votes of the Electoral College and entertain any objections. Bill Barr has quit before that. Also before Trump issues any pardons to family members or himself. Or more info is declassified. Probably lots of other stuff…

“No one’s going to push Jeff around,” he told the Reuters wire service in 2019. “He’ll be committed to doing his job.”