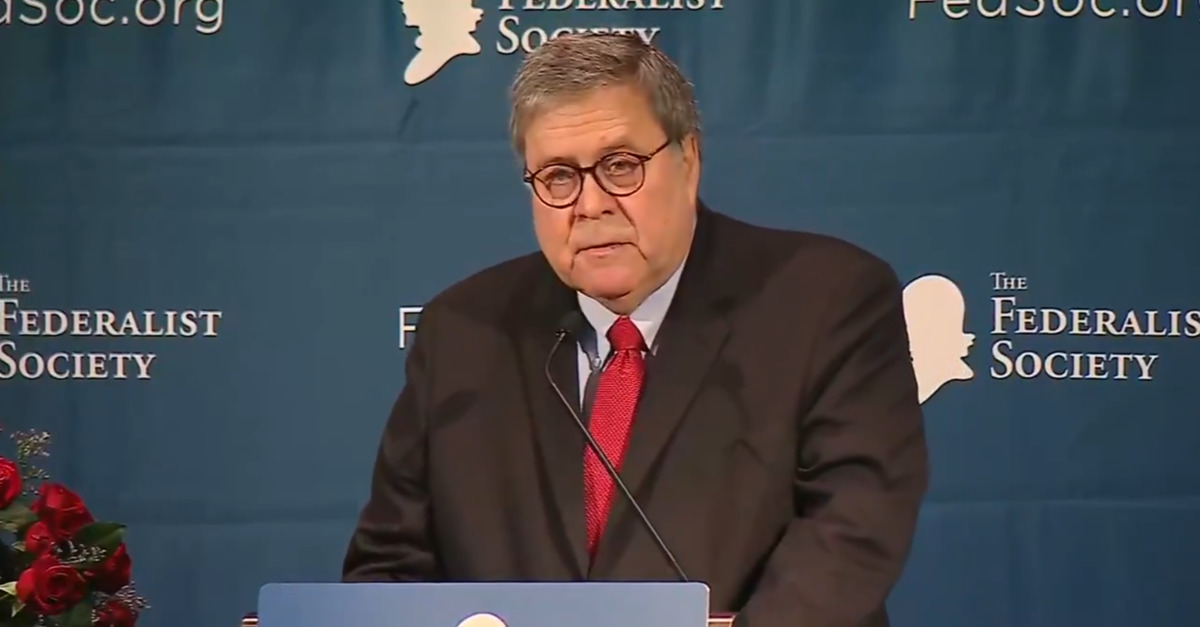 Attorney General Bill Barr launched into an emotional tirade against “the left” at an annual meeting of the conservative Federalist Society on Friday evening. Now, lawyers and legal commentators are intensifying calls for Barr’s impeachment.

Barr’s eyebrow-raising speech was widely-panned after a video of the following portion made the rounds on social media:

Unfortunately through the past few years we have seen these conflicts take on an entirely new character. Immediately after President Trump won election, opponents inaugurated what they called ‘The Resistance’ and they rallied around an explicit strategy of using every tool and maneuver to sabotage the functioning of the executive branch and his administration. The fact of the matter is: that in waging a scorched earth, no holds-barred war of resistance against this administration, it is the left that is engaged in the systemic shredding of norms and undermining the rule of law.

The Federalist Society is a judicial activism group which pushes for an “originalist” understanding of the U.S. Constitution and a return to pre-New Deal interpretations of law. The organization has been heavily involved in staffing President Donald Trump‘s judicial picks–essentially serving as a pipeline for conservative federal judges.

AG Bill Barr: “It is the left that is engaged in the systematic shredding of norms and undermining the rule of law.” pic.twitter.com/tX7pmHBhNK

“This is a very dangerous and indeed incendiary notion to import into the politics of a Democratic republic,” Barr continued before the elite group of right-wing lawyers in Washington, D.C. “The fact is, that, yes, while the president has certainly thrown out the traditional beltway playbook and punctilio, he was upfront about what he was going to do and the people decided that he was going to serve as president.”

“Bill Barr is the type of bare knuckles lawyer the Church would have hired thirty years ago to cover up sex abuse cases,” Painter added. “The bishop would have been someone like Rep. Jim Jordan. Neither of these men belong anywhere near the impeachment inquiry.”

“Yesterday AG Barr addressed a radical political group and gave one of the most vicious partisan screeds ever uttered by a US cabinet officer,” Pascrell tweeted. “Barr says trump should have king-like powers. Barr is a liar and a fanatic and should be impeached and stripped of his law licenses.”

Jeff Hauser is an attorney and the Director of the Revolving Door Project, a nonprofit focused on exposing political corruption.

In light of Barr’s speech, Hauser shared an article he previously co-authored with Max Moran calling for Barr’s impeachment.

“[I]f Democrats are going to uncover more information through aggressive hearings and ultimately impeach the president, they need to recognize their most powerful adversary: Attorney General William Barr,” the Daily Beast op-ed notes.

Barr has not just failed in his duty to carry out and enforce the law as attorney general. He has also used the power of his office to go after Trump’s enemies. We now know that he has served as a leading “diplomat” for a sort of shadow “the president is the state” foreign policy, conducted with at least the United Kingdom, Italy, and Australia. Barr is a leader in a broad administration effort to demand that U.S. allies aide Trump in legitimizing, maintaining and strengthening his personal hold on power.

“Barr, in other words, is a key target of any investigation into Trump’s seemingly criminal abuse of power,” the article continues. “This gives Democrats ample justification to zero in on the attorney general.”

The two-time attorney general also laid into critics of the controversial “unitary executive theory” of the presidency which supporters argue gives the president unfettered and total control over the executive branch.

“One of the more amusing aspects is these breathless attacks on the unitary executive theory,” Barr said, before mocking opponents.

“Instead of the ‘theory of the unitary executive’ let’s just start calling it what it is – the theory of the fascist executive,” he tweeted.

“I encourage everyone to read Bill Barr’s viciously partisan speech to [the Federalist Society],” tweeted Fordham Law Professor Jed Shugerman. “Its hackery and intellectual dishonesty is an utter embarrassment to the DOJ, [Federalist Society], and to all of us (yes, me, too) who try to be intellectually honest about textualism [and] original public meaning.”

American Civil Liberties Union attorney Josh Block noted that Barr received a standing ovation from the audience and called both speech and the praise it received “sickening.”

It’s not just that the Attorney General of the United States said these things; it’s that his audience at the @FedSoc convention gave him a standing ovation for doing so.https://t.co/3HrUMpIhar

The executive power passages were deeply hypocritical; this is downright offensive. pic.twitter.com/SFys3u6Zs6

“This is so outrageously inappropriate for an AG to be saying,” noted former federal prosecutor Mimi Rocah. “You are the head of the DOJ for all Americans not just the ones in the Federalist Society. Please start acting like it.”

Sherrilyn Ifill is the President and Director-Counsel of the NAACP’s Legal Defense and Educational Fund. She also had some words for Barr’s telling Friday speech–noting her long opposition to the attorney general.

“I have warned for some time that AG Barr is the most alarming figure in the Administration,” Ifill tweeted. “A true believer who has been waiting for his moment and pitched hard for this job. He has an agenda and political view that is lockstep with Trump.”

The incendiary speech also prompted the widespread use of #ImpeachBarr and #DisbarBarr hashtags on Twitter–criticism that was only amplified after people realized Barr’s broadside against left-leaning lawsuits and subpoenas was promoted by the Department of Justice’s official Twitter account.

Painter later called on the Federalist Society to “denounce AG Barr’s diatribe as an attack on our Constitution and on the rule of law.”

Law&Crime reached out to the Federalist Society for comment on Barr’s speech and Painter’s request but no response was forthcoming at the time of publication.