Following 19 months of research and interviews, a bipartisan coalition of legal, ethics, and national security experts on Monday released an in-depth report on the conduct and practices of Attorney General Bill Barr and an inquiry into the Justice Department’s adherence to the rule of law during his tenure. The exhaustive 267-page report, concluding an impeachment inquiry into the attorney general is warranted, found that Barr’s conduct and leadership has “compromised U.S. interests and jeopardized national security.”

The study was undertaken by the Center for Ethics and the Rule of Law (CERL), a non-partisan interdisciplinary center at the University of Pennsylvania which says it is decided promoting ethics and the rule of law in national security, warfare, and governance. The report was put together in conjunction with watchdog group Citizens for Responsibility and Ethics in Washington (CREW).

The Ad Hoc Working Group, chaired by University of Penn Law School professor Claire Finkelstein and University of Minnesota Law School professor Richard Painter, came to several troubling conclusions, among them that Barr “appears to embrace an autocratic view” of executive branch power, and sees himself as “entitled to ignore the laws, ethics, and historical practices,” normally associated with the rule of law. Barr’s legal peers, Donald Ayer in particular, have repeatedly accused the attorney general of aiding and abetting the ascent of authoritarianism in America. Ayer was a consultant on the report, which discusses anything from Barr’s handling of the conclusion of the Mueller investigation to sweeping politicization of the DOJ. Ayer and several members of the Working Group served in Republican administrations, whether under Presidents Ronald Reagan, George H.W. Bush or George W. Bush. 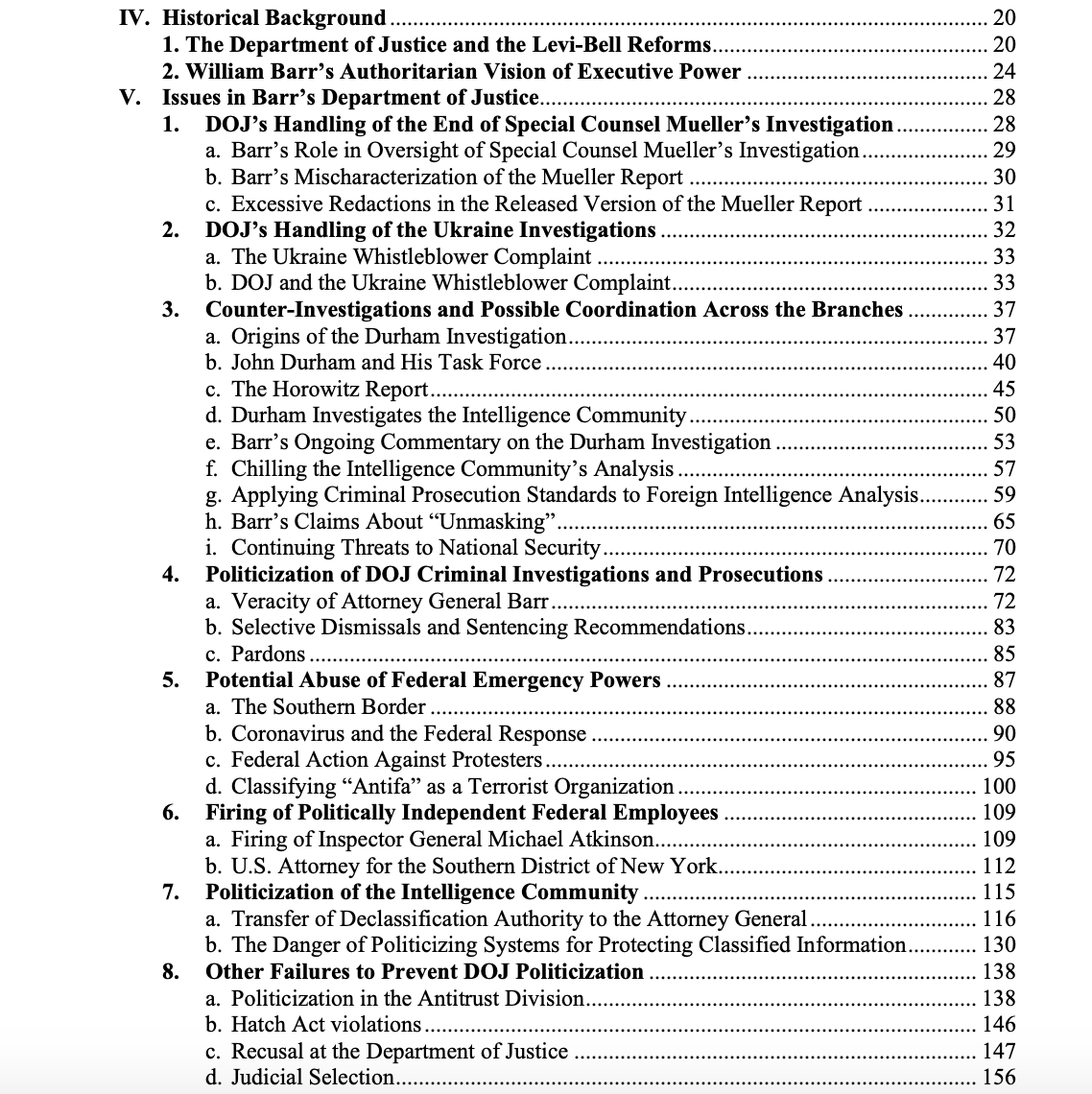 “The Working Group reached the dismaying conclusion that Mr. Barr regards the DOJ as limited in its operations by nothing other than contrary political power. There is no evidence that Mr. Barr seeks to constrain the operations of the DOJ in accordance with a view of law as a limiting principle on its authority. Law serves at best as a rhetorical tool for enhancing power rather than as a source of constraint on that power,” the report stated as one of its general findings.

The group also came to the “reluctant conclusion” that Barr has used the power of his office as “a vehicle” for supporting President Donald Trump’s political agenda, primarily through two tactics.

“Second, the attorney general appears to be willing to use the powers of his office to attempt to help with the president’s bid for re-election. These are distinct phenomena and should be analyzed separately. They raise separate and distinct concerns about the conduct of the attorney general, though both create an ethos of politicization at the DOJ.”

Highlighting Barr’s inquiry into the government’s probe of Russian interference in the 2016 presidential election, the report also said the group was concerned about the “impropriety and intentions” behind U.S. Attorney for Connecticut John Durham’s investigation and Barr’s ability to weaponize the probe for political reasons.

“Even though Justice Department policy forbids public comments on pending investigations, Attorney General Barr has repeatedly given interviews on Fox News and elsewhere about the counter-investigations, especially the Durham investigation,” the report stated. “One of the clearest and most overriding concern of the Working Group to come out of the present study is concern about the intended use of the counter-investigations against political enemies of the president, especially in the immediate run up to the election. The Working Group expressed grave concerns that Mr. Barr is attempting to use these investigations for the purpose of announcing high level indictments in the immediate run up to the November elections.”

Reasoning that there are no alternative routes for addressing Barr’s misconduct, the group called on the House to open an impeachment inquiry into the attorney general.

“The conduct described in this Report is more than enough to justify opening such an impeachment inquiry and we recommend that the House Judiciary Committee do so at once,” the group wrote. “Potential charges include abuse of power, obstruction of Congress and obstruction of justice. If there is sufficient evidence of high crimes and misdemeanors by the Attorney General, the House should then vote out articles of impeachment against the Attorney General.”