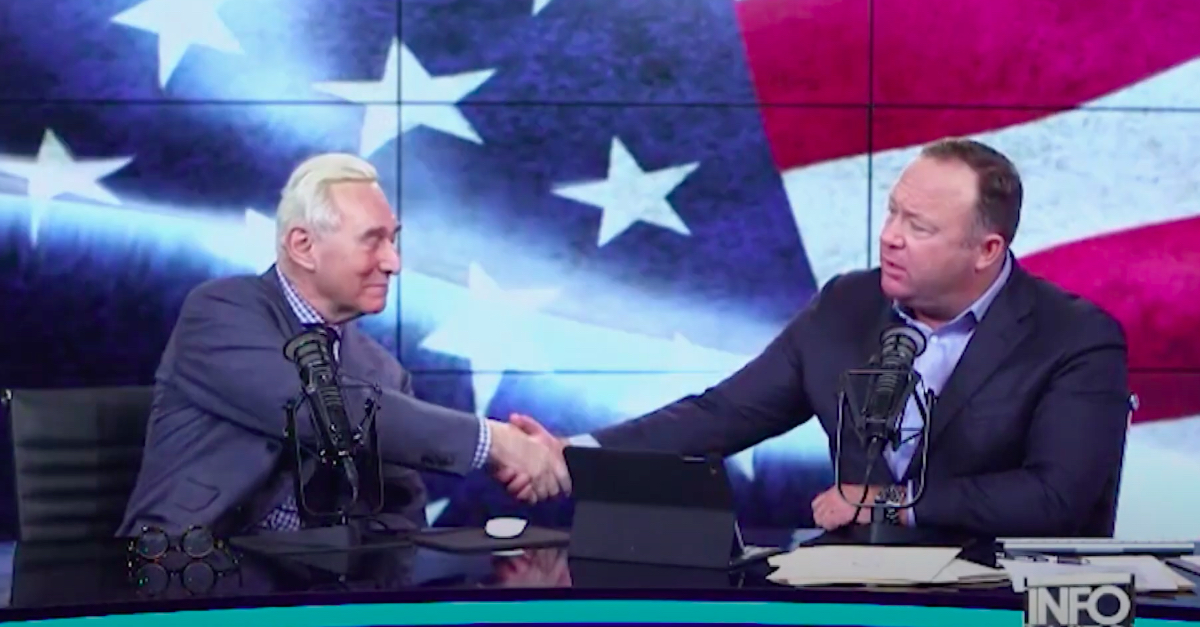 Officials with the Department of Justice and the FBI are investigating the role right-wing conspiracy theorist Alex Jones and political operative Roger Stone played in the Jan. 6 riots at the U.S. Capitol in Washington, D.C., the Washington Post reported Saturday.

Several people familiar with the investigation told the Post that authorities are looking into both the now-pardoned Trump advisor and the Infowars host as part of a wider examination of the Capitol rioters’ “paths to radicalization.” Although criminal charges against Stone and Jones have not been ruled out, it appears that the investigation may be particularly beneficial in helping prosecutors reveal the motivations and intentions of those charged in the insurrection.

“We are investigating potential ties between those physically involved in the attack on the Capitol and individuals who may have influenced them, such as Roger Stone, Alex Jones and Ali Alexander,” one U.S. official speaking on the condition of anonymity is reported to have told the Post.

A popular far-right political commentator and convicted felon, Alexander was one of the primary organizers of the pro-Donald Trump “Stop the Steal” rally that immediately preceded the Capitol breach. In a since-deleted video posted to social media, he said he “schemed up” the march on the Capitol to put pressure on members of Congress who were ratifying Joe Biden’s Electoral College victory.

“All three amplified and intensified Trump’s incendiary claims that the 2020 election was illegitimate in the weeks leading up to the riot. But Stone and Alexander have directly credited each other with inspiring and planning the pro-Trump Stop the Steal campaign, with Alexander saying he came up with the idea and helped organize the Jan. 6 rally that drew Trump supporters to Washington,” the report stated. “Stone and Jones also promoted the extremist groups Proud Boys and Oath Keepers and had preexisting business or personal ties with members the government has charged with coordinating and planning certain parts of the breach or with violence at an earlier Trump rally, records and documents show.”

Stone, who claimed he declined an offer to lead a Jan. 6 march to the Capitol, was caught on video that morning surrounded by members of the Oath Keepers, a far-right paramilitary organization that enrolls current and former military, police, and first responders into its ranks. Several members of the group have since been charged in connection with the Capitol riots, including six of the members who provided security for Stone just hours earlier.

On the day of the Capitol riots, Stone and Alexander marched from the Ellipse to the Capitol together; during the trip, Alexander told Trump supporters to “Get down to the U.S. Capitol” on “orders from POTUS.”

According to the Post, video from the Capitol depicted Jones saying, “Let’s not fight the police and give the system what they want.” It later showed him apparently trying to trick rioters into leaving the Capitol building by telling them Trump was about to give another speech.

All three for months had promulgated Trump’s false claims that he was the winner of the 2020 presidential election.

Law&Crime emailed Roger Stone and an attorney for Alex Jones for reaction to the Washington Post‘s report.  No response has been received.  If that changes, we will update this report.