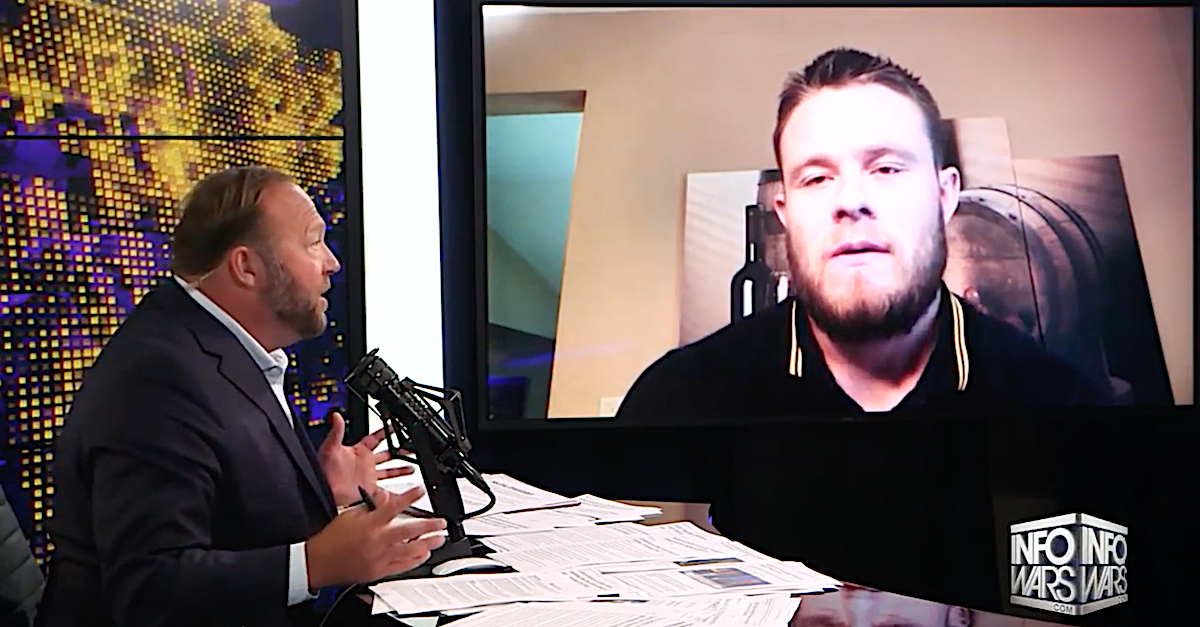 A Washington State man accused of playing a role in the Jan. 6 siege on the U.S. Capitol has spent a lot of time talking to Alex Jones on InfoWars.

Ethan Nordean, also known widely on air and online by the pseudonym Rufio Panman, is accused by federal prosecutors of four distinct crimes related to the deadly assault on the legislative seat of government: (1) aiding and abetting injury or depredation against government property; (2) obstructing or impeding an official proceeding; (3) knowingly entering or remaining in a restricted building or grounds; and (4) violent entry and disorderly conduct on capitol grounds. Federal court records say he was arrested Wednesday, Feb. 3, in the Western District of Washington.

Embedded in an affidavit prepared by an FBI special agent is a screenshot of Nordean appearing on InfoWars. The affidavit is on file with Nordean’s charging document. 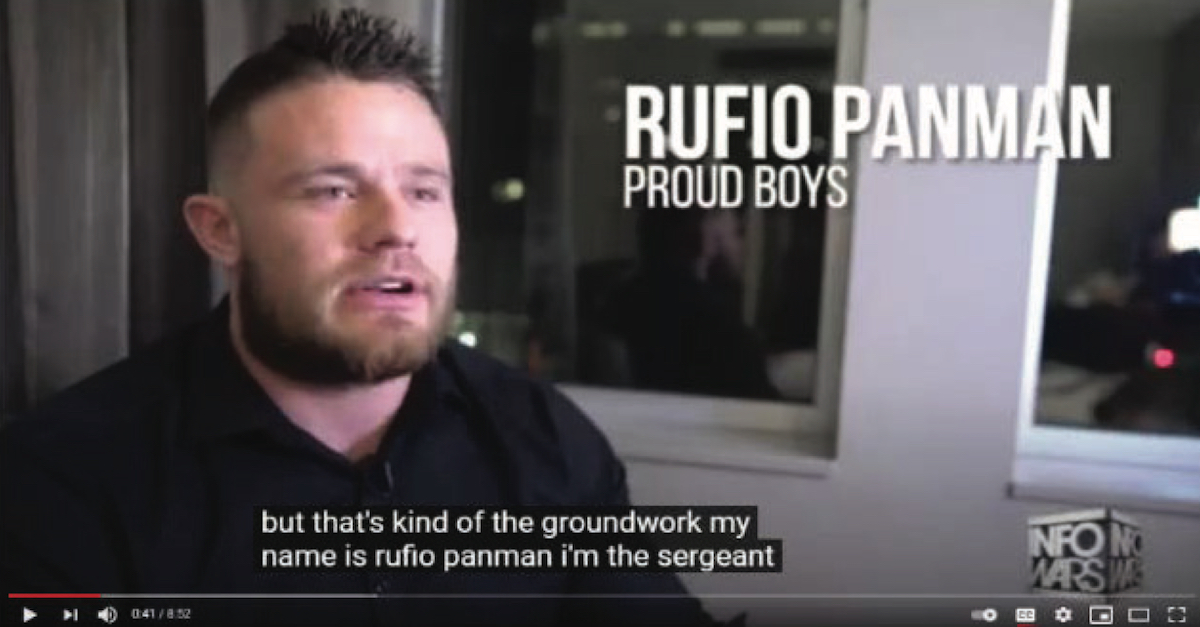 ‘Rufio Panman’ is seen in an InfoWars screen capture embedded within a federal court document.

The image appears to have been included in the affidavit primarily for identification. The document alleges that Nordean “is the self-described ‘Sergeant of Arms’ of the Seattle Chapter of the Proud Boys,” which the caption embedded in the video seems to support. The image also contains a clear view of Nordean’s face for comparison to other images from the Capitol Complex which federal agents reviewed.

InfoWars is not otherwise directly referenced in the affidavit against Nordean. However, the agent notes that the affidavit was prepared to merely establish probable cause and not to include every fact known to the government about Nordean.

Prosecutors allege that Nordean’s online “posts prior to January 6, 2021, indicate that he and other Proud Boys members were planning in advance to organize a group that would attempt to overwhelm police barricades and enter the United States Capitol building.” They further noted that Nordean posted on Parler in the days leading up to the siege that he needed help with “safety/protective gear” or “communications equipment” because “things have gotten more dangerous for us this past year.”  Nordean is also said to have posted claims that people were making “war” against the Proud Boys.

“And fight we will,” Nordean further said.

Nordean suggested that the Proud Boys were more effective than the local police force at quelling violence. Thus, he blurred the line between a self-organized group and a law enforcement organization created by the government pursuant to a statute or ordinance.

“The police are starting to become a problem,” Nordean is quoted as saying.  That bothered him because “we’ve had their back for years,” he said regarding the police.

Law&Crime independently reviewed another appearance Nordean made with Alex Jones on InfoWars.

During the appearance, host Alex Jones repeatedly played video of Nordean punching a man at a protest in Portland, Ore., in 2018. The punch was widely reported elsewhere as well. Jones identified his guest only by the pseudonym Rufio Panman during the broadcast (we will identify him by his legal name for ease of reading). 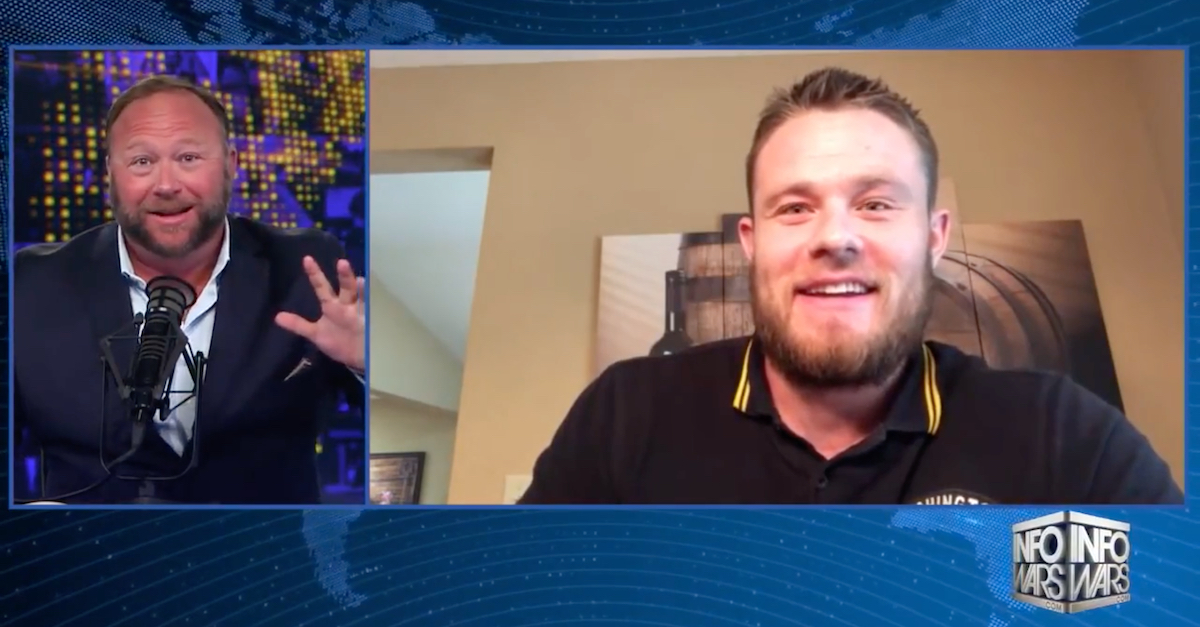 Jones said Nordean was participating in a so-called “prayer march”—which Jones also referred to as a “battle ground”—when Jones said Nordean was approached by an opponent wielding an “extendable metal baton that can break arms, put out eyes.” Jones suggested the opponent was a “warrior” from Antifa, a “meth head,” a “communist,” and a “globalist minion” who was too weak to withstand Nordean’s counter-attack.

“We salute you; everybody loves you,” Jones said of Nordean at the time. Jones also called Nordean a “folk hero” who was on the right side of a “good versus evil” battle.

“I’ve been doing this for a little over a year now; um; been to many rallies up and down the west coast, from Seattle to Berkeley,” Nordean said. “So, you know, I — it’s — facing Antifa isn’t, uh, unfamiliar to me. Um, but, the Portland rally last weekend was obviously probably one of the most violent I’ve seen. Um, it’s — you know — as far as the police standing down, none of that should have have happened.  If that would have had happened in Seattle it would have been a whole different story.  The police are a lot better there. Um, so, you know — I was genuinely worried for the people around me and their safety.”

“This a continual problem we’re having, and, like you said, uh, this is a — at least a very soft civil war right now, and if people don’t start to kind of wake up to what’s going on it’s going to progress into something worse,” Nordean also said.

There have been ongoing clashes between Antifa adherents and right-wing groups in Portland for several years, Oregon Public Broadcasting recently noted.

Nordean said he originally started to go to hot button events to try to “find middle ground” with “these people” — referencing Antifa activists. “You start to kind of develop this — this feeling that these are no longer people who are necessarily Americans, per se, but they’re kind of anti-American, and, you know, you have to separate yourselves from them.”

Jones referred to the people Nordean was battling as “the enemy” which was engaged in a “war against America.” Jones further said it was impossible to “speak to them as humans” because they only “listen to  your fist smashing into their face.”

Nordean said more “patriots” needed to “show up in numbers” to such altercations.

Video of Nordean punching an alleged member of Antifa kept playing over the conversation on a slow-motion loop.

“I just love how you giant roundhouse right hook and then shove him down so his head hits the pavement,” Jones said while explaining the video. “That probably hurt him worse.  God, I gotta love it.  I gotta tell you.  It’s better than a fake Rocky movie. I mean — I’m sorry. He’s a scumbag, man!  Trying to kill you with a baton!  And he’s a piece of crap . . . it’s just . . . it’s beautiful!”

“I appreciate that, Alex,” Nordean said. 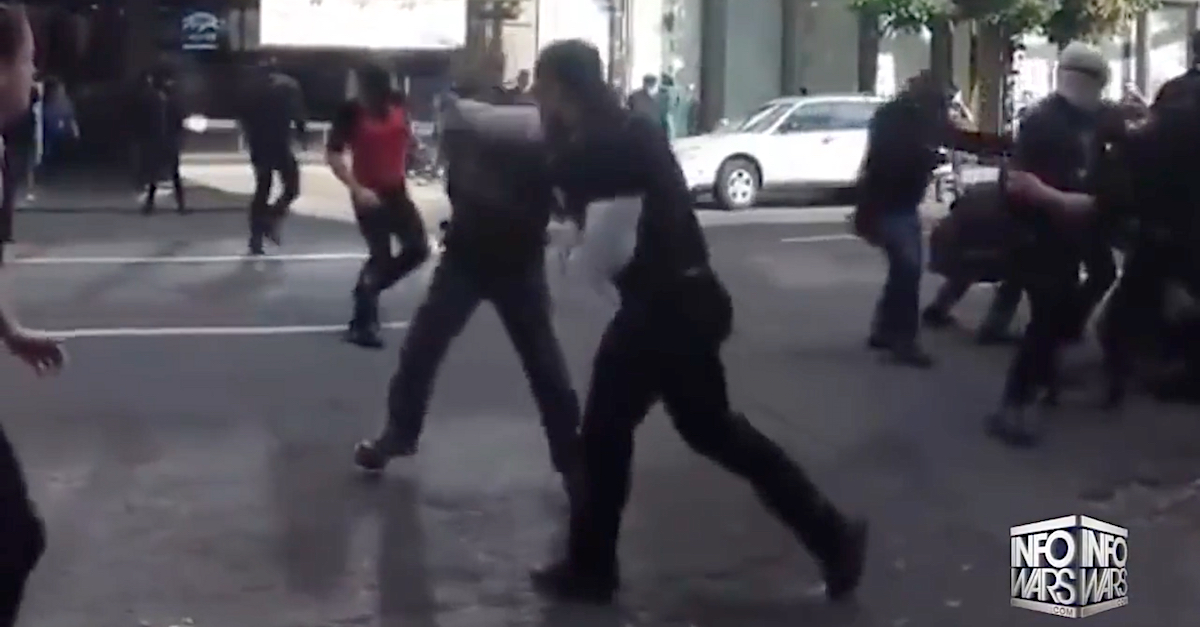 Jones said he didn’t like to “hurt innocent people” but suggested the punch was justified as self defense.  He asked Nordean how “good” it felt.

He said it was a “positive feeling” to “overcome” someone “in the moment.”

Nordean said Antifa “had no fighting etiquette” because their tactics could have resulted in innocent people being injured at the protest.

“You just have to eliminate them as a threat,” Nordean said of the people he was fighting.

“Proud Boys did an amazing job,” he later said in a more broad reference to the 2018 events.  “I can’t imagine what would have happened if we weren’t there.”

Nordean and Jones then went on a tangent to bemoan the concept of “toxic masculinity” and a perceived lack of “feminine” women in America.

Jones asked Nordean what “stirred” his involvement with the Proud Boys.

Nordean said he was born and raised in Washington; that he had a “great — good family,” that he was “pretty productive all my life,” and that he has always loved his country.  He said he “got involved with the movement” last May Day (presumably May 1, 2018) because he “was tired of what” he was seeing.

He said the “Proud Boys allowed me to network with like-minded men” and that joining the group “was one of the best decisions” he’s “ever made.” He descried his involvement as an “awakening to what’s really going on, desensitizing myself, getting out of that political correctness state of mind.” 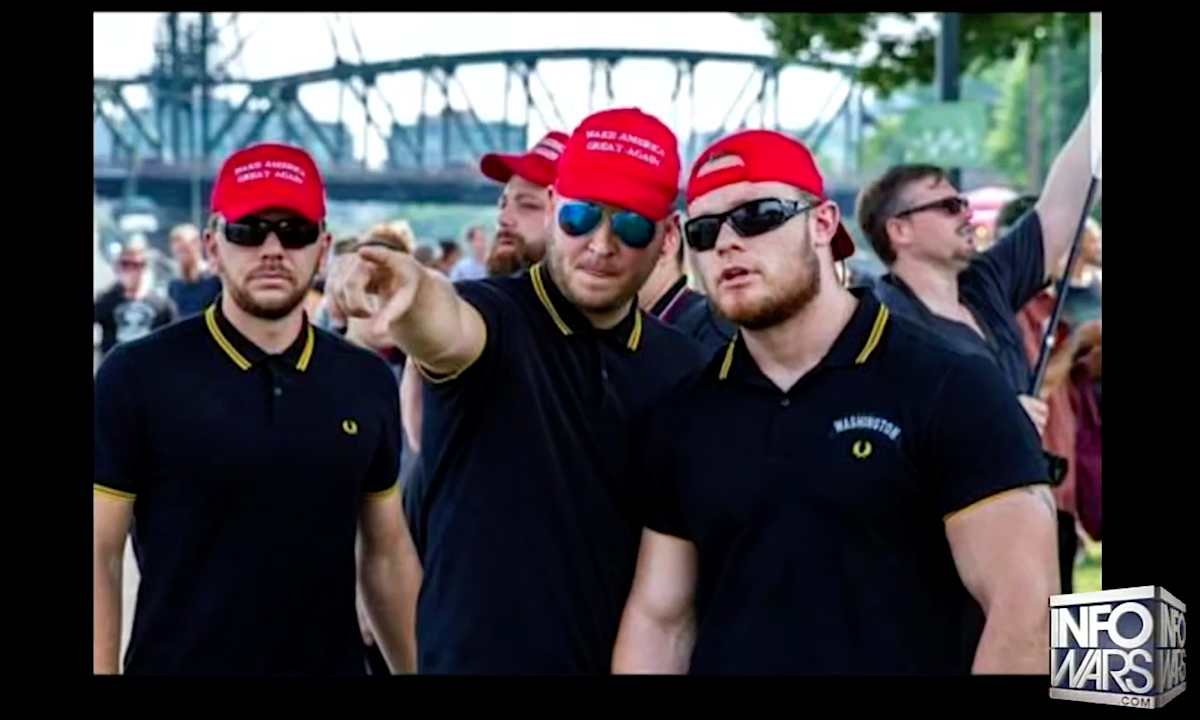 ‘Rufio Panman’ (right) and other members of the Proud Boys are seen on an InfoWars broadcast wearing ‘Make America Great Again’ hats.

After a break, Nordean said Antifa protesters were ineffective because they spent their time “playing video games” rather than engaging in authentic combat training.

He said the Proud Boys didn’t use weapons and were checked by the police to ensure they were not carrying such items, including pepper spray, but that Antifa showed up with weapons and ammunition.

“We come in with protective vests and eyewear, and that’s about all we can do; and we come in and just charge them and hope for the best; um obviously this is something we’re pretty acclimated to; so you know I gotta keep giving honor to my boys,” Nordean said.

Jones said Proud Boys’ actions were “heroic” because the police were “cowards” and were “trying to make an example” of the group whose members are now under federal scrutiny in both the U.S. and in Canada. He went on to quote Bible passages in an attempt to justify the Proud Boys’ conduct.

“Great men need to keep standing strong,” Nordean said while accusing Portland’s mayor and officials of “siding with criminals” on the other side. He also claimed the police were on his side because they were disgusted at alleged orders to “stand down” during the 2018 events.

Jones claimed a “liberal civil war” was being launched and referred to Nordean’s assessments and tactics as being “spot on.”

Panman accused Rep. Maxine Waters (D-Calif.) of inciting the left wing by calling for violence—and cast himself as among a small force which resisted it. (Waters’ actual comments have been thoroughly explained and explored elsewhere.) He said he was “overjoyed” when Trump was elected in 2016 and had “never celebrated more.”

Nordean also said he was standing up for the freedom of Americans of “all races” to associate with any “sexual orientation” and accused liberals of trying to take control over that “freedom.”

Nordean’s father emailed The Oregonian on Wednesday to say that the family “tried for a long while to get our son off the path which led to his arrest” over the Jan. 6 siege on the U.S. Capitol, but that the family’s efforts were “to no avail.”

“Ethan will be held accountable for his actions,” Mike Nordean told the newspaper.

Nordean is being represented by a public defender because a judge decided he couldn’t afford to pay for an attorney.

Federal prosecutors have summed up his activities at the U.S. Capitol on Jan. 6, 2021 as involving at least one “Crime of Terrorism.”

[images via screen capture from InfoWars]