‘So I Can Bring My Gun?’: New Charges Allege Married Couple Conspired with Oath Keepers in Preparation for Capitol Siege 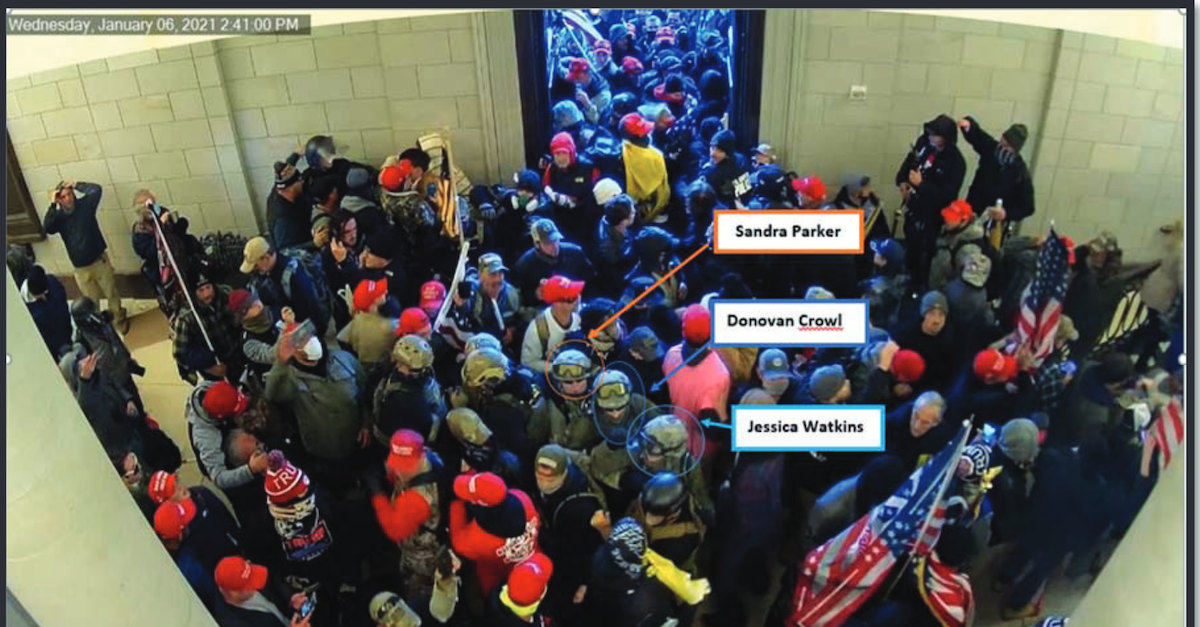 Inside an indictment leveling heavy charges against three Oath Keepers in connection with the Jan. 6th siege, prosecutors described their communications with recruits in Ohio. More of that story can now be told in a criminal complaint showing two Buckeye State recruits swapping notes about what kind of weapons they planned to bring to the U.S. Capitol.

Charged on Thursday, 60-year-old Sarah Parker and her husband Bennie Parker, 70, can be seen preparing for the invasion of the Capitol with Jessica Watkins, whose indictment shows her telling an Ohio recruit in a misspelled missive on Nov. 9: “I need you fighting fit by innaugeration.”

It remains unclear whether Watkins was talking to either of the Parkers in that message, but court papers reveal that Bennie Parker texted Watkins two days later about preparations for the so-called Million MAGA March in Washington, D.C.

Prosecutors say that Watkins replied about one-minute later: “Not into the city, no. Just mace, tasers and nightsticks.”

Two days after Christmas, Bennie Parker allegedly wrote Watkins: “”I may have to see what it takes to join your militia, our[s] is about gone.”

That is one of more than a dozen messages quoted by prosecutors as 2020 drew to a close, including the following exchanges on Dec. 26 and 27.

Bennie Parker to Watkins: Is [sic] any of your members going to Washington on January 6?

Watkins to Bennie Parker: We are trying to, weather dependant. [sic] West Virginia/Maryland mountains are treacherous to drive Sandi and I want to go but would like to possibly meet with you and go with you guys. Safety and parking issues to name a few.

Bennie Parker to Watkins: I am seeing now that if you can’t make it to Washington then we should go to our state capital.

Watkins to Bennie Parker: Roger that. Parking is no issue, if you roll with the militia we have a guarded Rally Point

On Dec. 29 and 30, the two of them discussed formally making the Parkers members of the Oath Keepers.

A far-right paramilitary organization, the Oath Keepers enroll current and former military, police, and first responders into their militia, which has been in the sightlines of counterextremism watchdogs like the Anti-Defamation League for their habit of showing up at scenes of civil unrest in battle fatigues.

Some three days before the riot, the duo discussed what combat gear and weapons to bring to the siege, prosecutors say.

According to text messages quoted in court papers, Watkins reversed herself on the subject of leaving the weapons at home during an exchange on Jan. 3, where she and Parker used military abbreviations for a “quick reaction force” and “battle dress uniform.”

Watkins to Bennie Parker: We are not bringing firearms. QRF will be our Law Enforcement members of Oathkeepers.

Watkins to Bennie Parker: Pack Khaki/Tan pants. Weapons are ok now as well. Sorry for the confusion. We are packing the car and heading your way shortly

Bennie Parker to Watkins: We don’t have any khakis[.] We have jeans and our bdu’s[.] So I can bring my gun?

Prosecutors claim that their coordination continued immediately before, during and after the Capitol siege. Court papers show surveillance video of the group inside the Comfort Inn Ballston in Arlington, Va., where the militia members are said to have assembled in the pre-dawn hours before the riot. Still frames inside the hotel were taken between 5 and 5:25 a.m., with the recruits circled in yellow. 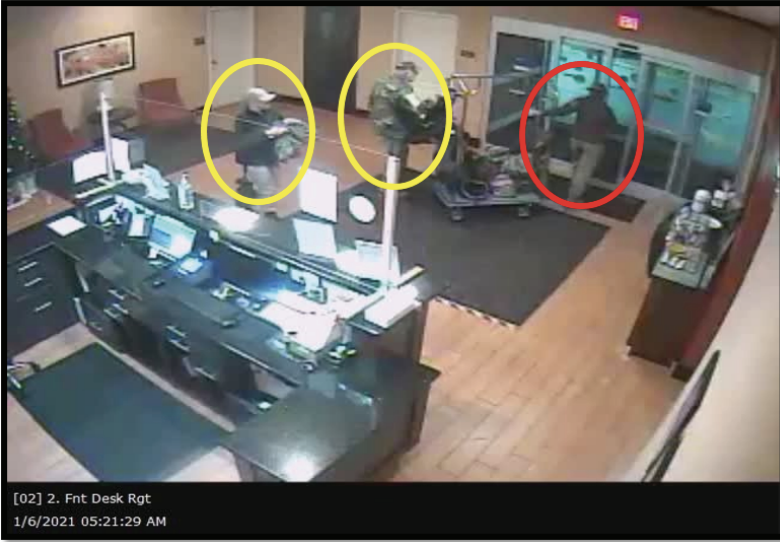 Prosecutors cite footage dissected by the New York Times and Parler videos assembled by ProPublica to track the couple’s movements on the day of the riots, and the text messages showing Watkins keeping an eye on the FBI Most Wanted List in the aftermath.

Watkins to Bennie Parker (1/9/21): I’ve been following FBI wanted list, seems they’re only interested in people who destroyed things. I wouldn’t worry about them coming after us.

Bennie Parker to Watkins (1/9/21): I’m sure they’re not on us see some pics but no militia

Watkins would later be charged with fellow Oath Keepers Thomas E. Caldwell and Donovan Crowl on Jan. 19th, with prosecutors using their social media boasts against them. The Parkers’ docket was unsealed in the Southern District of Ohio on Thursday, with the couple quickly transferred to a different federal jurisdiction Washington, D.C.

Read their criminal complaint below: