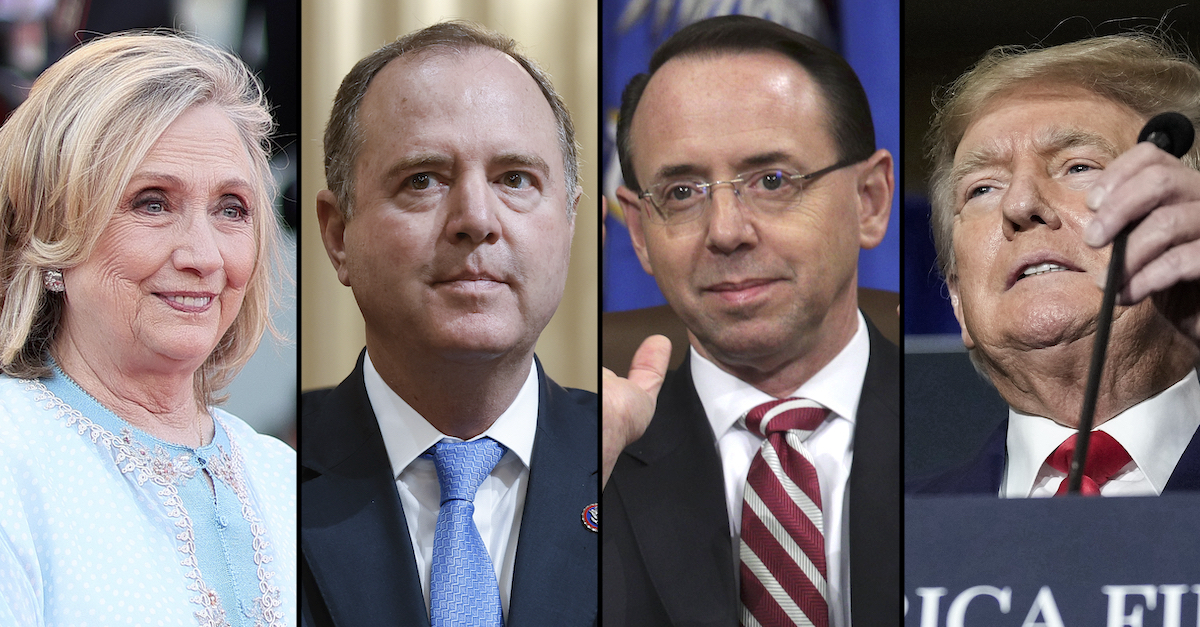 A federal judge on Friday reminded Donald Trump’s lawyers that they missed an important filing deadline regarding government efforts to dismiss itself as a substitute defendant for Rep. Adam Schiff (D-Calif. 28) and former Deputy Attorney General Rod Rosenstein in RICO civil lawsuit against Hillary Clinton and a number of the ex-president’s perceived political foes.

Accordingly, U.S. District Judge Donald M. Middlebrooks took matters into his own hands by giving Trump’s lawyers one more chance to keep their case alive against the U.S. government as a substituted party for the congressman and the ex-Department of Justice official.

Middlebrooks noted that he was waiting for a response on that final issue but that none was forthcoming by the ordered deadline:

Plaintiff’s response to the United States’ motion was due on September 1, 2022. The record does not reflect that Plaintiff has filed a response, nor has Plaintiff moved for an extension of time to do so. In the interest of rendering a fully informed ruling on the issues raised in the United States’ motion, I will accept a late-filed substantive response, if Plaintiff chooses to submit one. To this end, I will extend the filing deadline to September 6, 2022.

In other words, a failure to respond will likely be fatal to the claims connected to Schiff and Rosenstein.

The legal maneuver lurking in the background is called Westfall Act substitution.  The procedure allows the federal government, at its request, to step into the shoes of its employees when they are personally sued for acts undertaken in connection with their employment or official business as government agents.

Judge Middlebrooks explained how the law works in a previous document:

The Westfall Act accords federal employees absolute immunity from common-law tort claims arising out of acts they undertake in the course of their official duties. The Westfall Act empowers the Attorney General (or his delegate) to certify that the employee was acting within the scope of his office or employment at the time of the incident out of which the claim arose. Upon such certification, the employees are dismissed from the action and the United States is substituted in their stead. This is automatic . . . [t]he United States remains the defendant unless and until the district court determines that the federal officer originally named as defendant was acting outside the scope of his employment.

Here, the government certified that Trump’s lawsuit arose from alleged acts that were, in its opinion, connected to the official duties of Schiff and Rosenstein.  That certification triggered the Westfall Act, and Judge Middlebrooks was obliged to accept the substitution request.

The triggering of the Act could be reversed, and the judge could resurrect Schiff and Rosenstein as personal defendants, if Trump’s lawyers successfully argue that both men were acting outside the scope of their employment while committing the alleged wrongs.

The next step in the broader lawsuit is this:  Middlebrooks must decide whether the government (as a substituted party) should remain as a defendant or dismissed from the case as a whole.  That’s the issue Middlebrooks reminded Trump’s lawyers they needed to either argue or risk losing by what in essence would be a form of a default judgment.

Trump’s attorneys did file an opposition motion this week to an attempt by defendant Business Intelligence LTD’s motion to dismiss itself from the case. That defendant is one of several corporations ensnared in the sprawling lawsuit.

The case alleges that myriad actors engaged in a racketeering conspiracy and committed a laundry list of more than a dozen torts against Trump in connection with the 2016 presidential election — which Trump won.  Those alleged harms, the lawsuit claims, are redressable by a $24 million damages payment to Trump.

Almost all of the defendants immediately sought to dismiss the case by arguing that the statute of limitations for the alleged torts had long since expired.  Trump’s attorneys countered with a novel request:  they said the court should use its “equitable” powers to toll, or pause, the statute of limitations during Trump’s entire four-year presidency.  The argument, when boiled down to low gravy, is that Trump was too busy being president to file the case at an earlier date.

The issue surrounding the statute of limitations remained — and still remains — outstanding as the U.S. Government moved to dismiss its employees as defendants through the aforementioned substitution process.

Other defendants taken off the hook personally and substituted with the U.S. Government include Comey, McCabe, Strzok, Page, and Clinesmith.

With the government so substituted as the proper party defendant, the government has asked Middlebrooks to dismiss the case entirely — largely because Trump’s lawyers didn’t pursue the tort claims against the government in the proper administrative forum under the Federal Tort Claims Act.

A copy of the judge’s order regarding the missed deadline is embedded below: