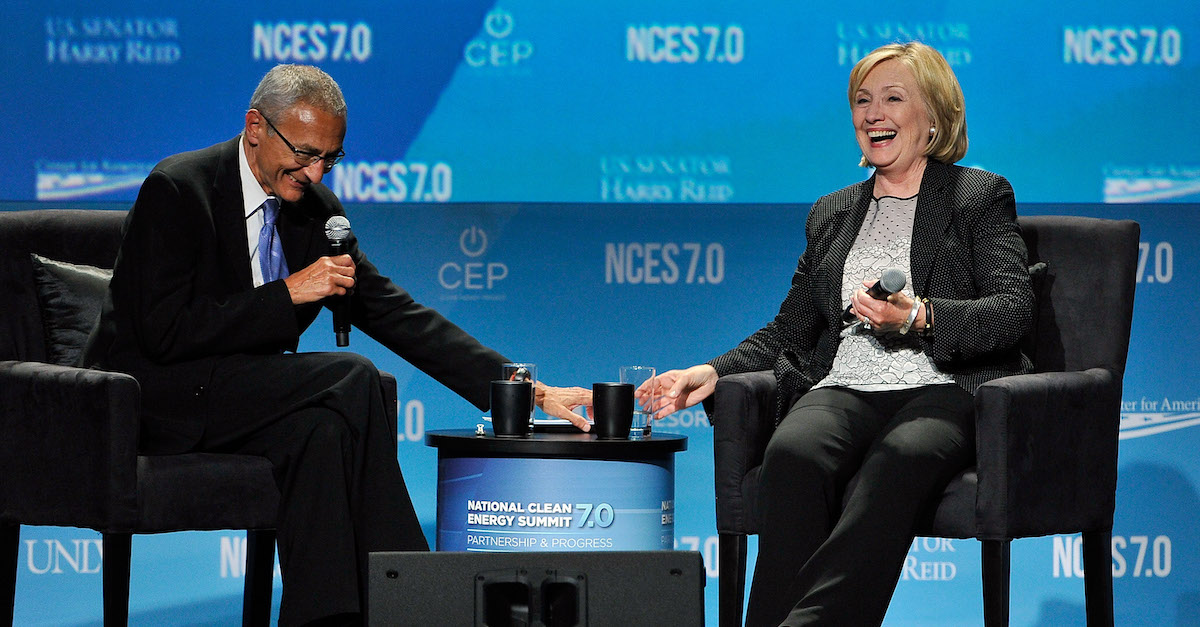 John Podesta, the chairman of Hillary Clinton’s 2016 presidential campaign, on Wednesday move to dismiss a sprawling lawsuit against him by Donald Trump. Trump sued Podesta and a large collection of other defendants, including Clinton personally and her campaign itself, for actions allegedly taken in connection with the 2016 election.

“Defendant moves to dismiss on the grounds that Plaintiff’s claims are time-barred on the face of the complaint, and each of Plaintiff’s claims against Defendant fail on the merits,” Podesta’s lawyers wrote as to the three claims in Trump’s widely skewered original lawsuit that name Podesta.

Podesta’s seven-page motion to dismiss, filed by attorneys Robert P. Trout and Paola Pinto, borrows heavily from a motion to dismiss filed by Hillary Clinton on April 20. It argues — as did Clinton — that the statute of limitations bans many of Trump’s claims.

It continues by arguing that Trump’s own Twitter history prevents him from moving forward in court (some citations omitted):

As articulated in Section I of Defendant Hillary Rodham Clinton’s Motion to Dismiss, Plaintiff’s claims relate to events that occurred in 2016 and 2017, as such the statute of limitations has long expired. Indeed, the factual allegations as to Defendant John Podesta relate to a meeting that occurred in 2017, statements made in October 2016, and social media posts in October 2017. The allegations that Defendants conspired to (1) create the Steele Dossier, (2) obtain and reveal internet data of a connection between Trump Tower and Alfa Bank, (3) provide false statements to law enforcement, and (4) disseminate false and injurious information, are all alleged events that occurred over four years ago. Moreover, Plaintiff’s own Complaint and his tweets demonstrate that he has been aware of the purported injuries for years.

The statute of limitations for conspiracy to commit RICO violations (Count II) is four years and runs from the date the injury was or should have been discovered. Lehman v. Lucom, 727 F.3d 1326, 1330 (11th Cir. 2013). On October 29, 2017, Plaintiff tweeted about the same conspiracy which he now alleges in the Complaint. Plaintiff’s own statements reveal that he was aware of the alleged conspiracy and injury more than four years ago, therefore, his claim is time-barred and should be dismissed.

The Podesta motion also joins Clinton’s motion to dismiss by arguing that several of Trump’s claims, including RICO conspiracy, simply “fail on the merits.”

Plaintiff has not plausibly alleged sufficient facts regarding any purported agreement between Defendant John Podesta and other entities or persons to engage in the ongoing criminal conduct of an enterprise. In fact, the non-conclusory allegations as to Defendant are limited to discrete public statements and a single meeting. The allegations concerning Defendant’s public statements are wholly irrelevant to establishing an agreement to engage in a RICO conspiracy. The allegation of a meeting between Defendant John Podesta and Glenn Simpson after the Steele Dossier was published to “compare notes on Russia meddling in the election” is not sufficient to establish any alleged illegal agreement to violate a substantive provision of the RICO statute. The alleged meeting occurred after the alleged conspiracy, and Plaintiff does not specifically allege the meeting was in any way connected to the conspiracy. Moreover, Defendant was himself a victim of Russian interference in the election. Defendant allegedly discussing Russian interference in the election is thus not only entirely innocuous but also irrelevant to establishing a conspiracy in this context. Plaintiff’s allegations of Defendant’s insignificant conduct, absent a plausibly-alleged “meeting of the minds,” fail to “nudge[ his] claims across the line from conceivable to plausible.”

Podesta further argues that Trump’s injurious falsehood claim must also fail because it involves allegations of political speech which are protected by the First Amendment. He goes on to rubbish Trump’s malicious prosecution claim by reminding the court that Trump was never criminally prosecuted for anything.

“Plaintiff failed to identify any criminal proceeding that terminated in his favor,” the motion argues after articulating the legal standard for a malicious prosecution claim. “Plaintiff cannot plausibly allege a lack of probable cause for the Crossfire Hurricane investigation.”

Accordingly, Podesta asked the judge to toss Trump’s claims against Podesta with prejudice — meaning they cannot be re-filed in the future.

Prior to managing Hillary Clinton’s campaign, Podesta was the former White House Chief of Staff under Bill Clinton and a former counselor to Barack Obama.

Read the motion to dismiss below: