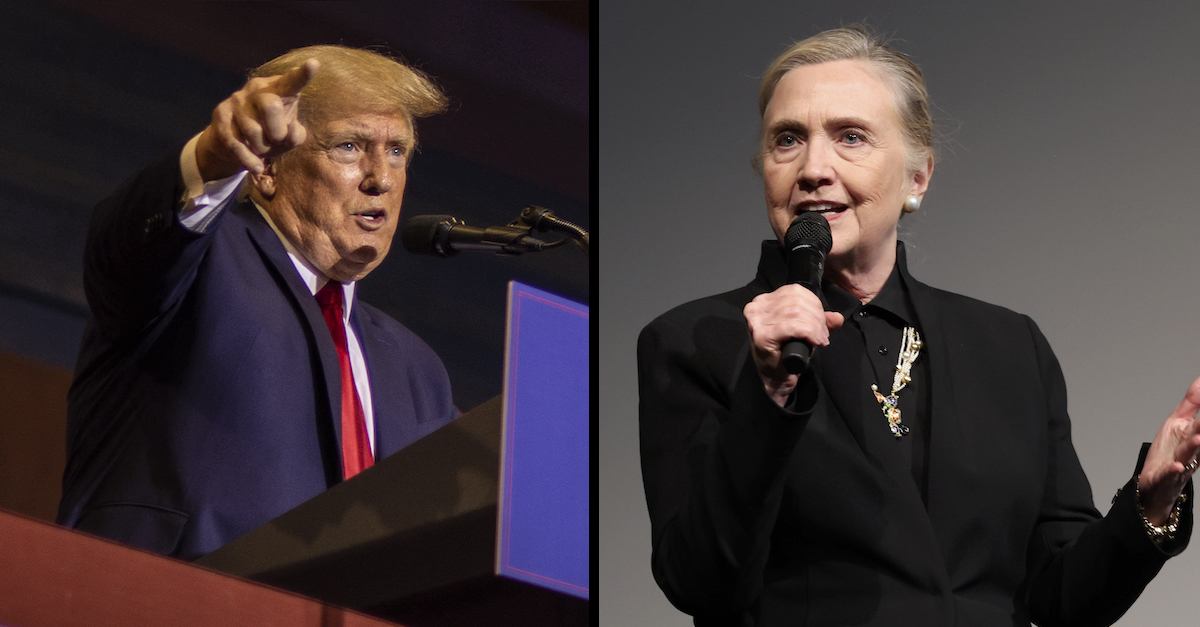 A sprawling federal lawsuit by Donald Trump against his former political opponent Hillary Clinton and others connected to the 2016 election ballooned from an original 108 pages to a current 193 pages via the filing a first amended complaint by Trump’s attorneys on Tuesday.

The revamped lawsuit seeks to sidestep the applicable statute of limitations, a legal mechanism which stops lawsuits dead in their tracks if they are filed beyond a certain time. Most, if not all, of defendants in Trump’s lawsuit have asserted statute of limitations defenses as a complete bar to many or all of the claims the ex-president pressed against them.

“The gravamen of [Trump’s] claims concerns alleged events occurring in 2016 and 2017, so the statute of limitations on his claims expired long ago,” Clinton’s own lawyers wrote in an April 20 motion to dismiss the original complaint. That motion cites the Federal Rule of Civil Procedure that governs dismissals based on so-called “time-barred” claims.

Trump’s lawyers have long promised to “cure defects” in the original March 24 complaint and sought to do so via Tuesday’s amended complaint.

Generally, in federal court, the statute of limitations bars lawsuits that are filed either four or five years after the underlying events which gave rise to the case. However, there are exceptions in narrow circumstances. In some cases, lawsuits can move forward after the usual window of time has expired if the harms weren’t discovered by the plaintiff until later. Plaintiffs in such situations must file cases within two years of when their injuries manifest or are discovered.  There are other exceptions as well.

Trump’s lawyers asserted in the amended complaint that “suspension, tolling and/or extension of the applicable statute of limitations is warranted” in this case because Trump didn’t discover the true nature of the alleged ills until a 2019 report by the Office of the Inspector General:

Despite his exercise of reasonable diligence, Plaintiff was unable to discover his injury and/or the fact that it was caused by a RICO violation(s) until December 9, 2019, at the earliest, upon the release of the Office of the Inspector General’s report entitled Review of Four FISA Applications and Other Aspects of the FBI’s Crossfire Hurricane Investigations on December 9, 2019, which exposed, in part, the RICO Defendants’ role in defrauding the media and intentionally misleading the FBI into commencing the Crossfire Hurricane investigation.

Trump’s attorneys also alleged that many of the defendants “fraudulently concealed” their so-called RICO Enterprise and that the statute of limitations needed to be tolled — or paused — for that reason as well:

The RICO Defendants intentionally exploited attorney-client privilege as a means of obscuring their activities and rendering all of their communications confidential and privileged.

According to Elias, Fusion GPS was intentionally walled-off from the Clinton Campaign and the DNC for “legal reasons: If Fusion’s communications were with a lawyer, they could be considered privileged and kept confidential.”

To further conceal the existence of the Enterprise, the Clinton Campaign and the DNC funneled payments to Fusion GPS, through Perkins Coie, for the purpose of intentionally disguising the relationship between the RICO Defendants.

Elsewhere, the Trump legal team argued that the statute of limitations needed to be tolled because a collection of other federal matters functioned as legal obstacles to the instant civil lawsuit. Listed among the five allegedly applicable proceedings are the prosecutions of Kevin Clinesmith, Michael Sussmann, and Igor Danchenko. Also cited is the “[i]nvestigation of Special Counsel John Durham.”

In a motion to dismiss Trump’s original lawsuit, John Podesta, the chairman of Hillary Clinton’s 2016 presidential campaign, said Trump had been tweeting about the alleged “conspiracy” well before the 2019 report by the inspector general’s office:

On October 29, 2017, Plaintiff tweeted about the same conspiracy which he now alleges in the Complaint. Plaintiff’s own statements reveal that he was aware of the alleged conspiracy and injury more than four years ago, therefore, his claim is time-barred and should be dismissed.

In the amended complaint, Trump alleges that he “has been injured in his business and property as a direct and proximate result of” the allegations.

As a result of the foregoing, Plaintiff has been injured in his business and property and has incurred and will continue to incur, significant damages, losses, and deprivation of tangible and intangible property, including but not limited to loss of political and/or business reputation, loss of business opportunities, loss of competitive position, loss of business revenue, loss of goodwill, loss of trade secrets, and/or loss of contractual relations, and has suffered actual, compensatory, special, incidental, and consequential damages in addition to costs of defense and attorneys’ fees.

Among other things, the Plaintiff was forced to incur expenses in an amount to be determined at trial, but known to be in excess of twenty-four million dollars ($24,000,000) and continuing to accrue, in the form of defense costs, legal fees, and related expenses incurred in connection with his effort to defend against the RICO Defendants’ actions and the various federal investigations and/or official proceedings which arose therefrom, in addition to the loss of existing and future business opportunities for himself, the Trump Campaign, and the Trump Organization LLC.

The number of counts in the original lawsuit remains the same; below is the list from the First Amended Complaint and the defendants against whom the individual counts are alleged.

The named defendants in the sprawling civil case are as follows: