Trump Files Massive Lawsuit Against Hillary Clinton, Putting His Theories of an ‘Unthinkable’ Racketeering ‘Plot’ Against Him to the Test 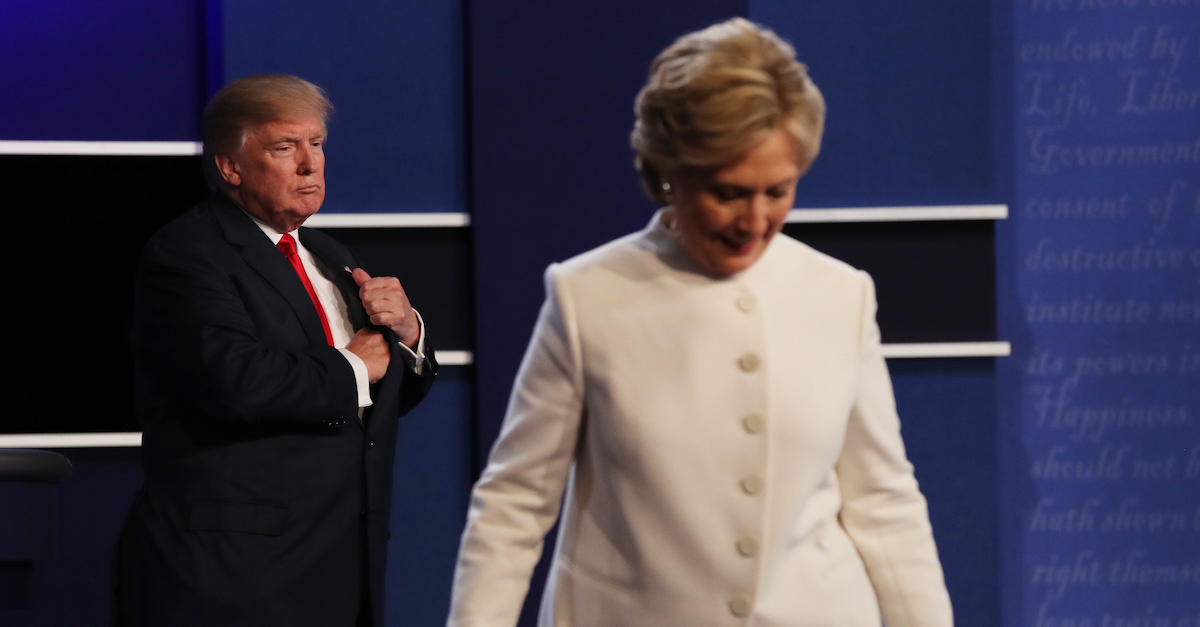 Donald Trump and Hillary Clinton debated one another on October 19, 2016 in Las Vegas, Nevada.

Former President Donald Trump on Thursday filed what might be best described as an archlawsuit of grievances against myriad actors associated with the Democratic Party, the FBI, and Russiagate.

“This isn’t a serious lawsuit,” tweeted former federal prosecutor and legal commentator Renato Mariotti, offering a prediction: “It won’t survive a motion to dismiss and is receiving far more attention than it deserves.”

The lawsuit was filed on Trump’s behalf by attorneys from the Ticktin Law Group in Deerfield Beach, Fla. Matthew Gertz, of the liberal/progressive media think tank Media Matters for America, immediately noted that the firm’s website was registered under the URL LegalBrains.com. That website has since been taken down from the web, but cached and archived versions of it exist. The lead attorney on the case, Peter Ticktin, wrote a book in support of Trump.

Ticktin was suspended from practicing law in 2009, according to a Florida Supreme Court case.

In that case, the state supreme court said Ticktin committed “egregious” and “serious violations” when he represented a client who the court said “was ultimately arrested and convicted of defrauding investors out of $20 million.” He is currently in good standing and has no record of discipline for the last 10 years, Florida bar records show.

Another one of the Trump attorneys on the case, Alina Habba, once complained that Facebook deactivated the account of Siggy Flicker after the Trump-supporting former star on the reality television series Real Housewives of New Jersey wished Melania Trump a happy birthday. Habba also sued niece Mary L. Trump on behalf of Donald Trump and has been associated with Trump’s case involving E. Jean Carroll. Habba has also threatened to sue the Pulitzer Prize Board unless it retracted awards for Russiagate reporting bestowed upon the New York Times the Washington Post.

The Thursday lawsuit alleges the following 16 counts, but not all counts are alleged against all defendants. Here is a list of the claims and a sampling of some of the named defendants:

RICO is the legal acronym for Racketeer Influenced and Corrupt Organizations. A relevant federal statute provides a civil cause of action against such organizations.  The statute explicitly states that an aggrieved party can in some cases recover treble damages if his business or property is harmed — that is, if he prevails in court.  The relevant section of the statute reads:

(c) Any person injured in his business or property by reason of a violation of section 1962 of this chapter may sue therefor in any appropriate United States district court and shall recover threefold the damages he sustains and the cost of the suit, including a reasonable attorney’s fee, except that no person may rely upon any conduct that would have been actionable as fraud in the purchase or sale of securities to establish a violation of section 1962. The exception contained in the preceding sentence does not apply to an action against any person that is criminally convicted in connection with the fraud, in which case the statute of limitations shall start to run on the date on which the conviction becomes final.

Notably, the Trump lawsuit does not directly allege defamation — though it does (in an introductory missive only) accuse the Clinton Campaign and the DNC of cooking up “a nefarious scheme to discredit, delegitimize and defame” Trump.

The complaint alleges that Trump lost “in excess of twenty-four million dollars ($24,000,000)” due to the alleged acts of the various defendants and deserves compensation “for damages, including Punitive damages, costs, and such further and other relief as [the] Court may deem just and proper.”

In the run-up to the 2016 Presidential Election, Hillary Clinton and her cohorts orchestrated an unthinkable plot – one that shocks the conscience and is an affront to this nation’s democracy. Acting in concert, the Defendants maliciously conspired to weave a false narrative that their Republican opponent, Donald J. Trump, was colluding with a hostile foreign sovereignty. The actions taken in furtherance of their scheme — falsifying evidence, deceiving law enforcement, and exploiting access to highly-sensitive data sources — are so outrageous, subversive and incendiary that even the events of Watergate pale in comparison.

Under the guise of ‘opposition research,’ ‘data analytics,’ and other political stratagems, the Defendants nefariously sought to sway the public’s trust. They worked together with a single, self-serving purpose: to vilify Donald J. Trump. Indeed, their far-reaching conspiracy was designed to cripple Trump’s bid for presidency by fabricating a scandal that would be used to trigger an unfounded federal investigation and ignite a media frenzy.

The lawsuit goes on to allege that the so-called “Steele Dossier” has been “fully debunked” as having contained “misstatements, misrepresentations and, most of all, flat out lies.”

But the lawsuit itself contains several dubiously blurry assertions. After balking that “Trump and his campaign were forced to expend tens of millions of dollars in legal fees to defend against” the “contrived and unwarranted proceedings” which resulted from the probe by Special Counsel Robert Mueller into whether or nor Russian agents and operatives influenced the 2016 election, the lawsuit characterized Trump as having been “exonerate[d]” by Mueller’s findings.

“Justice would ultimately prevail,” the lawsuit alleges. “[F]ollowing a two-year investigation, Special Counsel Mueller went on to exonerate Donald J. Trump and his campaign with his finding that there was no evidence of collusion with Russia.”

The use of the word “exonerate” in the lawsuit is notable, because Mueller himself said that his report did “not exculpate” Trump of obstruction of justice. The lawsuit engaged in a grammatical sleight of hand by cleverly yet tenuously connecting the word “exonerate” to “evidence of collusion” — and the latter was not the extent of what Mueller has stated about his findings.

And, even then, Reuters legal journalist Jan Wolfe immediately noted that a “GOP-led Senate panel found Russia used Manafort and WikiLeaks to try to help Trump’s campaign.” Paul Manafort, of course, was Trump’s former campaign chair — and a man Trump pardoned shortly before he left office.

Trump’s lawsuit also heralded the nascent probe by special counsel John Durham into how the government investigated Trump. It reads [emphasis ours]:

The full extent of the Defendants’ wrongdoing has been steadily and gradually exposed by Special Counsel John Durham, who has been heading a DOJ investigation into the origins of the Trump-Russia conspiracy. To date, he has already issued indictments to Sussmann and Danchenko, among others, for proffering false statements to law enforcement officials. As outlined below, these ‘speaking’ indictments not only implicate many of the Defendants named herein but also provide a great deal of insight into the inner-workings of the Defendants’ conspiratorial enterprise. Based on recent developments and the overall direction of Durham’s investigation, it seems all but certain that additional indictments are forthcoming.

The latter contention is rank speculation at best.

The case was filed in the Southern District of Florida. The lawsuit says that venue is proper “because at least one Defendant and the Plaintiff reside” there and “part of the events or omissions giving rise to the Plaintiffs’ claims occurred in this District.”

As to the claims that Clinton was behind it all, the lawsuit alleges as follows:

Clinton, acting as a principal, used the law firm, Perkins Coie, and the Clinton Campaign as her agents to act on her behalf to carry out the plot against Trump to assure that he would be falsely implicated as colluding with a hostile foreign sovereignty.

Specifically, the Clinton Campaign and the DNC under Clinton’s direction put into place a scheme to hire dishonest operatives to put together a collection of lies and innuendo about the Plaintiff and shop it to the FBI. The statements that were disseminated were knowingly false and damaging.

Clinton directed the DNC and the Clinton Campaign to also retain Perkins Coie, LLP to find proof of a sinister link between Trump and Russia in the lead-up to the 2016 Presidential Election.

The Clinton Campaign and the DNC, under the direction of Hillary Clinton, directed its law firm, Perkins Coie, to hire an outside intelligence firm, Fusion GPS to dig up dirt on the Plaintiff’s alleged connections with Russia in 2016. They paid Fusion GPS approximately $10 million to produce and propagate a false narrative that the Plaintiff had colluded with the Russians.

Clinton attempted to shield her involvement through a barricade of agents working on her behalf.

Once retained Perkins Coie, was tasked with spearheading the mission to find or fabricate proof of a sinister link between Trump and Russia in the lead-up to the 2016 Presidential Election.

Read the entire document below: