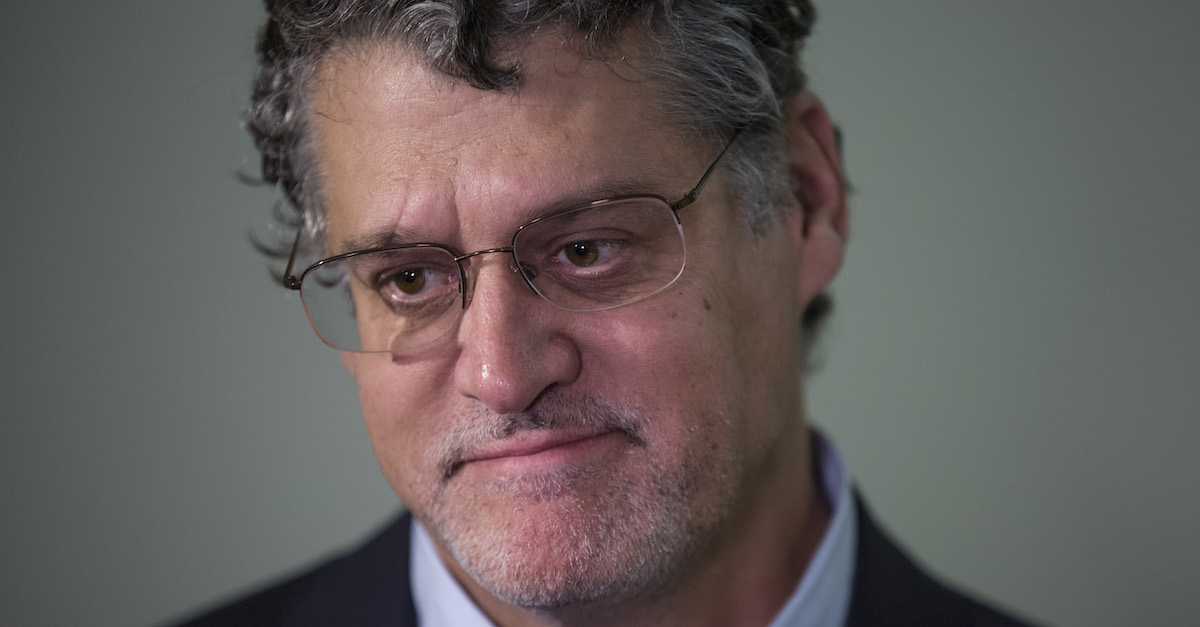 Fusion GPS Co-Founder Glenn Simpson listens as his lawyer, Joshua Levy, speaks to members of the media following a meeting with members of the House Judiciary and Oversight Committee in the Rayburn Office Building on Capitol Hill on Oct. 16, 2018 in Washington, DC.

The private intelligence firm vilified by Donald Trump for the creation of the discredited “Steele dossier” sought to dismiss the former president’s sprawling racketeering lawsuit on Wednesday, calling it a “lengthy jumble of incorrect statements of fact.”

One of several dismissal motions filed on Wednesday comes from three of the defendants: Fusion GPS, its co-founder Glenn Simpson, and the company’s partner Peter Fritsch.

As they note early in their 20-page filings, judges must assume the allegations of a civil complaint to be true when faced with a motion to dismiss at this stage in the proceedings. Lawsuits can only be thrown out of the proverbial courthouse door if they fail to assert a claim that the law recognizes as valid — even if all the facts are correct.  Or, in the words of the Federal Rules of Civil Procedure, cases must be rubbished if they “fail[] to state a claim upon which relief can be granted.”  Put another way, cases must scuttled if the law doesn’t care one way or another about the facts presented.

Either way, that did not stop Fusion GPS from taking shots at the plausibility of the claims.

Trump’s RICO lawsuit includes Fusion GPS’s name nearly 70 times, but those appearances largely relate to a handful of meetings. According to the complaint, Simpson and Fritsch met with the Democratic Party’s lawyer Marc Elias in April 2016 in a conclave arranged by a “senior official” in the party. Elias and his then-firm Perkins Coie, another defendant in the case, then allegedly retained Fusion GPS to conduct “opposition research” against Trump.

This became known as the “Steele dossier,” described in the complaint as “malicious aspersions” against Trump that Fusion GPS supposedly disseminated to federal law enforcement and the press to discredit him.

Disputing the allegations, Fusion GPS argues that even if credited, they would not amount to a racketeering conspiracy. And if they did, the four-year statute of limitations on such a claim already would have expired.

“As demonstrated in Defendant Clinton’s brief, Trump sent four tweets on October 29, 2017 describing the same conspiracy he now alleges in the Complaint,” the brief notes. “As early as January 2017 he had suggested that the ‘dossier’ was ‘A COMPLETE FRAUD’ consisting of ‘phony allegations . . . put together by my political opponents.'”

Turning Trump’s tweets against him, Fusion GPS cites them as evidence that the former president was on notice of his supposed claims more than four years ago — a fact legally fatal to his RICO suit.

“The facts alleged in the Complaint are all over four years old,” the memo states. “The Complaint describes no publications, statements, or even activity by the Fusion Defendants later than early 2017 in anything more than conclusory fashion.”