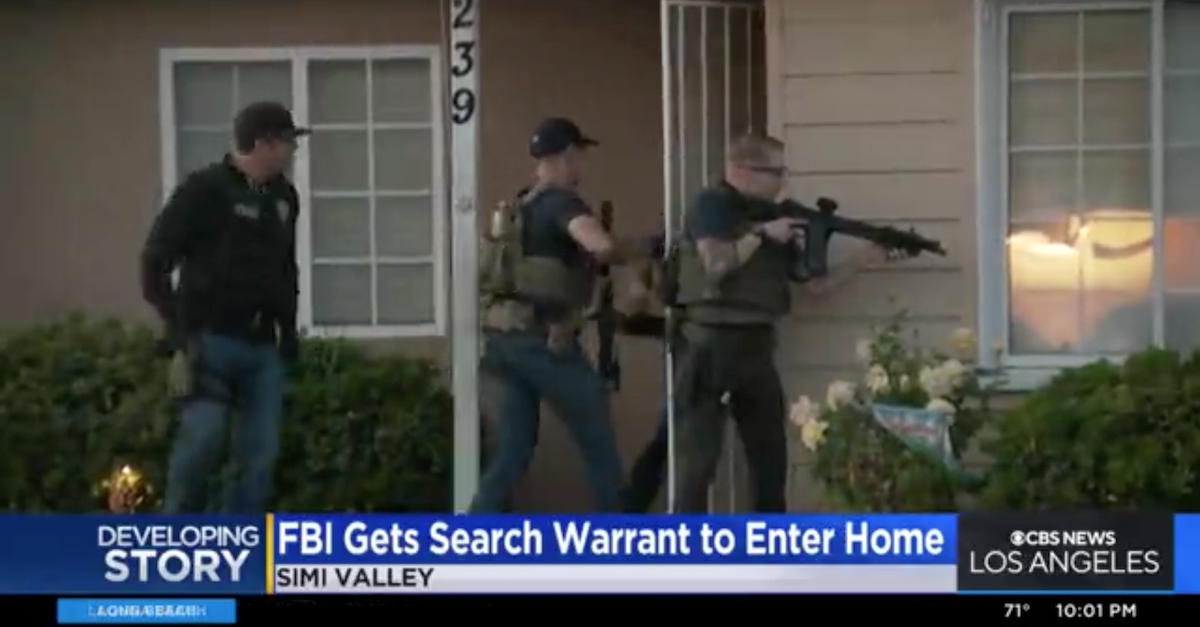 An FBI raid on the home of Nicholas John Roske was caught on camera by KCBS-TV.

The grandfather of the California man who allegedly wanted to murder Justice Brett Kavanaugh agreed that the accusations are “out of character” for the suspect.

Nicholas John Roske, 26, of Simi Valley is charged with attempting or threatening to murder a U.S. Supreme Court justice. The specific crime alleged is a violation of 18 U.S.C. § 115(a)(1)(A).

The feds say Roske traveled from California to Maryland, where Kavanaugh lives, bringing tactical gear, tools, a pistol, two magazines of ammunition, a knife, pepper spray, and zip ties along with him. He allegedly called 911 and reported that he was suicidal near Kavanaugh’s home. When he was arrested, he allegedly admitted he was plotting to kill Kavanaugh because he was upset about a recently leaked U.S. Supreme Court opinion that could end a federal constitutional right to abortion. He also allegedly said he was upset about the recent Uvalde, Texas school shooting.

Los Angeles CBS affiliate KCBS reported that the FBI burst into Roske’s home on Wednesday to search for evidence.  The television station’s cameras were recording as agents knocked, announced, and then busted in through the front door around 8:30 p.m. on Wednesday.

“When you hear that he’s potentially, you know, threatened a Supreme Court justice enough to be arrested, what — is that out of character for him?” a reporter asked.

“Excuse me,” Shannon said while truncating the brief exchange. “I gotta go back in.”

As Law&Crime reported on Wednesday, Roske allegedly said attacking Kavanaugh would “give his life a purpose.”

Simi Valley Police Department Cmdr. Ritchie Lew told the New York Post that Roske had no prior record with the police in his hometown but for what the paper called “a minor traffic infraction in 2015.”

The Simi Valley Unified School District told the newspaper that Roske graduated in 2014 and had been a cross-country runner for two years.

Friends and relatives have expressed shock at the arrest and described the family as quiet.

U.S. Magistrate Judge Timothy J. Sullivan, sitting in the District of Maryland where the defendant is charged, signed an order Wednesday which by the agreement of the parties will keep the defendant in jail for the time being.

Roske told Sullivan that he had a “reasonable understanding” of the case against him.

“But I wouldn’t say I’m thinking clearly,” the defendant reportedly responded when asked by the judge to describe his mental state.

He then clarified that he had a “clear enough understanding” of what was going on, The Washington Post said.

Roske also reportedly said he was taking medication; it was unclear what that medication might be.

The case is scheduled for a preliminary hearing on June 22.