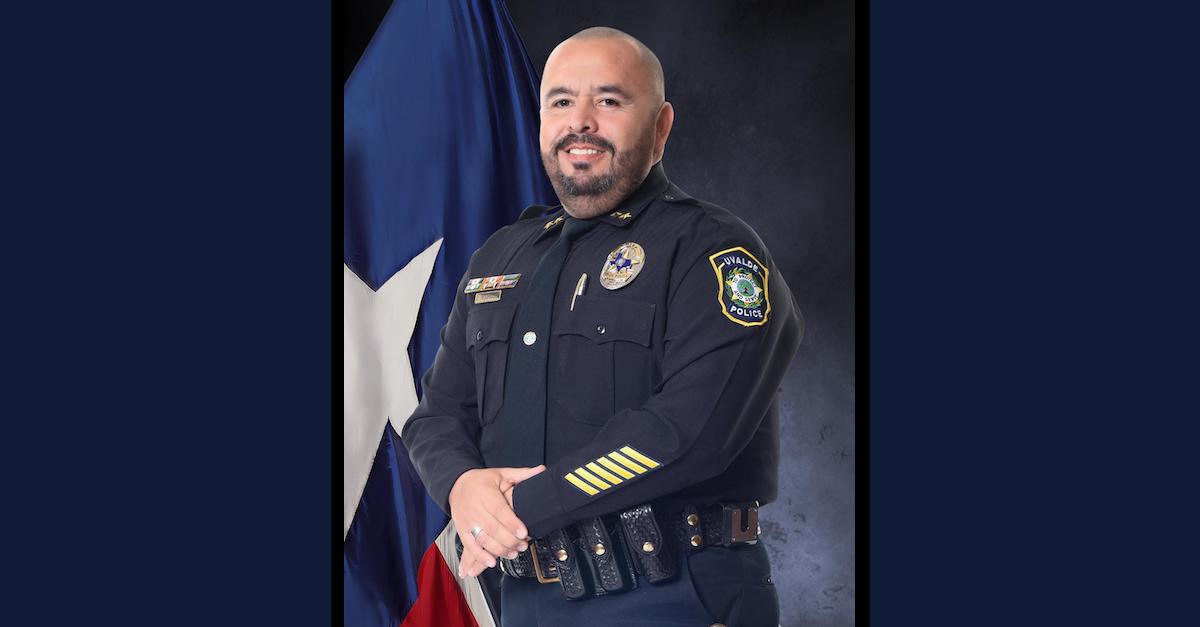 The chief of the Uvalde, Texas, Police Department on Thursday issued a press release which expressed thanks that his “officers did not sustain any life threatening injuries” during the massacre killings of 19 students and two adults at an elementary school this week.

Chief Daniel Rodriguez’s statement noted that several responding officers were shot in the massacre but survived. It also praised officers for having “responded within minutes” to the attack.

The full extent of the local municipal police department’s involvement in the response to the shooting and the role Rodriguez may (or may not) have played in managing that response remain largely unclear.  However, the timing of the Uvalde police chief’s statement is noteworthy in hindsight.  The press release was dated May 26, 2022 and timestamped on Facebook at 12:53 p.m. Texas time.  It appears to have come minutes before a planned 1:00 p.m. press conference where Victor Escalon, a regional director with the South Texas Department of Public Safety, struggled to explain why it took the police about an hour to kill the gunman.  It came one day before a lengthier news conference by Texas Department of Public Safety Director Steven McCraw about the collective law enforcement response that by many accounts could have been more urgent and forceful in its most critical stages. 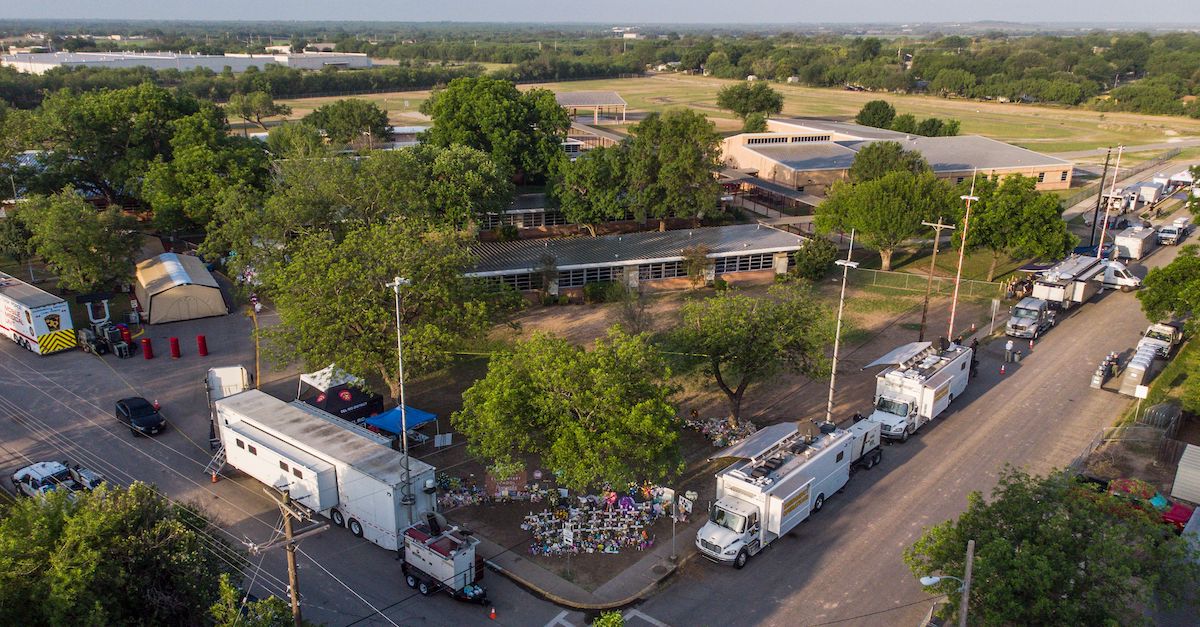 This aerial view shows Robb Elementary School and a makeshift memorial for shooting victims in Uvalde, Texas, on May 28, 2022. (Photo by Chandan Khanna/AFP via Getty Images.)

McCraw said Friday that the incident commander assumed the pupils inside the school “were no longer at risk” even though the classroom had not been breached by law enforcement.  It turned out, according to NBC News, that students were actually inside the classroom dying.  At least one phoned 911 multiple and begged to be rescued.  That caller didn’t survive, NBC News reported this week.

At 12.03 p.m., a girl called 911 for a little over a minute and whispered that she was in Room 112, according to Texas Department of Public Safety Director Steven C. McCraw. She called back at 12:10 p.m. reporting multiple people dead, he said, and again a few minutes later, to say there were still a number of students alive.

“Please send the police now,” the girl begged the dispatcher at 12:43 p.m., 40 minutes after her first call.

McCraw admitted that the decision not to mount a swift rescue was “the wrong decision” based on a heat-of-the-moment call by an “on-scene commander.”  Whoever that commander was apparently believed that the incident involved a “barricaded subject situation,” not an active shooter, and that “there were no more children at risk,” McCraw said.  Rather, McCraw explained, the “thought process at that particular point in time” was that “there was time to retrieve the keys and wait for a tactical team with the equipment to go ahead and breach the door and take on the subject.”

“Hey, from the benefit of hindsight, where I’m sitting now, that — of course — it was not the right decision, it was the wrong decision,” McCraw continued.  “Very — there’s no excuse for that.” 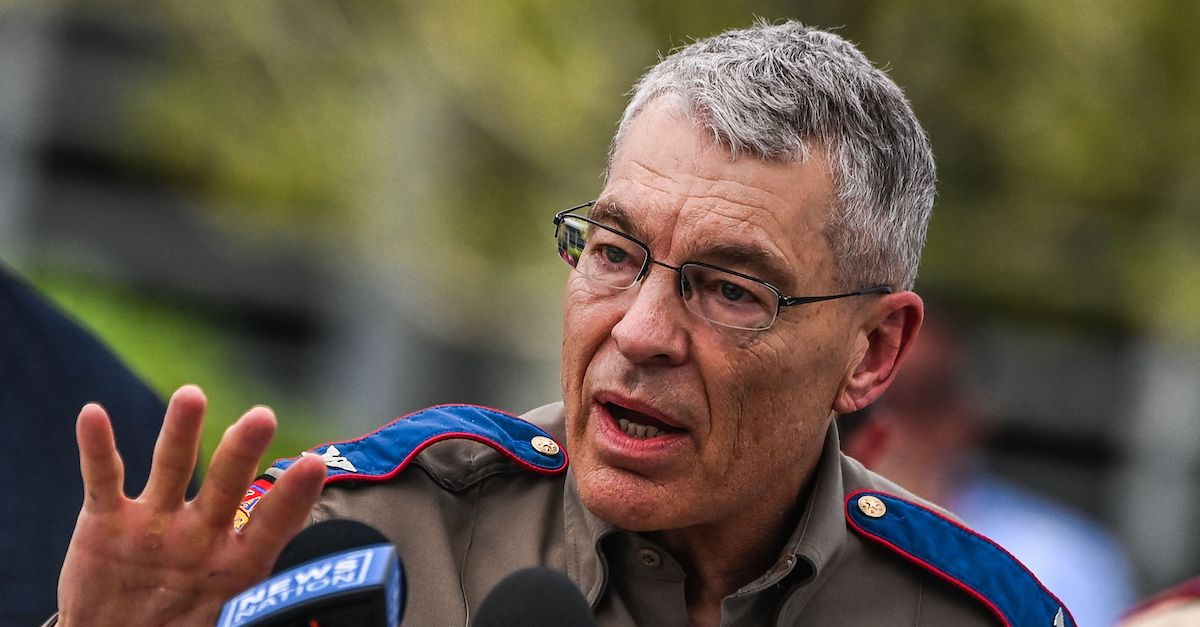 Director and Colonel of the Texas Department of Public Safety Steven C. McCraw speaks during a press conference outside Robb Elementary School in Uvalde, Texas, on May 27, 2022. (Photo by Chandan Khanna/AFP via Getty Images.)

Gunman Salvador Ramos shot his grandmother, fled, and crashed his truck at 11:28 a.m., the Associated Press wrote after compiling the most recent law enforcement timeline. Ramos entered Robb Elementary School at 11:33 a.m. and wasn’t dead until around 12:58 p.m. by AP estimates. Federal officers reportedly breached the room where the shooter was holed up after local authorities failed to do so.  Though some reports say some local forces tried to tell the feds to hold back, an unnamed source told the New York Post that Uvalde Schools Police Chief Peter Arredondo did not issue any such order.  (In Texas, school districts are allowed to have their own police forces, which are separate from city, county, and state forces.)  The Post’s source said it was unclear whether the 911 calls being placed by the children were being relayed to the officers on the ground and that it was unclear whether Arredondo had a radio at the scene.  The source also said there was “much confusion” about precisely who was doing what at the scene and that the details have not yet been sorted out.

Regardless of those particulars, the timeline proffered by law enforcement — which includes the hour-long delay — has not yet been disputed.  Conservative FOX opinion host Tucker Carlson called the police response to the incident “B.S.”  Texas Gov. Greg Abbott, a Republican who initially praised the police for allegedly rushing toward danger, later said he was “livid” over being “misled” about what he now believes really happened.

Chief Rodriguez’s press release is one of several law enforcement comments that have been roundly skewered by the loud chorus of commentators and detractors.  On Thursday, Escalon bemoaned before a bank of television cameras that he, as a “father,” was not able to “go home tonight and hug my kids” due to his work on the case.  Texas Department of Public Safety Lt. Chris Olivarez bluntly told CNN on Thursday that officers didn’t breach the classroom because “they could have been shot” — a true yet harrowing assessment that acknowledges the longstanding legal rule that the police generally have no duty to rescue private individuals.

My department and I will never be able to express in words the deepest sympathy and condolences to the individual families and the entire community of Uvalde. We extend our most sincere gratitude for the enormous outpour of support from all Law Enforcement Agencies, our community members and the nation. I want to thank all the personnel of my department for their dedicated and tireless efforts to continue to provide service to our community during this difficult time. Our personnel have displayed the utmost commitment to our community during this difficult time as we all are suffering as members of the community, that is the family of Uvalde.

It is important for our community to know that our Officers responded within minutes alongside Uvalde CISD Officers. Responding UPD Officers sustained gun-shot wounds from the suspect. Our entire department is thankful that the officers did not sustain any life threatening injuries. This is an ongoing investigation that is led by the Texas Rangers. I understand questions are surfacing regarding the details of what occurred. I know answers will not come fast enough during this trying time, but rest assured that with the completion of the full investigation, I will be able to answer all the questions that we can. I know words will never ease the pain that we are all suffering, but I hope you will join me in taking some solace in knowing that the pain comes from the fact that we all have such deep love for all the victims who have been taken from us, those who are recovering, and those who only time and love will continue to heal. As the close-knit community that we are, I know we will come together and help each other heal as the family that is #UvaldeStrong.

School officials — including a spokesperson who has preceded comments by Arredondo at at least two press conferences — have repeatedly told reporters not to ask questions of the assembled district authorities because no one would answer them.  All that has been forthcoming are terse statements. 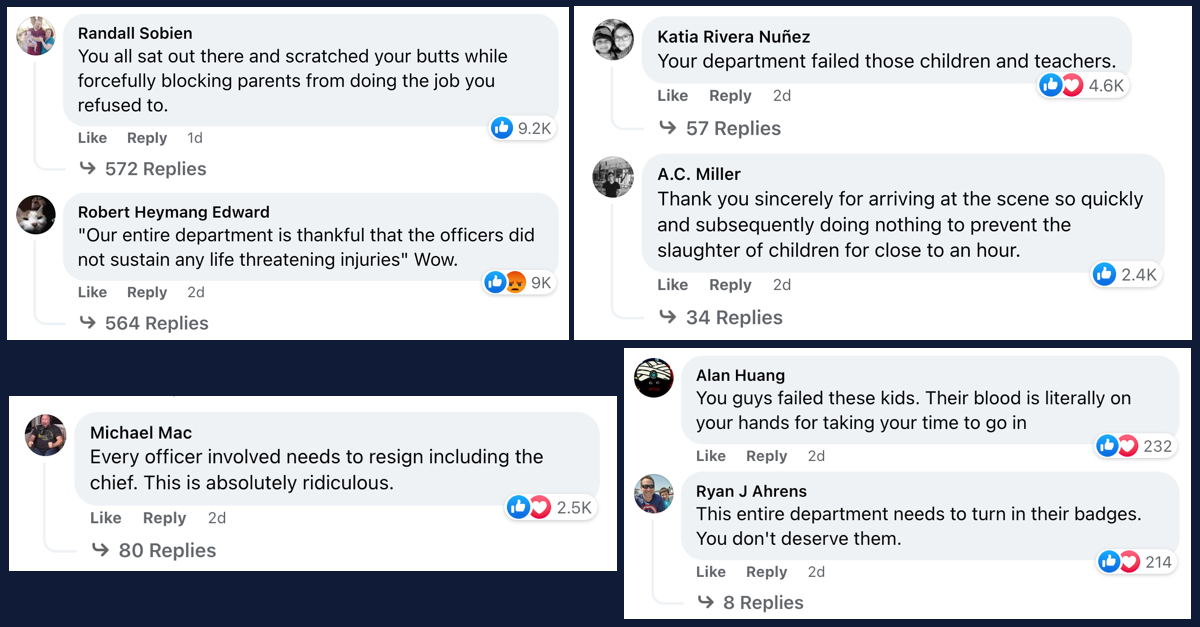 A press release posted to Facebook by the Uvalde Police Chief on Thursday elicited strong reactions. While some of the comments praised the law enforcement response or offered prayers for the responding officers, the missive was mostly ratioed by comments like these.

When asked why Rodriguez wasn’t at a Friday press conference, McCraw, of the state DPS, responded only by saying that reporters were “certainly welcome to reach out” separately to the local constabulary.  The New York Times, while reporting about the anger felt by many local parents toward the police response, said neither Arredondo nor Rodriguez responded to requests to talk.

The Rodriguez press release, which was originally posted on Facebook, is embedded below.