‘He Walked in Unobstructed’: Texas Department of Public Safety Struggles to Explain Why Cops Killed School Gunman ‘Approximately an Hour’ After Shooting Started 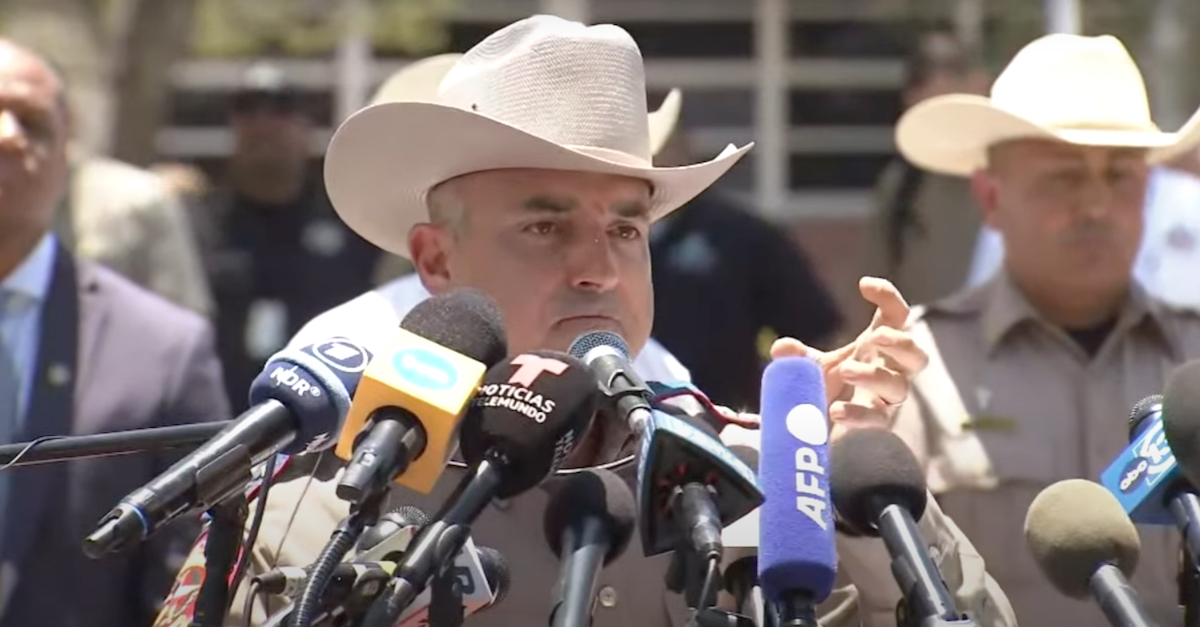 A regional director with the Texas Department of Public Safety on Thursday struggled to explain why it took officers an hour to kill a school shooter during a massacre this week in Uvalde, Texas, and at times contradicted the present law enforcement narrative about the disaster.

Victor Escalon remarked on the “traumatic” nature of the barbarism displayed, said everyone was “hurting inside,” and then said his personal life had been impacted by the tragedy. Two teachers and 19 children were killed.

Escalon repeatedly thanked those who were supporting law enforcement and said he wanted to “clear up” what he claimed really happened, but his explanation seemed to rile those assembled to hear him speak.

The law enforcement spokesman recapped how Salvador Ramos shot his grandmother in the face, took a vehicle, crashed it, and jumped out of the “passenger side” of that vehicle with a rifle and a bag of ammunition. Two witnesses at a funeral home across the street near the vehicle crash said Ramos shot at them, according to Escalon.

The vehicle wreck happened around 11:28 a.m., and police got a call about the crash at 11:30 a.m. The shooter then climbed a fence, entered a parking lot, and shot toward the school “multiple times.” He approached the school and entered at 11:40 a.m., Escalon said.

School police officers were inside, were fired upon, took cover, and then approached where the shooter was located, Escalon said. But later, when asked about the presence of a school officer on campus, he said “there was not an officer readily available armed.” The comments appeared to suggest that the officers who were inside the school were not armed.

Here’s how Escalon narrated the shooter’s movements and the initial response:

He walks . . . approximately 20 feet, 30 feet, he makes a right — he walks into the hallway, he makes a right, walks another 20 feet — turns left into a school room, a classroom, that has doors open in the middle.  Officers are there — the initial officers — they received gunfire.  They don’t make entry initially because of the gunfire they’re receiving, but we have officers calling for additional resources.  Everybody gets in the area.  Tactical teams.  We need equipment.  We need specialty equipment.  We need body armor.  We need precision riflemen.  Negotiators.  So, during this time that they’re making those calls to bring in help to solve this problem and stop it immediately, they’re also evacuating personnel — I’ll not say personnel, students, teachers — there’s a lot going.  A lot.  Complex situation.  They’re measuring.  Approximately an hour later, U.S. Border Patrol tactical teams arrive.  They make entry.  Shoot and kill the suspect.

Escalon also said a county deputy and a Uvalde police officer “made entry and killed the suspect.”

“Radio chatter at 12:58 p.m.” suggested the suspect was dead by that time, the AP said.

NBC News reported that the delay might have cost at least one child her life. The child lay in her classroom bleeding and playing dead while waiting to be rescued; she later died at the hospital.

“Jesus,” said MSNBC anchor Katy Tur after hearing that report from correspondent Kerry Sanders. Sanders referred to the delay as the “golden hour” that could have been the margin between life and death for many victims of traumatic yet not immediately lethal injuries. 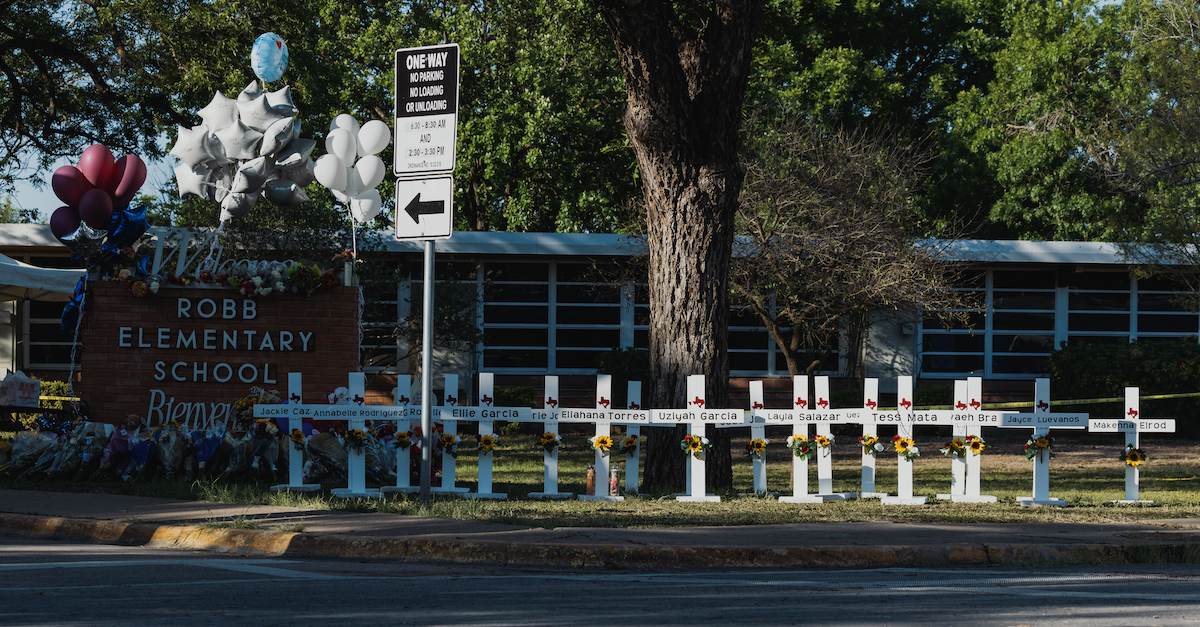 Crosses bearing the names of the victims of a mass shooting which killed 21 people, including 19 children, sit in front of Robb Elementary School on May 26, 2022 in Uvalde, Texas. (Photo by Jordan Vonderhaar/Getty Images.)

Escalon also said he “wanted to clear up” information that suggested a school district police officer “confronted” the killer. (In Texas, school districts are allowed to have their own police departments.)

A Forbes report lays out the initial assertions by the authorities about that alleged encounter:

The Texas director of public safety, Steve McCraw, said during a press conference a school security district officer “encountered” 18-year-old Salvador Ramos after hearing reports of the crashed vehicle, and did not exchange gunfire, though the state later confirmed to NBC the officer was armed.

“Not accurate,” Escalon said of that initial yet official assertion. “He walked in unobstructed initially . . . he was not confronted by anybody. To clear the record on that, four minutes later, law enforcement is coming to solve this problem.”

The positions expressed by the authorities may not be mutually exclusive: an “encounter” does not necessarily include a “confrontation.” But the precise details remained unclear as to precisely who was present and what they did when Ramos entered the school.

Still, the Associated Press noted that many of Escalon’s answers were “contrary” to previous assertions about the facts of the case.

Escalon also said that it “appears” the door to the classroom where the massacre happened was unlocked.

“The majority of the gunfire was in the beginning,” the DPS leader said.

Escalon suggested that subsequent gunfire appeared to be aimed at the officers who were attempting to negotiate a surrender and hold the shooter at bay. (NBC’s Kerry Sanders said from the scene the word “negotiation” was a loose interpretation of the word because the shooter offered no response.)

He also said the state was waiting to interview many of the officers who responded first and to piece together the available videos.

“Our job is to report the facts,” he repeatedly asserted. But later, he swatted down questions about what happened during the hour-long wait by saying the investigation simply wasn’t complete.  e didn’t directly respond to questions about whether officers took too long to confront the suspect while a tactical team was called or about whether the timing of the response was appropriate.

When asked by a reporter whether parents were asking officers to give them their armor so they could themselves enter the school, Escalon said DPS has not yet “verified” the full extent of that information.

The Associated Press reported that parents demanded that the police rush into the school when gunfire could be heard during the agonizing aforementioned hour.  From the AP:

Javier Cazares, whose fourth grade daughter, Jacklyn Cazares, was killed in the attack, said he raced to the school when he heard about the shooting, arriving while police were still gathered outside the building.

Upset that police were not moving in, he raised the idea of charging into the school with several other bystanders.

“Let’s just rush in because the cops aren’t doing anything like they are supposed to,” he said. “More could have been done.”

“They were unprepared,” he added.

Minutes earlier, Carranza had watched as Salvador Ramos crashed his truck into a ditch outside the school, grabbed his AR-15-style semi-automatic rifle and shot at two people outside a nearby funeral home who ran away uninjured.

Other parents were reportedly handcuffed and pepper sprayed while demanding action from the assembled constabulary outside the school as the shooting was ongoing.

“We’re still grabbing a lot of information,” he said.

“Why don’t we clear all of this up now?” asked one reporter who implored for specifics about the timeline.  “We’ve been given a lot of bad information.”

“We will circle back with you; want to answer all your questions” was the forthcoming response.  “Give us time.”