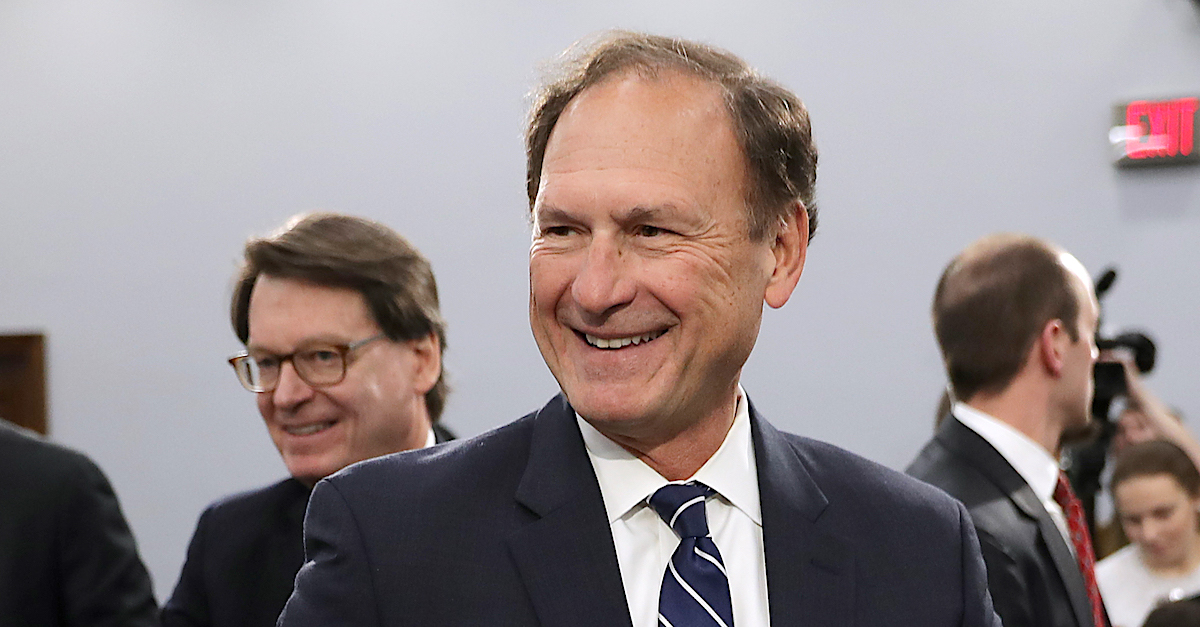 Update, Tuesday, May 3: Chief Justice Roberts confirmed the authenticity of the document.

The First Draft Majority Opinion attributed to Alito shows the justice writing that “Roe was egregiously wrong from the start.”

Images of the photocopied draft opinion can be seen in the tweet below:

The DRAFT (I’m going to keep using ALL CAPS) opinion was clearly photocopied the old-fashioned way and handed off in hard copy. The pdf is not searchable, and it has a slight tilt—suggestive of a rushed, nervous run through the Xerox machine. pic.twitter.com/nWWtwuNOCT

“[F]ar from bringing about a national settlement of the abortion issue,” says the opinion, “Roe and Casey have enflamed debate and deepened division.”

The case is Dobbs v. Jackson Women’s Health, a challenge to Mississippi’s restrictive abortion law that prohibits all abortions after 15 weeks of pregnancy in direct contravention of standards set down by the nation’s high court in Planned Parenthood v. Casey.

The 68-page draft majority opinion rails against the concept of any legal right to abortion. It reasoned that despite “the Constitution mak[ing] no mention of abortion,” and that “American law or the common law had never recognized such a right,” Roe created a framework that seemed more like “a set of rules much like that those would be found in a statute enacted by a statute legislature.”

As for the concept of stare decisis, Alito wrote that it “does not compel unending adherence to Roe’s abuse of judicial authority.”

Despite the unprecedented nature of a leak regarding a case of such sweeping national importance, the legal community appears united in believing the draft opinion to be a true representation of what is to come from the high court.

A person familiar with the court’s deliberations said that four of the other Republican-appointed justices – Clarence Thomas, Neil Gorsuch, Brett Kavanaugh and Amy Coney Barrett – had voted with Alito in the conference held among the justices after hearing oral arguments in December, and that line-up remains unchanged as of this week.

Gerstein further says that Justices Stephen Breyer, Sonia Sotomayor, and Elena Kagan are working on a dissent, and that there is no word yet as to how Chief Justice John Roberts plans to vote.

Former Acting Solicitor General of the United States Neal Katyal tweeted that “[t]here are lots of signals the opinion is legit,” and pointed to the the length and depth of the opinion and its analysis.

There are lots of signals the opinion is legit. The length and depth of analysis, would be very hard to fake. It says it is written by Alito and definitely sounds like him. It’s 60+ pages long.

Law professor Rick Hasen also tweeted that he believed the leaked document to be an authentic Alito draft, noting that the language in the document “really SOUNDS like Alito,” and that he considers Josh Gerstein a respected source.

From what I’ve read so far this really SOUNDS like Alito. And I completely trust @joshgerstein as a straight shooter and he trusts this source. This is very likely a real first draft.

“This is an earthquake,” University of Texas law professor Steve Vladeck tweeted of the leak, and noted that it is significant not only for the legal future of reproductive freedom, but also “for the stunning breach of the Court’s norms of confidentiality.” Vladeck emphasized the unprecedented nature of the leak, adding, “And whatever you think of the leak, the former has *everything* to do with the latter.”

SCOTUSblog also characterized the leak as an “earthquake,” predicting that it will destroy trust among members of the Court. “This leak is the gravest, most unforgivable sin,” SCOTUSblog tweeted.

Former U.S. Attorney Harry Litman said in a tweet that “it’s impossible to overstate how stunning and gobsmacking the leak of the Alito draft in the abortion case is,” and called the publicly-shared draft, “Unprecented and that’s just for starters.”

This overused cliche is almost never accurate but here it is: it’s impossible to overstate how stunning and gobsmacking the leak of the Alito draft in the abortion case is. Unprecented and that’s just for starters.

The New Republic writer Matt Ford drew attention to context for a SCOTUS leak in a tweet referencing an interview with Ian Samuel, a former clerk of the late Justice Antonin Scalia.

For some context on what the possible internal fallout of this leak will look like, here’s what Scalia reportedly used to tell the clerks about confidentiality: https://t.co/X05oatmMg9 pic.twitter.com/ivpYMlcUDB

Samuel said that Scalia was clear about the obligation of complete confidentiality and told his clerks, “If I ever discover that you have betrayed the confidences of what goes on in these chambers, I will do everything in my power to ruin your career.”

Constitutional law professor Dan Epps also tweeted that the leak would likely give rise to a “serious inquisition at the Court as the Chief tries to figure out who leaked.”

My guess is there’s about to be a serious inquisition at the Court as the Chief tries to figure out who leaked.

Washington Examiner reporter Cami Mondeaux reported just minutes after the draft opinion was leaked that barricades are up around the Supreme Court building.

Right now: Barricades are up around the Supreme Court building, just minutes after reports from Politico were leaked indicating SCOTUS has voted to overturn Roe v. Wade. pic.twitter.com/LxR9rbs6TF

The draft decision contains a note that it was circulated among the justices on Feb. 10. Of course, no opinion of the Court becomes final until it is officially released. However, given the context and reports about the justices’ votes, legal experts appear to be united in the belief that something very close to Alito’s draft opinion will before too long be released in Dobbs v. Jackson Women’s Health.