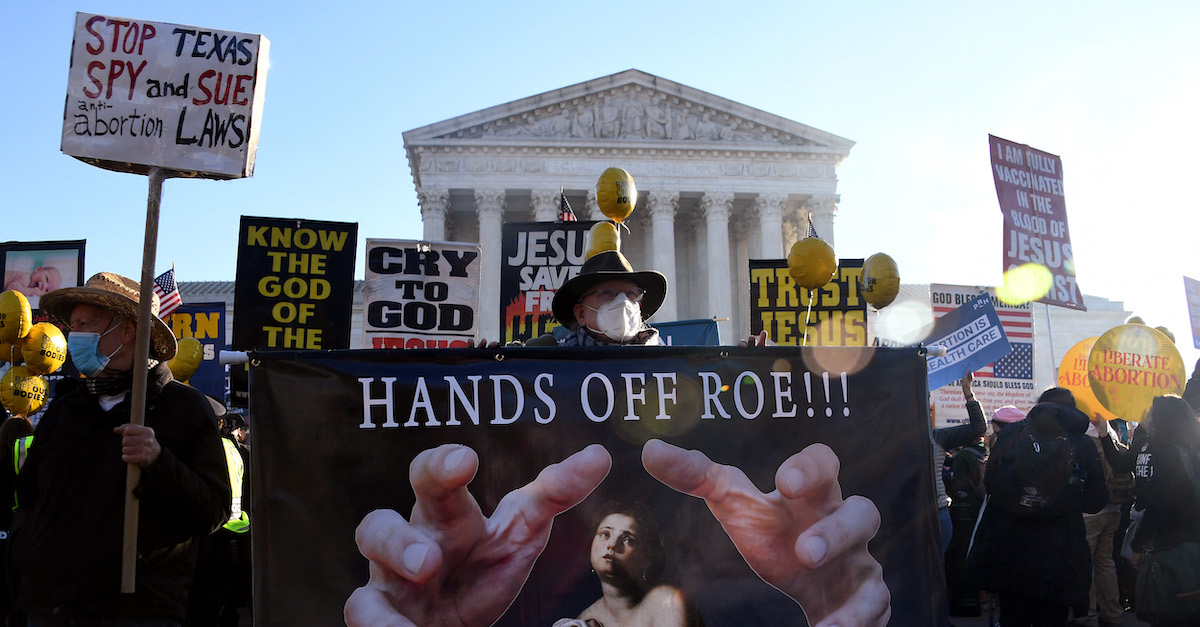 Protesters, demonstrators and activists gather in front of the U.S. Supreme Court on Dec. 1, 2021, as the justices hear arguments in Dobbs v. Jackson Women’s Health, a case about a Mississippi law that bans most abortions after 15 weeks. (Photo by Olivier Douliery/AFP via Getty Images.)

The Supreme Court of the United States heard oral arguments Wednesday in a case seeking to overturn lower court rulings against Mississippi’s restrictive abortion law. The case, Dobbs v. Jackson Women’s Health Organization, examines whether Mississippi’s law, which bans most abortions after 15 weeks of pregnancy, conflicts with rules set out in Roe v. Wade and Planned Parenthood v. Casey. Mississippi’s solicitor general argued that those longstanding precedents should be overturned.

Under Roe and Casey, states can not constitutionally place an “undue burden” on a woman’s ability to choose an abortion prior to the time a pregnancy is sustainable outside the womb — the point of “viability.” Mississippi now argues that it’s time for SCOTUS to change those rules.

Attorney Julie K. Rikelman argued on behalf of the Jackson Women’s Health Organization. She asked the justices to uphold the lower courts’ rulings against the abortion ban.

Justice Clarence Thomas wasted no time in likening the legal issues surrounding abortion to those surrounding child abuse. Thomas raised the example of a case in which a woman was criminally convicted of child neglect for ingesting cocaine during her pregnancy. The case had been one occurring during the post-viability phase of pregnancy, but Thomas asked whether the state could have enforced the same law if the woman had used drugs pre-viability. Thomas pointedly asked whether his example might, like abortion, be considered an issue of “bodily autonomy.”

Rikelman responded that the state “may,” in some instances, have an interest in regulating conduct to protect “fetal life.” But she added that those “issues aren’t posed in this case.”

Rather than go willingly down Thomas’s rabbit hole, Rikelman pivoted by saying that such laws are dangerous because they discourage women from seeking prenatal care.

Furthermore, Rikelman reminded the court, the law has been clear for half a century that “the one thing states cannot do is take the decision completely away from the woman.” Until viability, Rikelman continued, “it is her decision to make, given the unique physical demands of pregnancy and the life-altering consequences of pregnancy and having a child.”

The advocate referenced data that indicates women have advanced in society due specifically to access to abortion.

Chief Justice John Roberts interjected, pressing Rikelman to defend the necessity of allowing abortions between the 15-week mark and viability. “People who need abortion after 15 weeks are often in the most challenging circumstances,” explained Rikelman, who offered up examples of individuals navigating a major life change or job loss, the young, the poor, and those on contraception who might not realize they are pregnant.  “If they are denied the ability to make this decision,” she warned, “they will suffer all of the consequences that the Court has talked about in the past.”

“The state has conceded that some women will not be able to obtain an abortion before 15 weeks,” Rikelman added. “Without viability, there will be no stopping point” for states which seek to ban abortions via their own formulas.

Roberts next raised the question of whether a 15-week ban (as contrasted with a post-viability ban) would be more appropriate set against the backdrop of international law. “When you get to the viability standard,” commented Roberts, “we share that with the People’s Republic of China and North Korea.”

“That is not correct,” responded Rikelman. “The majority of countries that permit legal access to abortion allow access right up until viability,” she continued, citing Canada, Great Britain and Europe as examples.

She noted that while some other countries have “nominal lines” which ban abortion prior to viability, those lines generally come with a large number of broad exceptions. An example of an exception, Rikelman said, involved a woman’s socioeconomic status. The exceptions tended to swallow any pre-viability ban in the countries which have enacted such measures, she said — therefore buttressing the concept of viability as the world standard for abortion rights.

Following up on Rikelman’s statements about the advancement of women in society, Justice Amy Coney Barrett, a mother of seven herself, asked Rikelman whether arguments should be focused more on the physical or the financial consequences of pregnancy.

“Are you saying,” Barrett asked, “that the right as you conceive of it is grounded primarily in the bearing of the child, the carrying of the pregnancy, and not so much looking forward to the consequences of professional opportunities, and work life and economic burdens?”

Rikelman answered that both physical autonomy and decision-making autonomy are important concerns.

Barrett also asked about the so-called “safe haven” laws of all 50 states. Those laws allow parents to give unwanted infants to statutorily defined authorities after giving birth — usually hospitals, fire departments, and sometimes police stations, though the specific institutions vary by state — without the fear of prosecution or other repercussions. The first of the laws, which are sometimes called “Baby Moses” laws, was passed in Texas in 1999. That’s seven years after Casey (1992) and two and a half decades after Roe (1972).

Barrett asked whether such laws have solved the “burdens of parenting” and the fears of “forced motherhood” referenced in Roe and Casey. The laws allowed parents to escape the financial and career costs of parenting while also preserving the life of the baby, Barrett noted; however, she admitted that a law which forced a woman to carry a child to term only to give it away “is, without question, an infringement on bodily autonomy” — which she then said was occurring in “another context, like vaccines.”

“It doesn’t seem to follow that pregnancy and then parenthood are part of the same burden,” Barrett said. “The choice, or focus,” Barrett suggested, is about “the state requiring a woman to go fifteen, sixteen weeks more and then terminate parental rights at the conclusion.”

“Why don’t you address the safe haven laws, and why don’t they matter?” Barrett queried.

Rikelman refused to accept Barrett’s call to punt the burdens of pregnancy and said the broader issue involving adoption has already been considered by the court twice in the past.

“Even if some of those laws are new since Casey, the idea that a woman could place a child up for adoption has, of course, been true since Roe, so it’s a consideration that the court already had before it when it decided those cases and adhered to the viability line,” Rikelman responded. “We don’t just focus on the burdens of parenting, and neither did Roe and Casey. Instead, pregnancy itself is unique; it imposes unique physical demands and risks on women and in fact has impact on all of their lives and their ability to care for other children, other family members, on their ability to work.”

Rikelman then called the risks of pregnancy “alarmingly high” in Mississippi. She said it is “75 times more dangerous to give birth in Mississippi than it is to have a pre-viability abortion, and those risks are disproportionately threatening the lives of women of color.”

Justice Neil Gorsuch brought the conversation back to the topic of stare decisis – whether the Supreme Court should be bound by past precedent. In her colloquy with Gorsuch, Rikelman pointed out that Mississippi conceded that the law at issue is a prohibition as opposed to a regulation. On that basis, she argued, it must be struck down under the case law.

Taking a cue from the State of Mississippi’s briefs, Gorsuch asked Rikelman to articulate whether the court could jettison the viability line in favor of a generalized undue burden standard. Rikelman started to argue about past precedent; Gorsuch accused her of “fighting the hypothetical.”

“Without viability, it would not be workable,” Rikelman answered. “It would ultimately, again, always come down to a claim that states can bar a certain category of people form exercising this right . . . and that’s not a workable standard.”

Rikelman basically suggested that expanding the undue burden standard while erasing the viability assessment, as the state suggested as a second option should the court refuse to fully overrule Roe and Casey, would create a wishy-washy, hard-to-pin-down framework within which states could effectively ban abortions earlier and earlier into a pregnancy and without any sense of constitutional cohesion.

Gorsuch said he appreciated the clarification.

Justice Samuel Alito argued that the point of viability is an “arbitrary” point at which to hinge legal standards.

“If a woman wants to be free of the burdens of pregnancy,” the justice commented, “that interest does not disappear the moment the viability line is crossed.”

He continued to argue that “the fetus has an interest in having a life” — one “that doesn’t change from the point before and after viability.”

Rikelman disagreed, calling the point of viability “a principled line.”

Chief Justice Roberts shifted the discussion back to an earlier topic by asking whether some decisions should give rise to a kind of “super stare decisis.”

“The more unpopular the decisions are,” Roberts suggested, “the firmer the court should be from not departing from prior precedent.”

Rikelman allowed that the present issue rests upon a “precedent on precedent,” or the cumulative effect of Roe and Casey.

Justice Stephen Breyer rhapsodized about the court’s function in a case as hotly contested as this one.

“We are an institution more than a court of appeals or a district court,” Breyer explained.

“That’s Hamilton’s point,” he continued. “No purse. No sword. Yet, we have to have public support.”

Breyer said, however, that the high court cannot look to “just what’s popular.”

“The problem with the super case like this,” Breyer warned, is that whichever group of people disagrees with the outcome will chalk the court’s decision up to political loyalties. “And that’s what kills us as an American institution.”

Justice Brett Kavanaugh said that the case asks the SCOTUS to “pick sides on the most contentious social debate in American life.” He asked whether the Court should be “scrupulously neutral” on the issue of abortion.

Rikelman said that those are the very arguments that the Court rejected in Casey and told Kavanaugh that what is at stake is women’s right to liberty.

“If they’re not able to make this decision, if states can take control of women’s bodies and force them to endure months of pregnancy and childbirth,” the attorney argued, “then they will never have equal status under the Constitution.”

Law&Crime covered the separate arguments of the State of Mississippi’s solicitor general here.