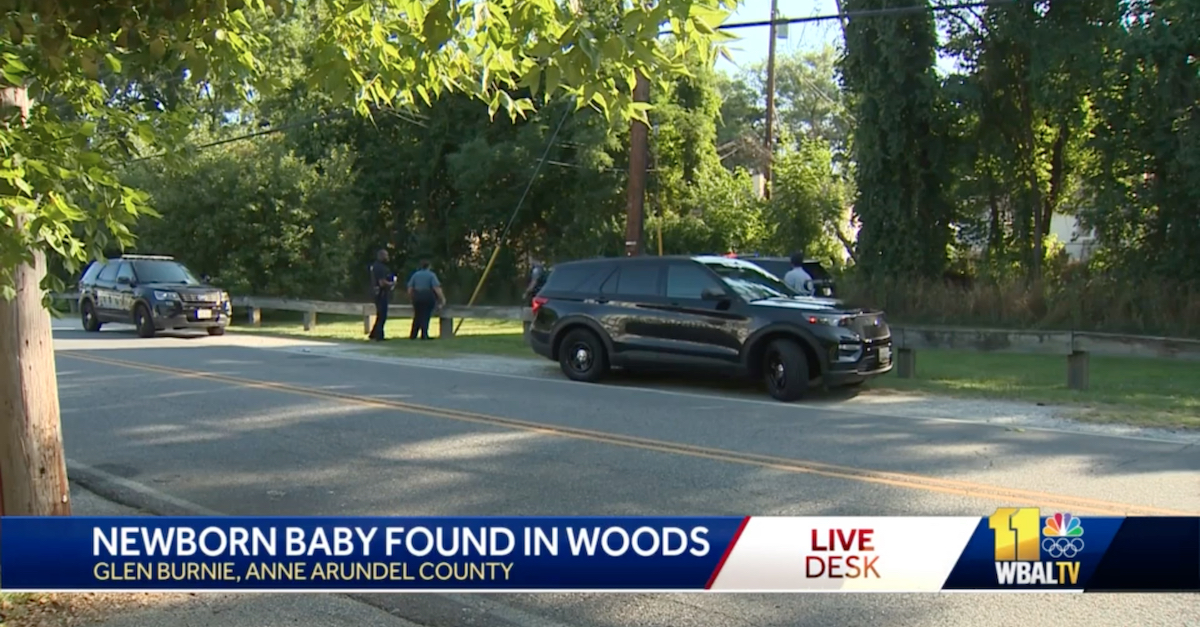 A teenage mother in Maryland faces a collection of counts after authorities say she abandoned her own newborn baby girl in a wooded area of Glen Burnie, a suburb of Baltimore.

The Anne Arundel County Department summarized what occurred in a pair of brief statements in mid-July.

On July 14, 2021 at approximately 6:15 a.m. officers responded for report of an abandoned newborn female infant found in a wooded area in the 600 block of Greenway Road in Glen Burnie. Several officers along with Anne Arundel County Fire Department Medic Unit responded. The newborn infant was transported to an area hospital for care.

Update (July 15, 2021): On July 14, 2021, as detectives were investigating this incident, the mother of the child was identified. She was provided medical treatment and access to our crisis intervention and other county resources. The infant is doing well and is healthy. This investigation is active and ongoing.

The precise location where the infant was left was on Greenway Road near Pine Terrace, according to a report from Baltimore NBC affiliate WBAL-TV.  It’s just yards away from the defendant’s address.

The Associated Press reported that the police were alerted to the matter when someone called 911 to report “the sound of a crying baby.” Officers arrived and “found an unclothed baby girl with an umbilical cord still attached,” according to the AP.

Marc Limansky, a spokesperson for the Anne Arundel County Police Department, said at a news conference that the child suffered from “some injuries due to being in contact with the brush, some bushes — scrapes, abrasions, and that sort of thing.”  But he added that “thankfully” the child was still alive.

WBAL said the person who discovered the infant was a passerby and that the infant had been abandoned near a bike trail which paralleled a residential street. That passerby, Ted Rutherford, said he and a second person who came upon the scene struggled at first to determine whether they were hearing a human baby or an animal.

“When I got up to here, it sounded like — I didn’t know if it was an animal whimpering,” Rutherford told WBAL.  “But then something told me, ‘That’s a baby crying.’ I turned around and there was a young boy walking the other way and he went up and confirmed it was a baby.”

“After we confirmed it was a baby, I walked out to the street because I didn’t have a cell phone on me,” Rutherford continued.  “Two people stopped but they wouldn’t — they didn’t want to get involved.  And then my my neighbor across the street here — he was coming out to water his flowers and I told him to call 911.”

“Thank God I walked this morning,” Rutherford added — saying that he initially wasn’t feeling well and almost didn’t go out.

Washington, D.C. FOX affiliate WTTG said that responding officers “carefully removed the infant and carried her to paramedics on scene.”

“Multiple items of evidence were collected at the scene of the abandonment,” WTTG continued.  “A canvass of the area was conducted in which valuable information was developed by citizens possibly identifying the mother of the newborn.”

The various reports indicate that the defendant was located, questioned, and charged; her identity as the baby girl’s mother was also confirmed.

Police said that the incident should never have come to this.

“The Anne Arundel County Police wants to stress to all that in Maryland, no one ever has to abandon a newborn baby,” police said in an additional statement obtained by WTOP radio in Washington, D.C. “Under the Safe Haven law, a distressed parent who is unable or unwilling to care for their infant can safely give up custody of their baby, no questions asked.”

“A person who invokes Safe Haven is immune from civil liability or criminal prosecution so long as the child is unharmed,” WTOP noted.

Washington, D.C. ABC affiliate WJLA-TV explained the specifics of Maryland’s law in additional detail.  The state also maintains a full Safe Haven website which lists facilities and addresses where unharmed newborns may be dropped off.

As Law&Crime has previously noted, all fifty states have similar so-called “Safe Haven” or “Baby Moses” laws on the books.

Jail records indicate that the defendant is incarcerated at the Jennifer Road Detention Center.  No bail is listed on either the jail records or the district court records.

No defense attorney is listed on the docket. The defendant is due in court again on Aug. 2 at 11:00 a.m.

[image via screengrab from WBAL-TV]