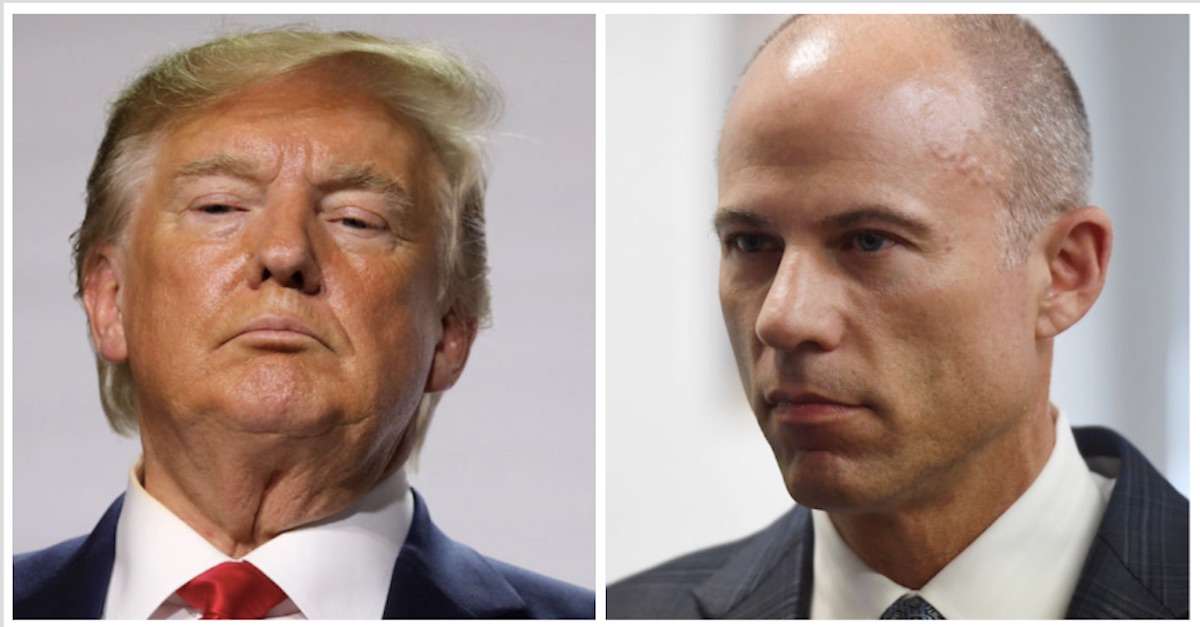 It sure was fun while it lasted. Avenatti will almost certainly lose his law license. Much of his alleged wrongdoing is directly connected to his work with clients. To underscore the point, he was arrested for an alleged violation of his bail conditions during his disciplinary hearing. But now that Avenatti is facing multiple federal criminal charges coast to coast, likely disbarment, and general disgrace, we’re left with the truth we knew all along: Avenatti and Trump are two sides of the same coin. We’ll leave the psychoanalysis to the experts, but we’re here to do a little legal side-by-side. The similarities are pretty staggering.

It should be noted: Avenatti has denied all allegations of wrongdoing and recently told Law&Crime that he expects to be fully exonerated.

1. Extortion: Under federal law, this is the offense of exchanging threats for value.

Avenatti allegedly threatened Nike: either the company agreed to pay Avenatti $25 million, or Avenatti would hold a press conference at a critical time for Nike’s financial health, and reveal all sorts of dirt on the company.

Trump too, has been accused of extortion. Of course, as a sitting president, Trump cannot be indicted, but the accusation and the impeachment is there just the same. The reality of extortion is that it sometimes looks like a threat, while other times, it looks like a promise. President Trump withholding and conditioning the release of nearly $400 million in military aid to Ukraine on an announcement of investigation into Joe Biden and family is precisely the kind of promise that could amount to extortion.

2. Wire Fraud: A person is guilty of wire fraud when they communicate their schemes to defraud.

According to one pending criminal complaint, Avenatti got over $4 million in loans from a Mississippi bank by submitting false tax returns.

Democrats, in their official report recommending that Trump be removed from office, alleged that in the infamously “perfect” phone call,  Trump “willfully set out to defraud the American people” by advancing the scheme over the phone and failing to provide “honest services” as president.

Avenatti has been charged with violation of several criminal tax laws. Among them are Attempts to interfere with administration of internal revenue laws, and Willful Failure to file returns, supply information. and pay tax. Prosecutors allege that Avenatti never filed returns for the three years prior to 2014, and owed the IRS $850,000 in back taxes.

Donald Trump has also been widely accused of pervasive tax-related wrongdoing, both before and after he was elected president. The accusations against Trump range from the general (that he has shirked an obligation to turn over his tax returns) to the specific (that he profited from the sale of real estate and failed to declare the income). Litigation seeking to mandate a release of Trump’s tax records is proceeding in parallel with the Trump impeachment.

The Supreme Court is expected to rule on the matter in the coming months.

4. Bank Fraud: These are crimes connected with obtaining money or credit from financial institutions by means of false pretenses or promises.

In addition to tax crimes connected to fraudulently obtaining loans, Avenatti also faces prosecution for bank fraud in California. Prosecutors say Avenatti was in financial ruin following a former law partner’s $4.85-million personal judgment against him after Avenatti’s firm failed to pay a debt, and received over $4 million in loans based on false documentation.

President Trump has been accused of similarly misrepresenting his personal assets in dealings with Deutsche Bank. Various reporters have produced detailed articles about Trump’s relationship with Deutsche Bank in which Trump exaggerated his wealth when attempting to get approved for loans.

Though not bank fraud, President Trump recently admitted to (and paid up for) misusing charitable funds for political gain. And then there’s Trump University.

5. False Testimony Under Oath: This offense makes it a crime to knowingly and fraudulently make a false oath or account in relation to any case under title 11 (bankruptcy proceedings).

Avenatti faces four counts of bankruptcy fraud for allegedly failing to report all of his firm’s accounts receivable, and falsely testifying under oath during a bankruptcy hearing by denying the firm had received more than $1.3 million in fees that it actually had received.

Certainly, there is no shortage of examples of demonstrably false statements put forth by Trump in a variety of contexts. Moreover, he has declared bankruptcy more than six times.

Some have suggested that Trump’s restructuring under bankruptcy laws, followed by continued operation of his casinos, could only be the result of his having provided false information during the bankruptcy process. Others have been even more specific, suggesting that Trump committed perjury during a deposition.

Trump’s former lawyer Michael Cohen testified before Congress that Trump knew Felix Sater, a convicted felon once connected to the Russian mafia. That testimony directly contradicted Trump’s testimony from a civil deposition, when he denied knowing or even being able to recognize Sater. We’ve seen similar denials of late from the president, claiming he does not know Lev Parnas. That has backfired.

There is also some speculation that the written answers submitted by Trump to former special counsel Robert Mueller may not have been truthful. Trump denied having ever discussed WikiLeaks with his since-convicted pal Roger Stone, but Mueller witness Rick Gates said he had first-hand knowledge of a Trump-Stone conversation about impending WikiLeaks disclosures.

6. Aggravated Identity Theft: This felony makes it an offense to knowingly transfer, possess, or use the identification of another person.

On this count, there’s no direct parallel to Donald Trump, but there are some honorable mentions.

Special counsel Robert Mueller relied on the same statute to bring charges of aggravated identity theft against five Russian nationals indicted for conspiracy to interfere in the 2016 U.S. election.

And, as we well know, Donald Trump appears to have regularly used pseudonyms throughout his life and career, some instances of which are detailed in a Fortune piece headlined, “Donald Trump’s Long, Strange History of Using Fake Names.” Who could forget that weird “John Barron” interview and “David Dennison“?

Editor’s note: a line has been added to note that Avenatti has said that he expects to be fully exonerated.