In Attempt to Fend Off DOJ Lawsuit, Texas Argues Patients Are ‘Stimulating’ Interstate Commerce by Fleeing to Other States for Abortions 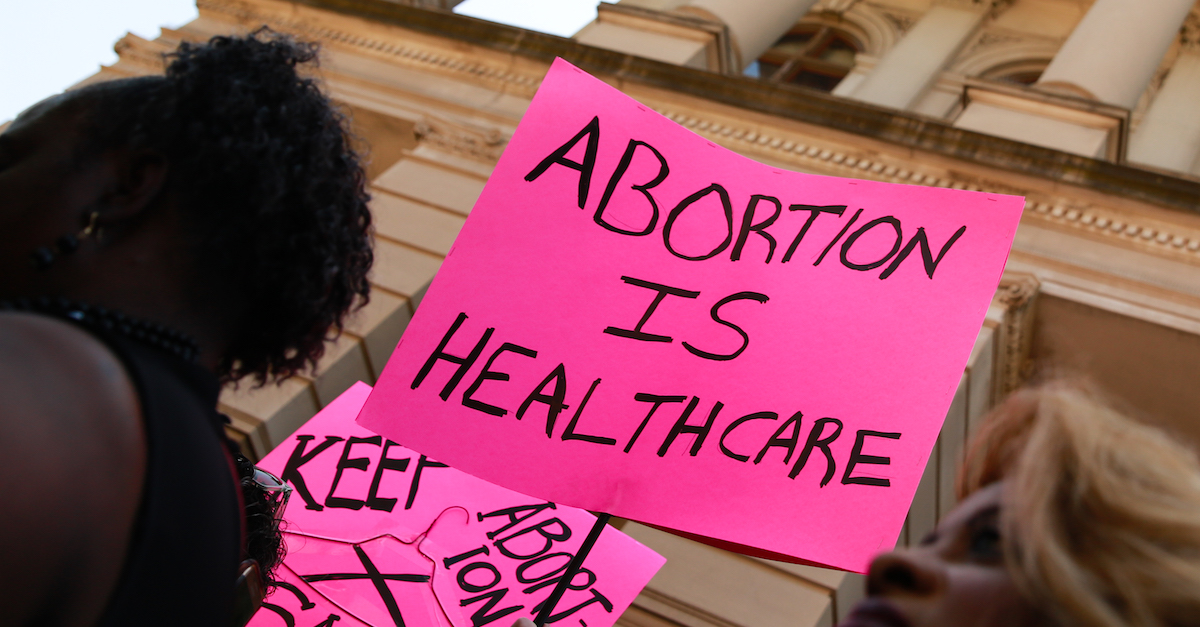 Women from hold signs during a protest against recently passed abortion bans at the Georgia State Capitol building on May 21, 2019 in Atlanta.

The State of Texas on Wednesday filed a scheduled motion to dismiss litigation by the U.S. Department of Justice over S.B. 8, the Lone Star State’s sweeping abortion law which financially discourages doctors from performing pregnancy-ending procedures when cardiac activity occurs after approximately six weeks of embryonic development.

The hotly debated law took effect after the Supreme Court of the United States refused emergency requests to block it. It allows private parties to sue abortion providers and others who assist patients in obtaining abortion procedures for at least $10,000 for each offense, but it does not directly place patients themselves in legal peril. There is no cap on the number of private individuals who may sue, so critics say any offending violation could rack up limitless dollar amounts in damages. Critics — including the DOJ — have argued that the law prevents federal courts from enjoining enforcement efforts which are generally meted out by government officials.

The DOJ sued on Sept. 9 on claims that S.B. 8 was passed in “open defiance of the Constitution” because it — at least in the DOJ’s view — bans pre-viability abortions in contravention of “settled constitutional law.” Viability is the point at which a fetus can live outside the womb.

The DOJ is asking for injunctions against two groups of individuals: (1) private parties who may use the law to sue abortion providers and others connected to aiding women in obtaining abortions, and (2) state courts that — in the words of the State of Texas — “might adjudicate those suits.”

The state articulated a two-pronged argument against the DOJ’s offensive. First, Texas said the federal government “lacks the power to sue . . . for the requested relief.” Second, Texas said S.B. 8 is constitutional as written.

Federal Power to Litigate Against States

“The Court should deny the federal government’s motion for a preliminary injunction and dismiss this case,” the state said in an introductory missive which kicked off the full 74-page argument. “Article III does not permit courts to hear ‘a proceeding against the government in its sovereign capacity’ when ‘the only judgment required is to settle the doubtful character of the legislation in question.'”

The state then said the Merrick Garland-led DOJ was powerless to argue the Biden administration’s cause without a specific grant of power from Congress:

The State of Texas also said that S.B. 8 — named the “Texas Heartbeat Act” — will not “evade judicial review.”

“The constitutionality of the Texas Heartbeat Act can be reviewed in the same way that virtually all of state tort law is: State-court defendants raise constitutional defenses before neutral judges sworn to follow the U.S. Constitution and, if necessary, appeal to the U.S. Supreme Court,” the state said.

On the merits, the State of Texas walked the district court through the myriad of provisions within S.B. 8 which are not contested:

Even the federal government does not challenge the constitutionality of many provisions in the Heartbeat Act. No one disputes the constitutionality of requiring doctors to determine “whether the woman’s unborn child has a detectable fetal heartbeat. Tex. Health & Safety Code § 171.203. No one disputes the constitutionality of the provision governing attorney’s fees. See Tex. Civ. Prac. & Rem. Code § 30.022. The federal government’s challenge is limited to the provision authorizing private causes of action, see Tex. Health & Safety Code § 171.208, but even that argument is limited to the statute’s pre-viability applications. The federal government raises no argument that Texas cannot authorize heartbeat suits for post- viability abortions. In any event, the Heartbeat Act cannot violate Supreme Court precedent because it incorporates the Court’s “undue burden” test as a defense.

The latter is a reference to a provision within S.B. 8 that reflects the legal requirement of Planned Parenthood v. Casey that the government cannot place an “undue burden” before a patient seeking an abortion. Texas says its law burdens doctors, not patients, and draws a distinct difference between the two.  Indeed, the state says S.B. 8 “sensibly” regulates abortions in full compliance with Casey.

“Texas has enacted a private cause of action to encourage, insofar as possible, that any abortions take place before a heartbeat is detectable,” the state says.  “Planned Parenthood Center for Choice, Inc., performed 52 abortions over 10 days after the Heartbeat Act took effect.”

“By its own terms, then, the Texas Heartbeat Act channels abortions to the pre-heartbeat time period, except when doing so would impose an undue burden,” the state continued.  “Shifting the time at which some abortions occur is not a ‘ban’ under Casey.”

In several places, the Lone Star State challenged the characterization of the law as a “ban.”

“Preventing some pre-viability abortions is not enough to turn a statute from a regulation into a ban,” the state said in one passage.

“That a law prevents some abortions from occurring, even pre-viability, does not make it a ‘ban,'” the state similarly said elsewhere.

In another section of the document, Texas seemed pleased that patients were traveling outside its boundaries to obtain abortion procedures:

Other pregnant women have received post-heartbeat abortions by traveling across state lines. According to the federal government, these options will increase over time as out-of-state abortions providers are “working hard to expand [their] capacity and increase the number of patients [they] can serve.”

Elsewhere, the state argued that it was a good thing that patients wishing to escape S.B. 8’s effects on abortion doctors were fleeing across state lines to Oklahoma and Kansas:

In this case, the federal government does not bring a commerce claim, nor does it cite any actual evidence that the Texas Heartbeat Act burdens interstate commerce. What evidence that does exist in the record suggests that, if anything, the Act is stimulating rather than obstructing interstate travel.

Texas also challenged the federal government’s argument that the state legislature “acted with the purpose of infringing women’s constitutional rights.”

“Proof of any unlawful motive must appear in the record,” the state countered, “yet the federal government cites no evidence of the Texas Legislature’s purpose.”

After spending considerable time and attention arguing that S.B. 8 could simply be declared unconstitutional by state court judges (in a costly plethora of civil proceedings), the state admitted that pro-choice advocates would have a difficult time so doing:

At bottom, the federal government’s complaint is that the Heartbeat Act is difficult to effectively enjoin. But there is no requirement that a state write its laws to make them easily enjoined under Section 1983 [of federal civil rights law]. Indeed, any state-created private cause of action would fall under that theory. The cases cited by the federal government confirm only that the States may not oust federal claims from their courts or place such restrictions on them that they cannot be heard. State courts are open to hear constitutional challenges and, if federal subject-matter jurisdiction can be found, so are federal courts.

Texas further argues that S.B. 8 does not interfere with federal programs and contracts.

Rather than sue in federal court, the state suggested that the federal government could intervene in state court proceedings if it wished to argue the constitutionality of S.B. 8. Additionally, at times, the state said the DOJ was being completely two-faced with its legal positions by arguing in favor of legal theories that insulate various governments from liability while here doing the opposite.

Taking a swipe at the regulatory state toward the end of its voluminous arguments, Texas suggested that the cornucopia of lawsuits which may result from the newfound antithesis of tort reform enshrined in S.B. 8 are actually a good thing:

This puts abortion providers in a better position than most regulated parties. Many regulatory laws allow executive officials to enforce them without any kind of pre-deprivation process. Under this law, however, a defendant has the benefit of judicial process before any penalty can be imposed.

At bottom, the federal government seems to be perturbed that judicial review of the Heartbeat Act will likely occur through state courts rather than federal courts. That is no cause for complaint. State courts are competent to decide federal constitutional questions, and they routinely do so.

The state then oddly cited the famous First Amendment case of New York Times v. Sullivan as support. In that case, the New York Times used a constitutional defense to invalidate a state defamation law after state-court-level proceedings.  But the logic of the state’s response was premised on the U.S. Supreme Court ultimately knocking down the state’s own regulatory scheme in support of broader press freedoms under the First Amendment — a move some conservative justices and some conservative litigators say was an error.

Editor’s note: some legal citations have been omitted from quotations to help make this piece easier to read. The full citations are contained within the embedded document.