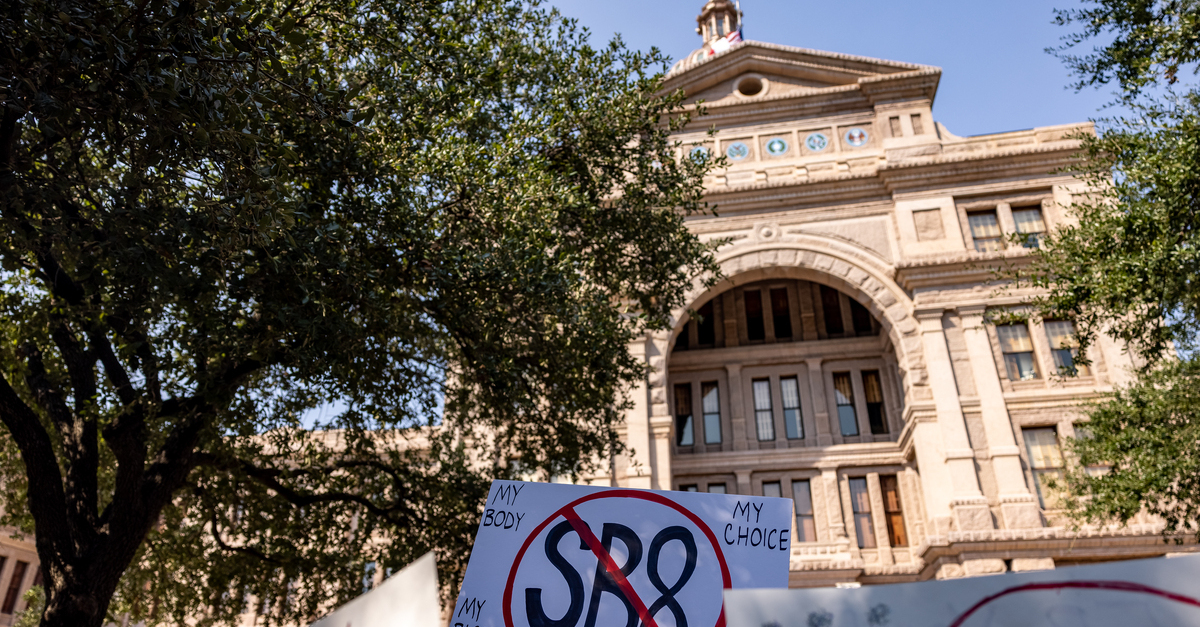 AUSTIN, TX – SEPTEMBER 11: Abortion rights activists rally at the Texas State Capitol on September 11, 2021 in Austin, Texas. Texas Lawmakers recently passed several pieces of conservative legislation, including SB8, which prohibits abortions in Texas after a fetal heartbeat is detected on an ultrasound, usually between the fifth and sixth weeks of pregnancy.

The first lawsuit has been fired against a doctor who performed an abortion in violation of Texas’s restrictive new anti-abortion law.

“Plaintiff brings this action pursuant to Texas Senate Bill 8, which became effective 9-1- 2021,” the brief filing begins. “The gravamen of this bill is a prohibition on any abortion after a fetal heartbeat is detectible, enforceable not by the state but by private citizens.”

Braid intentionally made himself a target and opened himself up to such litigation on Sept. 18 when the Washington Post published an opinion piece wherein the doctor confessed to violating the law.

In the piece, Braid noted that when he graduated from the University of Texas during the summer of 1972, “abortion was effectively illegal in Texas — unless a psychiatrist certified a woman was suicidal.”

The doctor went on to explain how things were back then:

If the woman had money, we’d refer her to clinics in Colorado, California or New York. The rest were on their own. Some traveled across the border to Mexico.

At the hospital that year, I saw three teenagers die from illegal abortions. One I will never forget. When she came into the ER, her vaginal cavity was packed with rags. She died a few days later from massive organ failure, caused by a septic infection.

In his published piece of legal culpability, Braid said the new law was like going back in time to 1972 “all over again.”

The law forces medical providers to look for the heartbeat of a fetus before performing an abortion and provides, specifically, that “a physician may not knowingly perform or induce an abortion on a pregnant woman unless the physician has determined, in accordance with this section, whether the woman’s unborn child has a detectable fetal heartbeat.”

“And that is why, on the morning of Sept. 6, I provided an abortion to a woman who, though still in her first trimester, was beyond the state’s new limit,” Braid’s opinion column notes. “I acted because I had a duty of care to this patient, as I do for all patients, and because she has a fundamental right to receive this care.”

Stilley read about that confession and is seeking a bounty of at least $10,000 as allowed for under the new Texas anti-abortion law.

Stilley’s unusual lawsuit seeks that statutorily-provided payment and described himself as a “disbarred and disgraced former Arkansas lawyer.”

“Plaintiff is currently on home confinement, in the custody of the United States Department of Justice-Federal Bureau of Prisons, (DOJ-FBOP) serving the 12 year of a 15 year federal sentence on utterly fraudulent federal charges of ‘tax evasion’ and ‘conspiracy,’ all of which repeatedly changed and morphed away from the purported grand jury indictment, to whatever new theory the government chose to espouse at a given time,” the suit says.

A 2010 article from Accounting Today recounts the conviction:

Tax attorney Oscar Amos Stilley, 46, of Fort Smith, Ark., and businessman Lindsey Kent Springer, 44, of Kellyville, Okla., were sentenced by U.S. District Judge Stephen P. Friot last Friday in a Tulsa, Okla., court. Both men were found guilty in a jury trial last November of conspiracy to defraud the United States and tax evasion. Springer was also convicted on a charge of failure to file tax returns. Neither man has filed an income tax return since the late 1980s.

Stilley’s lawsuit is, however, largely focused on Braid’s admitted violation of S.B. 8–and alleges that the attorney is “a qualified and suitable plaintiff, within the meaning of applicable law” because the statute “confers a private right of action upon ‘any person,’ without limitation as to residency or citizenship in the State of Texas, status as a felon, condition of ‘official detention,’ disbarment from the practice of law, public disgrace, difficulties getting due process, etc.”

The filing contains some vulgarity.

“Defendant knowingly performed this abortion contrary to the clear and unmistakable provisions of Senate Bill 8,” the lawsuit says. “On information and belief, Defendant is kind and patient and helpful toward bastards, but ideologically opposed to forcing any woman to produce another bastard against her own free will.”

There are also several religious themes throughout:

On information and belief, Defendant believes that his Elohim (“mighty ones,” AKA “God” is not offended because he aborts a defective fetus, at the request of the pregnant woman.
…
Plaintiff on the morning of September 20, 2021 placed a call to the office of Defendant, to inquire whether or not Defendant might repent of his ideology as well as his deeds, and agree never to perform another abortion contrary to the enactments of the Texas legislature in general, and the requirements of Senate Bill 8 in particular.

According to the Associated Press, Braid is being represented in the lawsuit by the Center for Reproductive Rights–one of the numerous plaintiffs who are challenging the underlying law in federal court.

“Dr. Braid has courageously stood up against this blatantly unconstitutional law,” the groups’s president and CEO Nancy Northup said in a statement. “We stand ready to defend him against the vigilante lawsuits that S.B. 8 threatens to unleash against those providing or supporting access to constitutionally protected abortion care.”

University of Texas Law Professor Steve Vladeck, an opponent of the law, predicted the doctor would come out on top.

“Dr. Braid is going to win—either because Stilley doesn’t have standing or because SB8 is unconstitutional under Casey,” he tweeted. “The problem is that his victory won’t bind anybody else, and won’t prevent other plaintiffs from bringing the same claims over and over again. That’s by design.”

Because a win for the defendant in this case–or any defendant in the future–would lack precedential value, Vladeck explained, lawsuits aimed at the law in federal court will prove instrumental for the future of the controversial legislation.

“That’s why the real key here is relief that bars suits to enforce SB8 from even being brought — whether by blocking the plaintiffs from bringing them or by blocking the courts from filing them,” the professor continued. “That’s the real ballgame here, and why the DOJ lawsuit is going to be so important.”