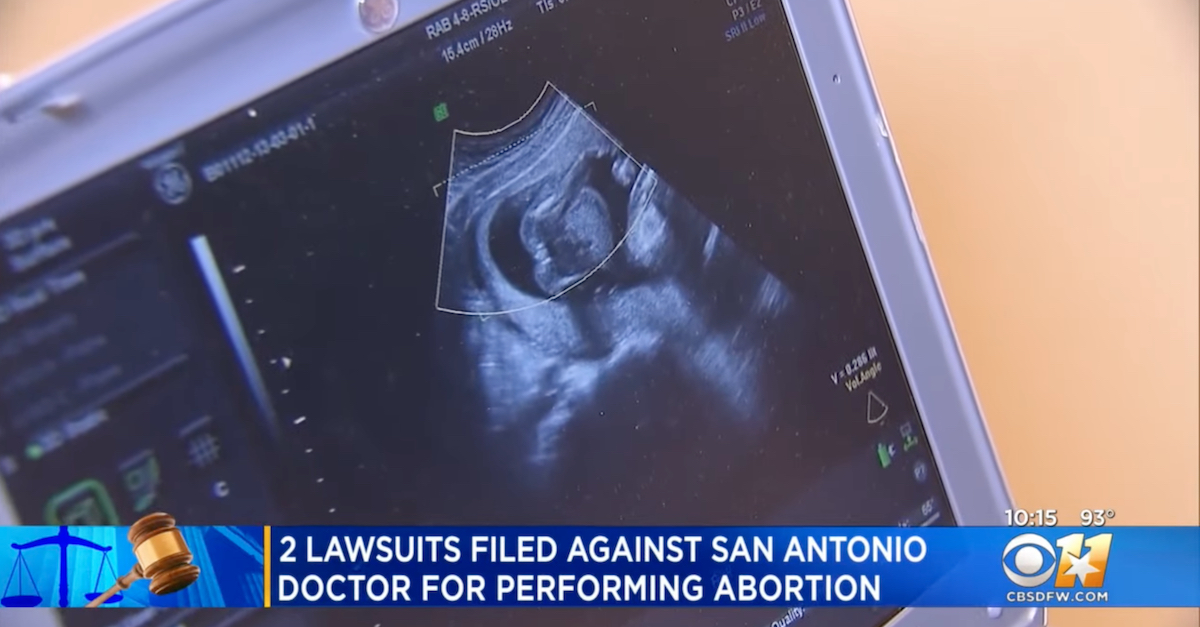 A second civil lawsuit was filed Monday against a Texas abortion doctor who admitted that he violated the Lone Star State’s sweeping abortion ban.

The ban, best known by its legislative moniker S.B. 8, took effect Sept. 1 after the Supreme Court of the United States refused to block it from taking effect. S.B. 8 prohibits abortions for any reason whatsoever — including in pregnancies which resulted from rape — after an embryo’s cardiac activity is detectable. Generally, that occurs approximately six weeks into pregnancy. S.B. 8 also allows anyone anywhere in the United States to file a claim alleging a violation.

The lawsuit is the second filed in Bexar County against Dr. Alan Braid. A similar case was also filed Monday morning.

The plaintiff, Felipe N. Gomez, describes himself as a “Pro Choice Plaintiff” in the case caption.

“On information and belief Texas resident Defendant Braid . . . performed an abortion in Texas on or about 9.6.21 where his patient was more than 6 weeks pregnant, which Sec. 171.208(a)(1) declares is illegal,” the two-page lawsuit says. “Plaintiff, a USA citizen (Illinois resident) and ‘person’ as defined in the Texas Hearbeat Act files this suit against Defendant, MOVES the Court to declare that the Act is Unconstitutional, and in violation of Roe v Wade.”

“Plaintiff alleges that Defendant did not violate Roe v Wade, and that the Act is illegal as written and as applied here until Roe v Wade is reversed or modified,” the lawsuit continues.

Braid wrote in a Sept. 18 Washington Post opinion piece that he performed an abortion in violation of Texas law. It appears to have been designed as legal bait for advocates — including Gomez.

“[O]n the morning of Sept. 6, I provided an abortion to a woman who, though still in her first trimester, was beyond the state’s new limit,” Baird wrote. “I acted because I had a duty of care to this patient, as I do for all patients, and because she has a fundamental right to receive this care.”

“I fully understood that there could be legal consequences,” Baird continued, “but I wanted to make sure that Texas didn’t get away with its bid to prevent this blatantly unconstitutional law from being tested.”

S.B. 8 allows a civil recovery of $10,000 or more against doctors who violate the abortion ban. But Gomez, who listed a Chicago address in the Texas lawsuit, told Law&Crime in a Tuesday phone call he was not asking for money. He said he was merely asking a court to declare S.B. 8 unconstitutional.

“This is how ridiculous the law is,” Gomez said. “Somebody who’s pro choice has to file to overturn it.”

He said his lawsuit was merely an attempt to challenge the legislature’s decision to allow random third-party plaintiffs intervene in an unrelated patient’s private medical decisions. He said S.B. 8 was “poorly written” and that he wanted to combat “government overreach.” He opined in comment to Law&Crime that the doctor/patient relationship should not be invaded by the government whether it comes to vaccines or abortion.

He also predicted that, despite the Supreme Court’s conservative majority, “this one won’t stand — I highly doubt they’ll overrule Roe.”

Gomez further commented that there was “no case or controversy” between any bona fide S.B. 8 plaintiff and any defendant — despite the Texas legislature’s attempt to create standing by statute. He said the courts should have serious issues with the constitutional ramifications of the Texas law as one which usurps the courts’ constitutional ability to decide whether standing exists.

Gomez confirmed via an email to Law&Crime that he was the subject of what he described as an “interim” suspension of his law license in the State of Illinois.

The U.S. Court of Appeals for the Seventh Circuit also agreed in a nonprecedential opinion dated Nov. 6, 2020 that Gomez should be disbarred in the Northern District of Illinois. From that opinion:

Gomez, who was licensed to practice law in 2004, was accused in April 2019 by the City Prosecutor of the City of Chicago of sending, through emails and voicemails, threatening and harassing communications to other attorneys. The Executive Committee for the Northern District of Illinois, which handles the court’s disciplinary proceedings, sent Gomez a show-cause order, directing him to explain why he should not be disciplined for violating ABA Model Rules of Professional Conduct 4.4(a) and 8.4(d) (regarding prejudicial and inappropriate conduct). Gomez did not respond—he maintains that he never received the show-cause order—and in June 2019, the Committee, finding him in violation of the ABA’s Model Rules, suspended him from practicing law in the district for four months.

In May and June 2019, the Committee received two more letters from local attorneys accusing Gomez of sending harassing and threatening emails. The Committee again ordered Gomez to show cause why he should not be further disciplined for violating the same two provisions of the ABA Model Rules. Gomez—who does not dispute that he received the new order—responded that his emails were not subject to discipline because, first, he had sent them in his capacity as a litigant and not as an attorney and, second, they were communications made in furtherance of settlement negotiations and thus protected under Federal Rule of Evidence 408.

In October, the Committee, invoking its authority to control abusive conduct before its court, see In re Chapman, 328 F.3d 903, 905 (7th Cir. 2003), ordered Gomez disbarred for two years.

The appellate panel noted that the lower district court ordered Gomez suspended for “two more years” due to additional allegations.

Gomez told Law&Crime that he was “challenging” his Illinois suspension — which he said “isn’t enforced until the Illinois Supreme Court reviews” the matter “as well as my objections and challenge . . . which is a long way down the road.” He said he expected to regain the ability to represent clients once the dust settles.

He described the attorneys who initiated the disciplinary proceedings against him as “crooks” who started complaining about him after he observed them “taking photographs in a federal courtroom of witnesses and evidence during a live trial” and committing other alleged transgressions which he said he “intend[ed] to prove.”

Lawyers are required to report certain types of alleged misconduct to the proper disciplinary authorities under Illinois Supreme Court Rule 8.3.

“Who cares what I did?” Gomez told Law&Crime with reference to those state and federal disciplinary matters — and he decried that activists were using his record to criticize his Texas case. He added that he was open to working with local counsel in Texas to help push his S.B. 8 lawsuit through the courts there.