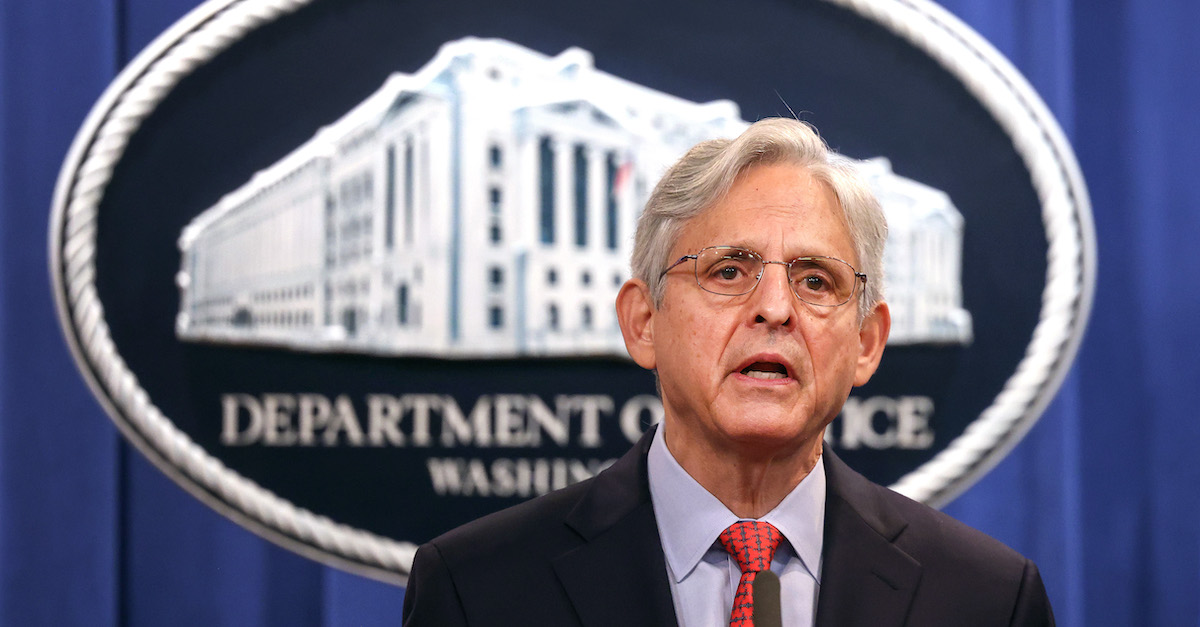 The U.S. Department of Justice on Thursday announced a significant legal challenge to a recently-enacted Texas anti-abortion law, S.B. 8 — a law which allows members of the public to sue anyone who “aids or abets” a woman who obtains an abortion and which bans abortions after six weeks of pregnancy.

The challenge comes in the form of a 27-page lawsuit challenging the restrictive new law’s constitutionality.

“It is settled constitutional law that ‘a State may not prohibit any woman from making the ultimate decision to terminate her pregnancy before viability,'” the DOJ noted in the filing. “But Texas has done just that. It has enacted a statute banning nearly all abortions in the State after six weeks—months before a pregnancy is viable.”

DOJ made sure to cite Chief Justice John Roberts’ Sept. 1 dissent high up in the filing to illustrate why the “unprecedented” statutory “scheme” was written the way it was:

Texas enacted S.B. 8 in open defiance of the Constitution. The statute prohibits most pre-viability abortions, even in cases of rape, sexual abuse, or incest. It also prohibits any effort to aid—or, indeed, any intent to aid—the doctors who provide pre-viability abortions or the women who exercise their right to seek one. Because S.B. 8 clearly violates the Constitution, Texas adopted an unprecedented scheme “to insulate the State from responsibility,” Whole Woman’s Health v. Jackson, No. 21A24, 2021 WL 3910722, at *1 (U.S. Sept. 1, 2021) (Roberts, C.J., dissenting), by making the statute harder to challenge in court.

The lawsuit claims violations of the 14th Amendment and the Supremacy Clause and that it violates the doctrine of intergovernmental immunity. The lawsuit additionally claims that S.B. 8 conflicts with federal law and is therefore preempted.

A docket in the Western District of Texas showed the case stylized as United States of America v. State of Texas late Thursday afternoon.

“The Department of Justice has a duty to uphold the Constitution and uphold the rule of law,” Garland added–saying that job had been fulfilled with the filing of the litigation that seeks a “preliminary and permanent injunction against the State of Texas—including all of its officers, employees, and agents, including private parties who would bring suit under S.B. 8— prohibiting any and all enforcement of S.B. 8.”

The controversial law went into effect on Sept. 1 after the Fifth Circuit Court of Appeals denied a request by abortion providers, health care advocates and civil libertarians to enjoin the measure that effectively bans abortions six weeks after a woman becomes pregnant.

A district court in Texas was prepared to consider such an injunction but those proceedings were summarily paused by the Fifth Circuit in late August, which also canceled a previously-scheduled hearing on the injunctive relief, after governmental defendants in the Lone Star State appealed to the traditionally conservative appellate body.

The pro-abortion plaintiffs then appealed to the Supreme Court–asking the nation’s highest court to unpause the proceedings and let the trial court consider the anti-abortion law on the merits. The high court declined. First, the court’s initial inaction allowed S.B. 8 to go into effect. The next day, in a 5-4 decision, the conservative majority on the Supreme Court’s “shadow docket” formally declined to grant injunctive relief.

“Taken together, the Act is a breathtaking act of defiance—of the Constitution, of this Court’s precedents, and of the rights of women seeking abortions throughout Texas,” Justice Sonia Sotomayor said in one of four dissents. “But over six weeks after the applicants filed suit to prevent the Act from taking effect, a Fifth Circuit panel abruptly stayed all proceedings before the District Court and vacated a preliminary injunction hearing that was scheduled to begin on Monday.The applicants requested emergency re- lief from this Court, but the Court said nothing.”

After S.B. 8 became the law, abortion providers in Texas feared the law’s highly punitive consequences and novel system of enforcement.

Termed the “Texas Heartbeat Act,” S.B. 8 forces medical providers to look for the heartbeat of a fetus before performing an abortion and provides, specifically, that “a physician may not knowingly perform or induce an abortion on a pregnant woman unless the physician has determined, in accordance with this section, whether the woman’s unborn child has a detectable fetal heartbeat.”

The American Civil Liberties Union described the law as including a “bounty-hunting scheme, encouraging private individuals to sue anyone in Texas who violates the law.”

Part of a coalition suing to stop S.B. 8 from taking effect, the ACLU continued in a press release: “A reward of at least $10,000 will be given to anyone who successfully sues a doctor, health center worker, or any person who helps someone obtain an abortion after six weeks of pregnancy. Lawsuits may be filed against a broad range of people, including: a person who drives their friend to obtain an abortion; abortion funds providing financial assistance to patients; health center staff; and even a member of the clergy who assists an abortion patient.”

Lawyers at the DOJ have been “evaluating all options” in combatting SB8, Garland said on Labor Day.

“The Justice Department is deeply concerned about Texas SB8,” Garland said in a statement after the high court’s decision to let the law stand. “We are evaluating all options to protect the constitutional rights of women, including access to an abortion.”

Law&Crime reached out to the Texas Attorney General’s Office for comment on this story but no response was forthcoming at the time of publication.