Trump's Defense in Jan. 6th Suit: What About Bernie Sanders?

In Attempt to Deflect and Dismiss Lawsuit Accusing Him of Inciting Jan. 6, Trump Says: What About Bernie Sanders, Chuck Schumer, and Cori Bush?

In a legal brief resembling one of his freewheeling campaign speeches and impeachment defense montages, Donald Trump went on the attack against lawmakers like Sen. Bernie Sanders (I-Vt.), Sen. Chuck Schumer (D-N.Y.), and Rep. Cori Bush (D-Mo.) to depict the former president’s speech in the lead-up to the Jan. 6 siege of the U.S. Capitol as routine political rhetoric.

In the brief, the former president casts his efforts to subvert the 2020 election and block its legally mandated certification as merely “exercising a specific constitutional duty to take care that the laws be faithfully executed.”

“President Trump had an ever-present duty to ensure the election laws were followed, including the certification process,” Binnall wrote.

The argument turns on its head an argument deployed against Trump, accusing him of violating that duty.

“The Worst and Most Dangerous President”

On Monday night, Binnall offered new scapegoats for why Trump should not be held liable under Rep. Eric Swalwell’s (D-Calif.) lawsuit for inciting the violence meant to block the certification of President Joe Biden’s election—namely, Democratic lawmakers and their allies.

“Given the numerous protests over the years on Capitol Hill and the necessity of protecting political speech—the very type of speech the First Amendment was designed to protect—a holding that individuals can be liable for violence by random listeners if their words could be interpreted as a threat would nearly shut down Washington,” Binnall wrote in a 30-page legal brief.

Trump tried to analogize his rhetoric to a remark by Sanders’s speech on June 10, 2017, bemoaning what he called the “the worst and most dangerous President in the history of our country” and “extreme right-wing leadership in the U.S. House and the U.S. Senate.”

In the style of an attack ad, the legal brief includes a darkened still image from Sanders’s speech alongside a frame from a news report from the shooting. 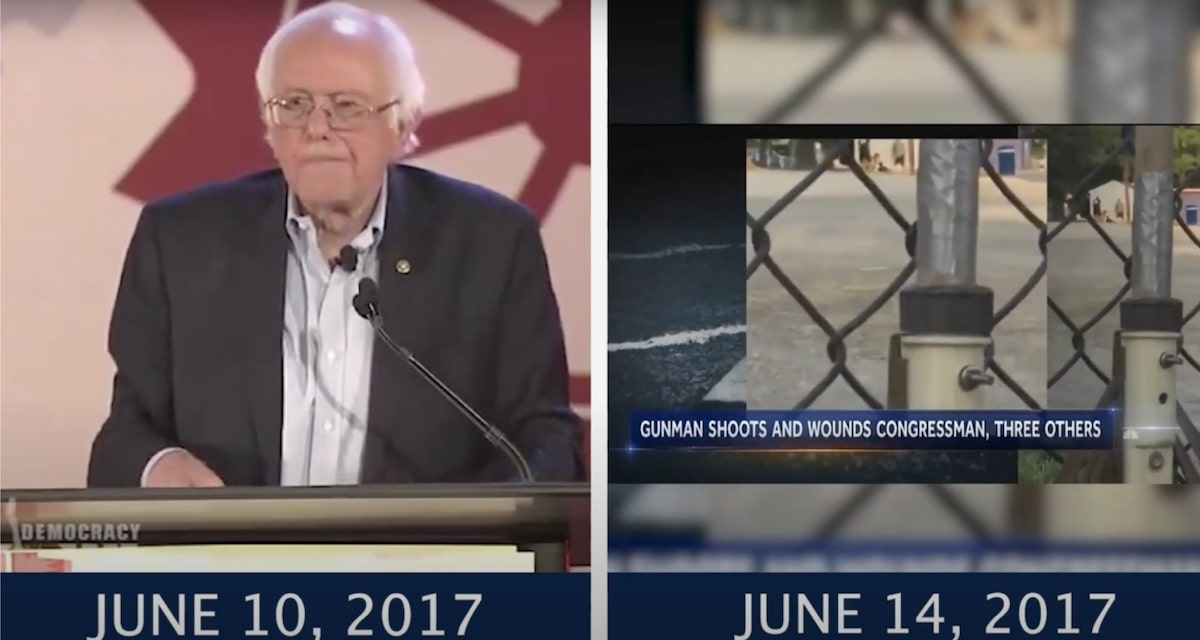 Trump’s new legal brief juxtaposes Sen. Bernie Sanders’s campaign speech next to Rep. Steve Scalise’s shooting to analogize it to his rhetoric before Jan. 6th. Some four years after the shooting, no causal link has emerged between Sanders, who did not mention Scalise, and the shooting.

Noting that Scalise never sued Sanders, Binnall wrote: “Perhaps Rep. Scalise even remembered Sir Thomas Moore’s [sic] celebrated lines from A Man for All Seasons: ‘[t]his country is planted thick with laws, from coast to coast, Man’s laws, not God’s! And if you cut them down. . . do you really think you could stand upright in the winds that would blow then?'”

In the cases of Schumer and Bush, Binnall does not even offer a strained argument for linking their rhetoric to actual political violence—only the hypothetical kind. Binnall posed a thought experiment of Schumer supporters acting upon the Senate Majority Leader’s widely-criticized remarks that Justices Neil Gorsuch and Brett Kavanaugh “released the whirlwind” and will “pay the price,” during an abortion rights rally in March 2020. Chief Justice John Roberts issued a rare rebuke of Schumer’s comments at the time.

“While his words were undoubtedly irresponsible, they were not actionable, and would not have been even if any actual harm befell the Justices from those who claimed they were inspired by Schumer’s words,” Binnall wrote, floating the potential ripples of an event that did not happen. “If every individual had to police her speech to ensure it could never be perceived as a threat in light of later events, nearly all political discussion would be off the table.”

The reference to Rep. Bush is fleeting and comes in the form of a footnote, linking to news coverage of the Missouri Democrat’s protest outside the U.S. Capitol in support of relief for tenants facing the threat of eviction. Entirely peaceful, Bush’s demonstration drew from her own experience being kicked out of her home long before her election, and the protest arguably led only to building political momentum that pushed the Biden administration to extend the eviction moratorium.

Binnall’s legal brief does not appear to explain the reason for the citation.

Together with three other prominent lawyers—Berkeley School of Law Professor Erwin Chemerinsky, Harvard University Professor Martha Minow, and Carl M. Loeb Harvard University Professor Emeritus Laurence Tribe—Abrams submitted a friend-of-the-court brief in July advising a federal judge as to how the courts could protect political rhetoric while allowing for accountability for what they called the “most spectacular example of incitement” in U.S. history.

Trump’s salvo accuses the amicus brief’s signers of “political and personal animosity” toward him.