‘The Most Spectacular Example of Incitement’: First Amendment Icons Back Eric Swalwell in Lawsuit Against Donald Trump for Jan. 6th Siege 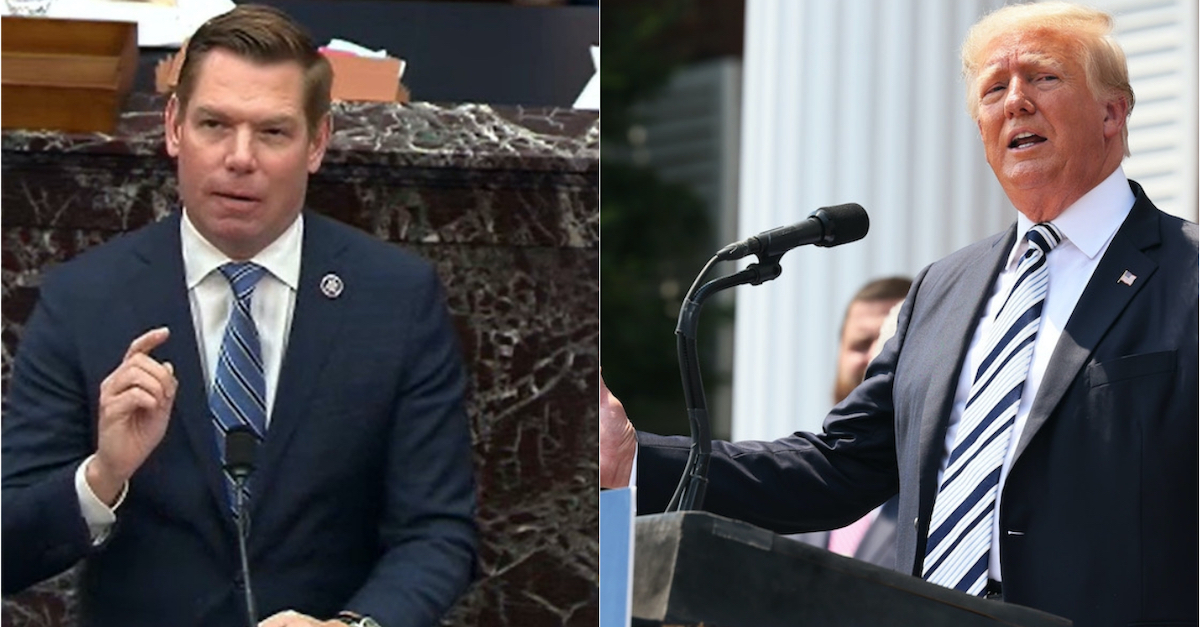 Rep. Eric Swalwell (D-Calif.), seen on the left arguing to convict former President Trump of inciting the Jan. 6th siege on the U.S. Capitol Complex, sued Trump, his allies, and other prominent Republicans in federal court.

Former President Donald Trump, his political allies, and his supporters have tried to fend off any allegations that they incited a so-called “insurrection” on Jan. 6th by arguing that they merely engaged in “political speech.” A coalition of the nation’s leading First Amendment scholars rejected that “spurious” defense on Thursday, backing former impeachment manager Rep. Eric Swalwell (D-Calif.) and others in their lawsuits against Trump.

Led by Pentagon Papers lawyer Floyd Abrams, the four scholars threw their support behind two Democratic lawmakers accusing Trump and others of violating the Ku Klux Klan Act and other statutes by provoking the siege of the U.S. Capitol. The coalition also backed two U.S. Capitol Police officers accusing Trump of “directing” their assault.

“Although the January 6 insurrection may be the most spectacular example of incitement and ‘true threat’ in American history, modern political intimidation often takes subtler forms that these statutes can address effectively—if they do not become neutered by a mistaken application of First Amendment principles,” the scholars noted in a 23-page friend-of-the-court brief. “Today, for example, ‘voters are rarely overtly threatened with physical or economic harm as they were during the civil rights era; instead, voters are deterred from voting through subtler tactics, such as aggressive poll-watching, anonymous threats of harm, frivolous and excessive voter registration challenges, and coercion by employers.'”

Trump and his loyalists tried to swat away the claims by asserting protection for “political speech,” but the First Amendment amici urged the court to reject those “spurious and thinly developed” defenses and “do so on grounds that preserve the effectiveness of political-intimidation statutes generally.”

Chief among those statutes is a subsection of the Ku Klux Klan Act, passed in 1871 to clamp down on attempts to terrorize and disenfranchise formerly enslaved people.

According to their brief, the scholars affirm that they “harbor little doubt” that the Ku Klux Klan Act’s application to the events of Jan. 6th falls within the “incitement and true-threats exceptions” of the First Amendment.

“As the history of these statutes demonstrates, throughout much of our national existence it has been government policy to allow white-supremacist terrorism to prevail over the democratic rights of minorities, particularly in the South,” the brief states. “It took a bloody Civil War and a hard-fought Civil Rights movement to end that policy and to establish the government’s democracy-protecting function as a fundamental attribute of, and justification for, federal power. The political-intimidation statutes were part and parcel of that revolution.”

The scholars argued that the court “should hold that the First Amendment does not protect, and historically has not protected, speech integral to the forms of political intimidation” envisioned under the KKK Act’s Section 1985(1), which authorizes damages against anyone who conspires to “prevent by force, intimidation or threat any person from accepting any office [or] trust . . . under the United States, or discharging any duties therefor.”

Trump’s lawyer Jesse Binnall, who engaged in the failed efforts to topple the election results in Nevada and represents the former president in Swalwell’s litigation, did not immediately respond to an email requesting comment in connection with the amicus brief.

None of the defendants being prosecuted criminally in connection with the Jan. 6th siege is charged with insurrection, criminal incitement, or rioting.  The amicus brief uses those word “insurrection” and “incitement” in the civil context for purposes of First Amendment law.

Read the friend-of-the-court brief below: