Chuck Schumer: Gorsuch and Kavanaugh Will ‘Pay the Price’ if They Vote to Roll Back Abortion Rights 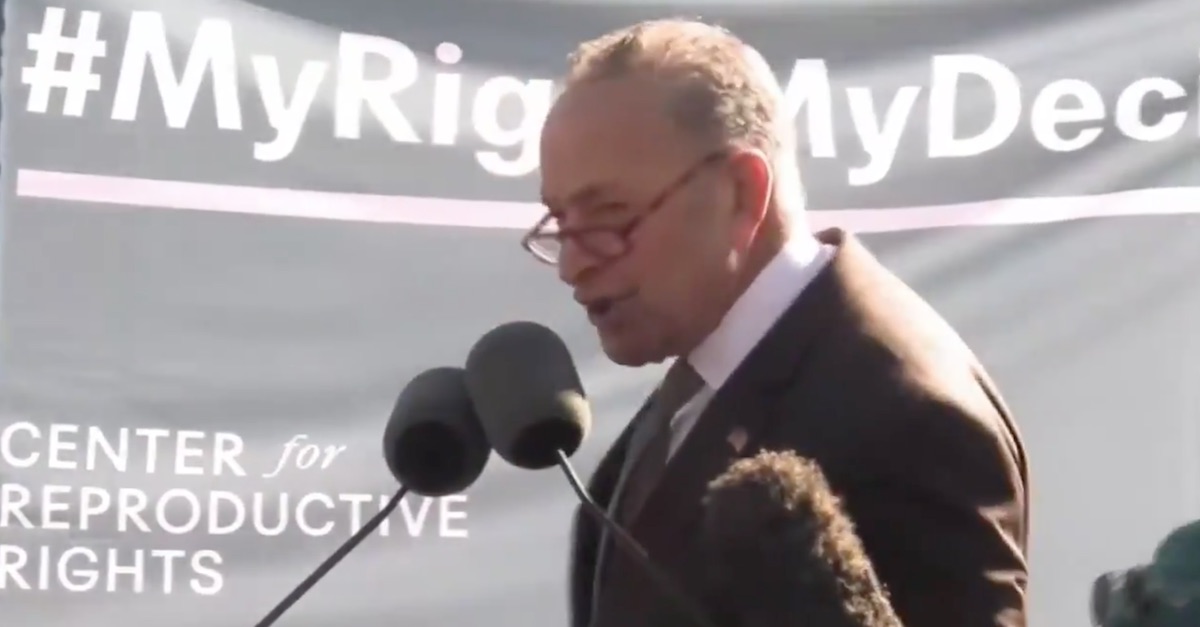 Senate Minority Leader Chuck Schumer (D-N.Y.) declared Wednesday from a podium outside of the Supreme Court that conservative Justices Neil Gorsuch and Brett Kavanaugh would “pay the price” if they rule how everyone presumes they will in high-profile abortion cases.

The speech happened on a day when the Supreme Court heard oral arguments in June Medical Services L.L.C. v. Russo. It is the first major abortion case to come before the court since President Donald Trump appointed Gorsuch and Kavanaugh to the high court.

“I want to tell you, Gorsuch. I want to tell you, Kavanaugh. You have released the whirlwind, and you will pay the price,” Schumer said to a crowd of pro-choice advocates affiliated with and supportive of the Center for Reproductive Rights. “You won’t know what hit you if you go forward with these awful decisions.”

Conservatives were livid. They wondered if reporters would ask every Senate Democrat if they agreed with Schumer “threatening Supreme Court Justices” (which they would ask of Republican lawmakers if Mitch McConnell or Trump went after liberal Supreme Court justices or other members of the judiciary).

Did Chuck Schumer just threaten SCOTUS Gorsuch and Kavanaugh with violence if they vote against abortion?

I think he did.

How else could he make a SCOTUS judge "pay-the-price?" These are lifetime appointments. They can't lose an election.

What did you MEAN Chuckles?

Reporters should be asking every Senate Democrat:

Do you agree with your leader threatening Supreme Court Justices?

“I want to tell you Justice Kavanaugh and Justice Gorsuch: You have unleashed a whirlwind, and you will pay the price!” – Chuck Schumer pic.twitter.com/jyAgpE9HVv

In which Chuck Schumer threatens TWO sitting Associate Justices of the Supreme Court of the United States. pic.twitter.com/pA3mryeVK2

This is shocking. A thuggish attempt to intimidate the Supreme Court. Imagine if Trump said this about two of the liberal justices! https://t.co/tN9EQjKCPS

“You won’t know what hit you, if you go forward with these awful decisions.”https://t.co/pAzImeGC4S https://t.co/a1IPcU2vi5

Some immediately asked whether other context of the speech made the remarks “less troubling.”

Senator Schumer tells two Justices that if they rule a particular way, "you will pay the price. . you won't know what hit you." For those who have seen the full speech, is there some context that makes this less troubling a comment than it seems? https://t.co/OhtUuO24qh

And I should emphasize that my first question wasn't rhetorical, but was a real question: Is there a context that makes this less troubling? The 21 second clip is circulating, but I want to know what came before/after it to understand what Senator Schumer was saying. Link?

So maybe that makes it implicit in context that the price would be an electoral price? That would be odd, as the Justices aren't up for election. But at least it's something. Curious what others think from the context. /2

After the 2:15:00 mark, Schumer said that the “bottom line is very simple”: Trump and Senate Republicans who put Gorsuch and Kavanaugh on the Supreme Court will be “gone in November.”

“You hear that over there on the far right? You’re going to be gone in November,” he said.

The clip of the speech shared from Schumer’s official Twitter account did not include the “pay the price” remarks.

It looks at 1 of 100s of draconian, anti-choice restrictions states tried to pass

We’re here to send a message: Not on our watch! pic.twitter.com/cdjCfe32wi

“Any statements that can be understood to threaten judges personally are completely out of line. Equally offensive are statements that can appear to be designed to intimidate judges in deciding questions of the law,” he said in a statement obtained by Law&Crime. “We have to be better than that in a civil society.”

“It is designed to intimidate them. This behavior cannot be countenanced. Indeed, it has to be condemned as unconstitutional conduct,” Rivkin also said in statement.

Editor’s note: this story was updated post-publication with statements from Rivkin and Terwilliger, and to note Chief Justice Roberts’s response.