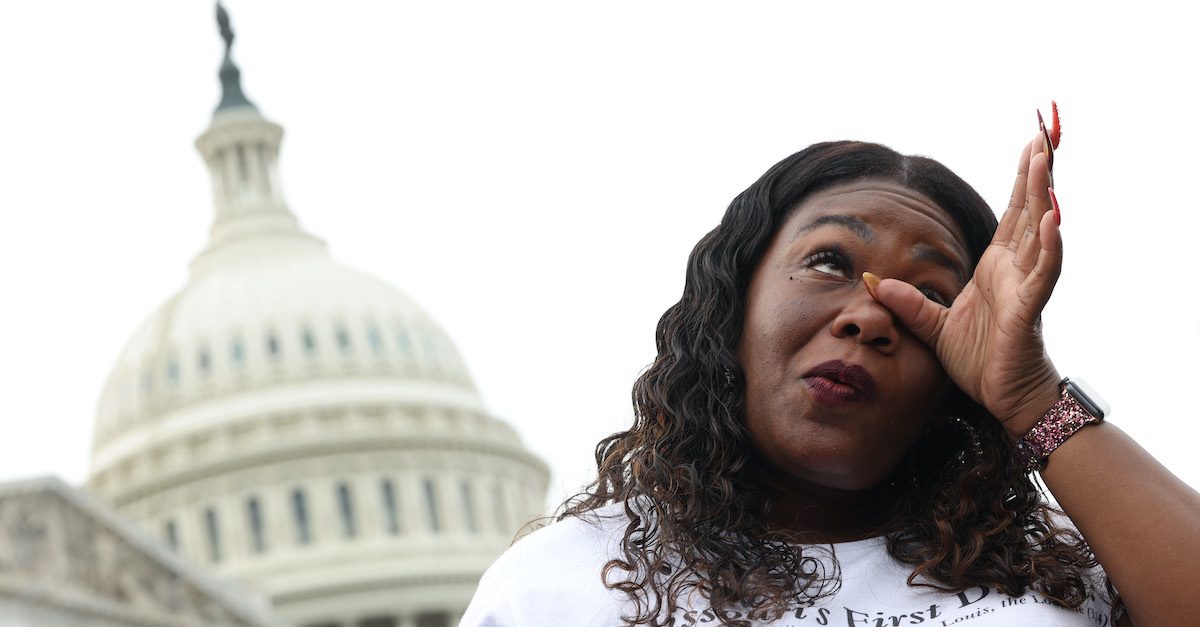 Rep. Cori Bush (D-MO) becomes emotional during a news conference on the eviction moratorium at the Capitol on Aug. 3, 2021 in Washington, DC.

In a win for the Biden administration, the same federal judge who blocked a pandemic-related eviction moratorium allowed its extension to continue because an appellate court stayed the prior injunction.

That victory, however, could prove fleeting as the judge noted that the Supreme Court appeared to signal a willingness to block the moratorium, if it did not naturally expire.

The White House statement, from Press Secretary Jen Psaki, appears to acknowledge as much.

“The Administration believes that CDC’s new moratorium is a proper use of its lawful authority to protect the public health,” Psaki wrote. “We are pleased that the district court left the moratorium in place, though we are aware that further proceedings in this case are likely.”

Anticipating ongoing legal challenges, Psaki urged state and local lawmakers to “move aggressively to distribute the $46.5 billion in emergency rental assistance funds that are available through the bipartisan COVID relief act that Congress passed in December 2020, and through the President’s American Rescue Plan that was enacted in March 2021.” The Biden administration also “calls on landlords to seek out rental assistance and not evict tenants from their homes, and echoes Attorney General Garland’s calls for state and local courts to implement policies to discourage eviction filings until landlords and tenants have sought emergency rental assistance funds,” she said.

Such measures, the White House argues, can provide tenants relief amid a legal juggernaut seeking to resume evictions.

The latest salvo in against the eviction moratorium began when coalition of realtors, landlords and management companies—led by the Alabama Association of Realtors—accused the Biden administration’s Centers on Disease Control and Prevention of caving to what they called “tidal wave of political pressure” to extend the eviction moratorium.

“The facts speak for themselves,” attorney Brett A. Shumate, a former Justice Department lawyer now representing the realtors and landlords, told a federal judge during a hearing on Monday.

In May, Judge Friedrich blocked an earlier CDC order as “unambiguously foreclosed by the plain language of the Public Health Service Act.” The Biden administration appealed that ruling and obtained a stay of Friedrich’s ruling from the D.C. Circuit. The Supreme Court declined to intervene from there because, in the words of Justice Brett Kavanaugh, the “CDC plans to end the moratorium in only a few weeks.”

Judge Friedrich noted that the realtors would likely find relief from the GOP-dominated Supreme Court.

“It is true that the Supreme Court’s recent decision in this case strongly suggests that the CDC is unlikely to succeed on the merits,” the judge noted. “Four Supreme Court Justices voted to vacate the stay, ‘an action which would have been improbable if not impossible had the government, as the stay applicant, . . . made a strong showing that it was likely to succeed on the merits.'”

“A New Chapter of This Pandemic”

During oral arguments earlier in the week, Shumate argued that Justice Kavanaugh’s concurrence showed even Biden the writing on the wall that any extension of the eviction moratorium would have been a dead letter before the high court.

Before Monday’s hearing, the realtors quoted Biden suggesting as much by stating last week: “The courts made it clear that the existing moratorium was not constitutional.”

For now, the D.C. Circuit’s stay of Judge Friedrich’s ruling still stands, and Kavanaugh’s concurrence did not overturn it, whether or not it signaled a shot across the bow.

“These intervening decisions call into question the D.C. Circuit’s conclusion that the CDC is likely to succeed on the merits,” Friedrich wrote. “For that reason, absent the D.C. Circuit’s judgment, this Court would vacate the stay. But the Court’s hands are tied. The Supreme Court did not issue a controlling opinion in this case, and circuit precedent provides that the votes of dissenting Justices may not be combined with that of a concurring Justice to create binding law.”

During Monday’s hearing, Friedrich also had sharp questions for Department of Justice attorney Brian Netter, asking him whether the administration was engaging in “gamesmanship.”

Netter argued that there were sound public health reasons for the reversal.

“We are here today because of the delta variant, because cases increased seven-fold,” Netter said.

“We’re in a new chapter of this pandemic,” he added later.

Speaking about her own struggles with eviction prior to attaining public office, Rep. Cori Bush (D-Mo.) spent three days and nights in front of the U.S. Capitol before the CDC extended the moratorium. She and her husband lived in a Ford Explorer with their two young children some two decades before she became a congresswoman. The pressure she helped build has been credited, at least in part, with the administration’s actions.

Though the most dramatic example, Rep. Bush was hardly the only lawmaker urging an extension of the CDC’s moratorium. Rep. Maxine Waters (D-Calif.) appeared to dare the agency to take action.

“Who is going to stop them? Who is going to penalize them?” Waters asked in an Aug. 2nd tweet, cited by the realtors. “There is no official ruling saying that they cannot extend this moratorium. C’mon CDC – have a heart! Just do it!”

The Washington Post’s editorial board agreed that renters need relief, but the paper opined that the eviction moratorium was “almost certainly illegal.”

“If the Trump administration had ignored a direct warning from the Supreme Court, Democrats would rightfully line up to condemn the president,” the editorial read. “Mr. Biden does not get a pass on the rule of law because his heart is in the right place.”

The realtor sounded a similar note of indignation.

“The court should not tolerate the government getting away with this,” Shumate said.

Characterizing the ruling as “technical” and “procedural,” counsel for the realtors said this team plans to “return in short order to the D.C. Circuit Court and then again to the Supreme Court if necessary.”

“We are confident in our position that this unlawful eviction ban will soon come to an end,” he added. “Federal and state governments should be focusing all energy on the swift distribution of nearly $50 billion in rental assistance available for struggling tenants.”

Update—Aug. 13 at 2:48 p.m. Eastern Time: This story has been updated to include the White House’s statement.

Update—Aug. 13 at 5:57 p.m.: A second update has been added to included the realtors’ counsel’s statement.