Rudy Giuliani Claims Trump Was Trying to ‘Preserve’ Documents by Keeping Them ‘Safe’ at Mar-a-Lago, But His Legal Explanation Seems to Be Lacking 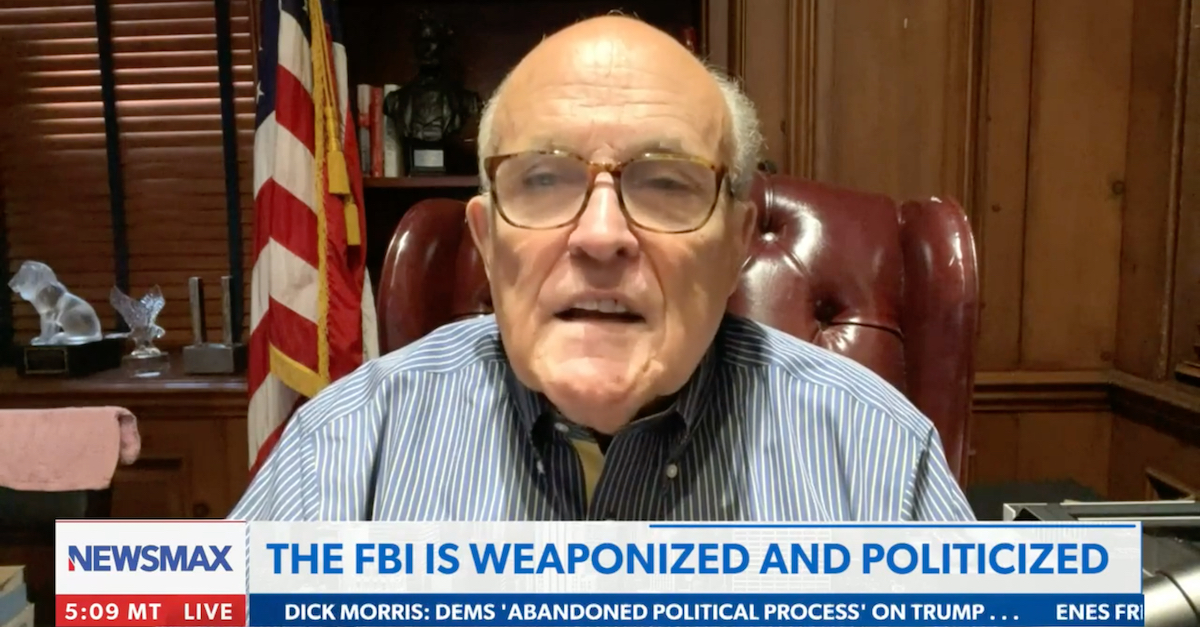 Rudy Giuliani, a onetime attorney to Donald Trump, claims the ex-president was simply trying to “preserve” whatever documents were recently gathered during an FBI search at Mar-a-Lago.

Giuliani made the comments Thursday on Newsmax program “Rob Schmitt Tonight,” but his explanation as to the underlying law appears not to be entirely accurate.

The former New York City mayor claimed the search was part of a “conspiracy” to “take him [Trump] out by any means.”

“Now, they want to make him responsible for having taken classified document and preserve them,” Giuliani asserted.

Giuliani then went on to pontificate about what he believed is — and is not — illegal under the Espionage Act.

Several sections of the Espionage Act were cited in portions of the search warrant made public in two separate offerings over the last several weeks.  The “[p]roperty to be seized” was defined as “all physical documents and records constituting evidence, contraband, fruits of crime, or other items illegally possessed in violation of 18 U.S.C. §§ 793, 2071, or 1519.”

While it is unclear precisely what subsection of § 793 might be applied here, it appears subsection (d) applies more broadly than Giuliani suggested.  The statute applies to someone who “willfully retains” documents to which had lawful “possession,” “access,” or “control.”  The government, however, has to demand the return of the material for the statute to kick in.

Here’s § 793(d) (minus a connective word which links it to a separate subsequent subsection); we’ve added italics to the relevant part:

Whoever, lawfully having possession of, access to, control over, or being entrusted with any document, writing, code book, signal book, sketch, photograph, photographic negative, blueprint, plan, map, model, instrument, appliance, or note relating to the national defense, or information relating to the national defense which information the possessor has reason to believe could be used to the injury of the United States or to the advantage of any foreign nation, willfully communicates, delivers, transmits or causes to be communicated, delivered, or transmitted or attempts to communicate, deliver, transmit or cause to be communicated, delivered or transmitted the same to any person not entitled to receive it, or willfully retains the same and fails to deliver it on demand to the officer or employee of the United States entitled to receive it[.]

Notably, the statute does not only involve the more specific or narrow actions of “destroying,” “hiding,” or “giving” the documents, which is what Giuliani claimed.  While it does criminalize certain types of communication, delivery, and transmission, it can also involve the mere act of retention.  In other words, possession is enough to trigger one subsection of the law cited on the Mar-a-Lago warrant.

Law&Crime explained the statutes cited in the warrant in a previous report.

Later during the Newsmax interview, Giuliani asserted that Trump offered to give some of his materials back to the government when requested.

“They already got 15 cartons back voluntarily,” he claimed.

Giuliani then suggested that the government was “satisfied” with the way Trump promised to secure the remaining materials in his possession.

But then came the search on Aug. 8.

Giuliani then suggested that the thus-unsealed FBI affidavit in support of the warrant needed to assert that something changed between when those alleged agreements were made for Trump to retain certain materials in a secure fashion and when the subsequent search warrant was executed.

Giuliani also sounded off against a list of people he perceived as Trump foes and asserted that America might be “too dumb to be a democracy” if it didn’t believe his versions of events — which included that the 2020 election was stolen.

“They will frame him with every single thing they’ve got,” Giuliani then asserted as to Trump.

Newsmax has previously apologized for airing vote-rigging claims connected to the 2020 election.

Giuliani is under investigation by legal ethics authorities in Washington, D.C., over his failed attempt to litigation a 2020 election case in Pennsylvania.  His law license faced repercussions in New York as well — a fact he bemoaned on Newsmax.

He’s also been embroiled in multiple lawsuits concerning his conduct surrounding the 2020 election, and he is further involved in a subsequent investigation into the election in Georgia.