Rudy Giuliani, Lindsey Graham, and Others Subpoenaed by DA in Fulton County, Georgia over Efforts to Overturn 2020 Presidential Election 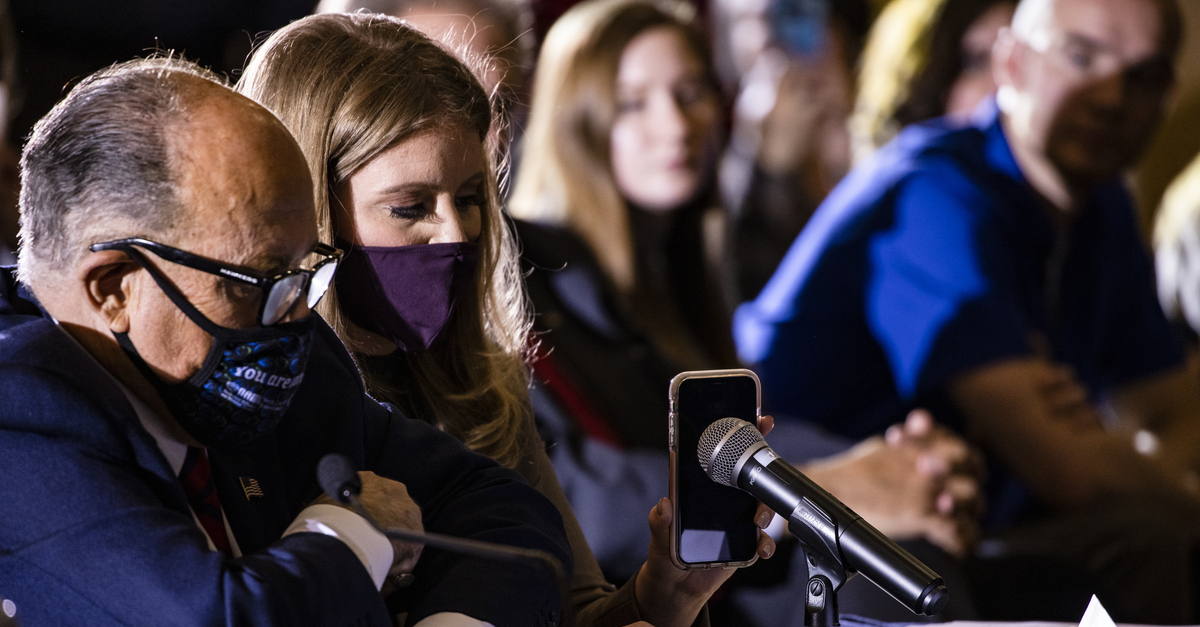 GETTYSBURG, PA – NOVEMBER 25: Jenna Ellis, a member of President Donald Trumps legal team, holds up a cell phone to the microphone so President Trump can speak during a Pennsylvania Senate Majority Policy Committee public hearing Wednesday at the Wyndham Gettysburg Hotel to discuss 2020 election issues and irregularities on November 25, 2020 in Gettysburg, Pennsylvania. Giuliani is continuing his push to overturn election results in the courts.

In addition to the subpoenas sent to from Giuliani and Graham, Fulton County District Attorney Fani Willis recently requested sworn testimony from Trump campaign attorneys Kenneth Chesebro, John Eastman, Cleta Mitchell, and Jenna Ellis over their roles in the plan to give the Peach State’s electoral college votes to the 45th president. Right-wing podcast host Jacki Pick Deason was also subpoenaed in her capacity as a former attorney for the Trump 2020 campaign.

Substantially similar in many respects, the subpoena requests were signed off on by Fulton Superior Court Judge Robert McBurney, who is overseeing a 23-member grand jury into allegations that the Trump campaign subjected Georgia’s elections to “possible criminal disruptions,” as a January 2022 letter outlining the probe explains.

That special purpose grand jury was ordered empaneled in May of this year by McBurney’s court, the Giuliani subpoena notes, and is “authorized to investigate any and all facts and circumstances relating directly or indirectly to possible attempts to disrupt the lawful administration of the 2020 elections in the State of Georgia.”

“Based on the representations made by [Willis’ office],” the subpoena goes on, “the Court finds that Rudolph William Louis Giuliani, born May 29, 1944, is a necessary and material witness.”

The court’s order notes that Giuliani was “both a personal attorney for former President Donald Trump and a lead attorney for the Trump Campaign’s legal efforts seeking to influence the results of the November 2020 election in Georgia and elsewhere.”

The document goes on to detail why the former mayor of New York City is now wanted for questioning under oath:

As part of those efforts, on December 3, 2020, [Giuliani] and other individuals known to be associated with both him and the Trump Campaign appeared publicly before the Georgia State Senate at the Georgia State Capitol in Atlanta, Fulton County, Georgia. At that hearing, [Giuliani] provided testimony, additional witnesses, and documentary evidence purporting to demonstrate the existence of election fraud in multiple Georgia counties during the administration of the November 2020 election. Among the evidence offered by [Giuliani] was a video recording of election workers at State Farm Arena in Atlanta that purported to show election workers producing “suitcases” of unlawful ballots from unknown sources, outside the view of election poll watchers. Within 24 hours of the December 3, 2020, legislative hearing, the Georgia Secretary of State’s Office debunked the State Farm video and explained that its investigation revealed no voter fraud of any kind had taken place at State Farm Arena.

At a recent hearing before the Jan. 6 Committee, election worker Shaye Moss testified that Giuliani’s smear campaign led to threats against her and her mother, Ruby Freeman.

“There is evidence that [Giuliani’s] appearance and testimony at the hearing was part of multi-state, coordinated plan by the Trump Campaign to influence the results of the November 2020 election in Georgia and elsewhere,” the subpoena states.

The Fulton County District Attorney believes that Giuliani “possesses unique knowledge concerning” how the debunked video was acquired by the Trump campaign and “the manner of its presentation to the Georgia State Senate as well as knowledge of the origin of numerous other claims of election fraud alleged in legal filings and to the public” by himself, Trump, and others “known and unknown.”

“Finally, [Giuliani’s] anticipated testimony is essential in that it is likely to reveal additional sources of information regarding the subject of this investigation,” the subpoena states.

Though the judge authorized the various subpoenas on June 28 and July 1, they were all made public for the first time on Thursday.

Though largely boilerplate, the subpoenas due contain allegations specific to each of the would-be witnesses.

The Chesebro subpoena implicates the Harvard-educated appellate attorney in a plot to convene a slate of alternate electors who would have voted for Trump instead of the actual winner in Georgia:

This work included the coordination and execution of a plan to have 16 individuals meet at the Georgia State Capitol on December 14, 2020, to cast purported clectoral college votes in favor of former President Donald Trump, even though none of those 16 individuals had been ascertained as Georgia’s certified presidential electors by Georgia Governor Brian Kemp. The Witness drafted at least two memoranda in support of this plan, which were provided to the Georgia Republican Party, and the Witness provided template Microsoft Word documents to be used by the Georgia Republican Party at its meeting on December 14, 2020. Further, the Witness indicated in communications with the Georgia Republican Party that he had worked directly with Trump Campaign attorney Rudy Giuliani as part of the coordination and execution of the plan.

The Graham order relates to “at least two telephone calls” the senior senator from South Carolina made to Raffensperger and members of his staff “in the weeks following the November 2020 election in Georgia.”

“During the telephone calls, [Graham] questioned Secretary Raffensperger and his staff about reexamining certain absentee ballots cast in Georgia in order to explore the possibility of a more favorable outcome for former President Donald Trump,” the subpoena says.

In one such call, the senator allegedly asked Raffensperger whether he had the power to throw out all mail ballots in certain counties based on signature match rates, The Washington Post previously reported.

The subpoenas and accompanying exhibits can be viewed below: