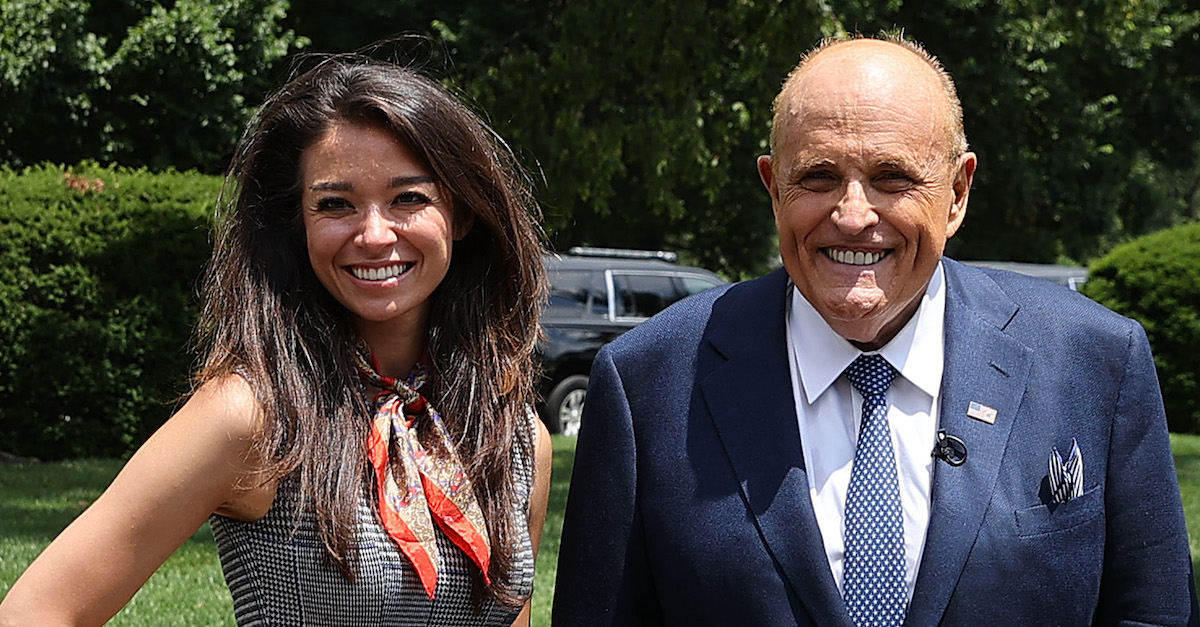 A federal judge on Wednesday agreed to dismiss a lawsuit filed by two Georgia election workers against the company which owns the One America News (OAN) Network, several of the network’s executives, and correspondent Chanel Rion. The judge, however, agreed to keep the case alive against one defendant: Rudy Giuliani.

The dismissal with prejudice was not a surprise, as it was directly requested by the plaintiffs and agreed to by the defendants pursuant to a settlement agreement that has been in the works for weeks. A status report dated April 21 said that the parties held “a successful one-day mediation on April 19, 2022” and on that date “agreed upon and signed a binding set of settlement terms.”

The complete paperwork was drawn up and signed in a predictable fashion shortly thereafter.

The May 10 filing makes clear that Giuliani “is not a party to the Settlement Agreement, and Plaintiffs wish to continue prosecuting their claims against Defendant Giuliani.”

Plaintiffs Ruby Freeman and Wandrea “Shaye” Moss, both of Georgia, alleged last December that the defendants all bore “responsibility” for a spat of “partisan character assassination” that resulted from the 2020 presidential election. Freeman was a “temporary election worker,” while Moss “supervised Fulton County’s absentee ballot operation during the 2020 general election,” the original lawsuit paperwork indicated.

“Defendants have engaged in a concerted effort to accuse Ms. Freeman and Ms. Moss, by name, of committing ballot fraud in order to alter the outcome of the 2020 presidential election in Georgia,” the lawsuit argued when it was filed. “Defendants worked together to publish false statements accusing Ms. Freeman and Ms. Moss of committing election fraud.”

On December 3, 2020, the Trump campaign published an edited video from a grainy security camera that showed unidentified persons (including individuals later identified as Ms. Freeman and Ms. Moss) counting ballots. The Trump campaign and Giuliani used that video to fabricate the lies that Ms. Freeman and Ms. Moss were illegally counting ballots. Giuliani amplified the video by posting about it on social media and directing his followers to watch it multiple times over the next two days. OAN, its hosts, and its staff leveraged Giuliani’s unsupported factual assertions and almost immediately published them to millions of its viewers and readers, subsequently adding Ms. Freeman’s and Ms. Moss’s names and leveling additional accusations of criminal fraud against them.

The lawsuit then said that those and other claims of election malfeasance were “definitively debunked” several times over again:

Within 24 hours of Giuliani and the Trump campaign’s original publication of these lies on December 3, 2020, Georgia election officials publicly and definitively debunked the claims about Ms. Freeman and Ms. Moss through a detailed explanation of what the misinterpreted video did not show: no suitcases; no illegal ballot counting; no election fraud. A full hand recount of Georgia’s election results had already confirmed the election results, and by December 7, so would the recount requested by the Trump campaign. Through December and January, Georgia’s Republican election officials continued to explain to the public, again and again, that thorough reviews had disproven Defendants’ false claims and proven that no illegal ballot counting had occurred.

The lawsuit alleged defamation per se (because, it argued, the defendants accused the plaintiffs of committing criminal conduct), intentional infliction of emotional distress, civil conspiracy, and aiding and abetting.

The formal dismissal this week occurred shortly after OAN broadcast what an anchor described as an “updated report from Georgia officials.” It said, verbatim:

Georgia officials have concluded that there was no widespread voter fraud by election workers who counted ballots at the State Farm Arena in November 2020. The results of this investigation indicate that Ruby Freeman and Wandrea ‘Shaye’ Moss did not engage in ballot fraud or criminal misconduct while working at State Farm Arena on election night. A legal matter with this network and the two election workers has been resolved to the mutual satisfaction of the parties through a fair and reasonable settlement.

OAN tweeted out a video of the report:

In a statement to Reuters, Michael Gottlieb, a lawyer for the plaintiffs, also echoed that the settlement was “fair and reasonable.”

An amended complaint naming Giuliani as the sole defendant was filed in federal court on May 10. Borrowing from the language of the original lawsuit, the complaint alleges as follows:

Defendant Rudy Giuliani bears substantial and outsized responsibility for the campaign of partisan character assassination of Ms. Freeman and Ms. Moss. He orchestrated a sustained smear campaign, repeatedly accusing Ms. Freeman and Ms. Moss, by name, on television and on the Internet and social media networks of committing election fraud in order to alter the outcome of the 2020 presidential election in Georgia.

A conference report filed on April 25 suggests the following timetable for the Giuliani case: motions to dismiss are proposed as being due on June 6, motions for summary judgment should be due on March 10, 2023, and a trial date of June 5, 2023 is contemplated.

Read the dismissal documents and the amended complaint against Giuliani below: