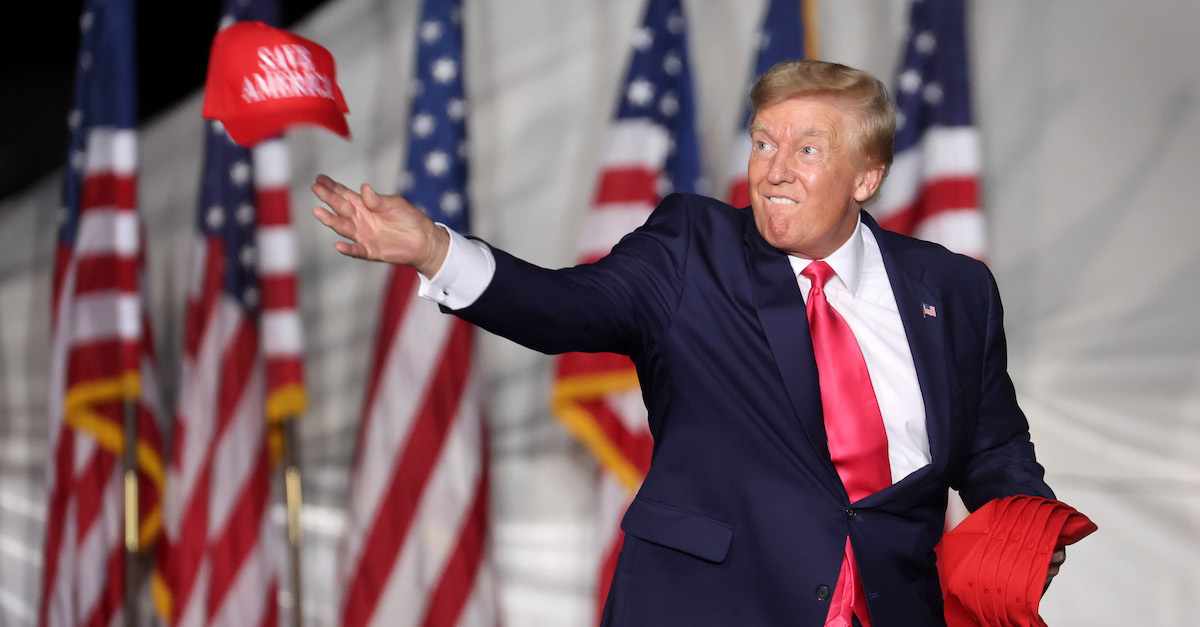 A search warrant unsealed around 3:45 p.m. on Friday reveals that federal authorities are investigating whether former President Donald Trump assembled documents at his Mar-a-Lago estate in Florida in violation of three specific federal statutes.

While the warrant (embedded below) does not accuse Trump of any crime, the document describes the “[p]roperty to be seized” as “all physical documents and records constituting evidence, contraband, fruits of crime, or other items illegally possessed in violation of 18 U.S.C. §§ 793, 2071, or 1519.”

Let’s discuss the statutes one by one.

This statute under the Espionage Act covers the “[g]athering, transmitting or losing” of “defense information.”

The warrant doesn’t facially explain which subsection of the statute may be at play, but subsection (a) involves an interesting element.

That subsection criminalizes the “obtaining information respecting the national defense” by someone with the “intent or reason to believe that the information is to be used to the injury of the United States, or to the advantage of any foreign nation.”

Subsection (d) of the statute covers an individual “lawfully having possession of, access to, control over, or being entrusted with any document.” This particular subsection criminalizes the communication, delivery, transmission of material “relating to the national defense” if the possessor of the material “has reason to believe could be used to the injury of the United States or to the advantage of any foreign nation.” Subsection (d) also criminalizes the willful retention and failure to deliver such material “on demand” to an officer or “employee of the United States entitled to receive it.”

Subsection (g) contains a conspiracy element: “[i]f two or more persons conspire to violate any of the foregoing provisions of this section, and one or more of such persons do any act to effect the object of the conspiracy, each of the parties to such conspiracy shall be subject to the punishment provided for the offense which is the object of such conspiracy.”

It reads, in full, as follows.  Note the section about forfeiting one’s office and being disqualified from future office:

(a) Whoever willfully and unlawfully conceals, removes, mutilates, obliterates, or destroys, or attempts to do so, or, with intent to do so takes and carries away any record, proceeding, map, book, paper, document, or other thing, filed or deposited with any clerk or officer of any court of the United States, or in any public office, or with any judicial or public officer of the United States, shall be fined under this title or imprisoned not more than three years, or both.

(b) Whoever, having the custody of any such record, proceeding, map, book, document, paper, or other thing, willfully and unlawfully conceals, removes, mutilates, obliterates, falsifies, or destroys the same, shall be fined under this title or imprisoned not more than three years, or both; and shall forfeit his office and be disqualified from holding any office under the United States. As used in this subsection, the term “office” does not include the office held by any person as a retired officer of the Armed Forces of the United States.

This statute involves the “[d]estruction, alteration, or falsification of records in Federal investigations and bankruptcy.”  Specifically, it involves making a “false entry” in certain records.

It is also brief; the full text is here:

Whoever knowingly alters, destroys, mutilates, conceals, covers up, falsifies, or makes a false entry in any record, document, or tangible object with the intent to impede, obstruct, or influence the investigation or proper administration of any matter within the jurisdiction of any department or agency of the United States or any case filed under title 11, or in relation to or contemplation of any such matter or case, shall be fined under this title, imprisoned not more than 20 years, or both.

The National Archives has for months been communicating with Trump echelons about documents which it expected to receive under the Presidential Records Act.

On Feb. 7, the Archives released the following:

In mid-January 2022, NARA arranged for the transport from the Trump Mar-a-Lago property in Florida to the National Archives of 15 boxes that contained Presidential records, following discussions with President Trump’s representatives in 2021. Former President Trump’s representatives have informed NARA that they are continuing to search for additional Presidential records that belong to the National Archives.

As required by the Presidential Records Act (PRA), these records should have been transferred to NARA from the White House at the end of the Trump Administration in January 2021.

On Feb. 8, the Archives released a follow-up:

Throughout the course of the last year, NARA obtained the cooperation of Trump representatives to locate Presidential records that had not been transferred to the National Archives at the end of the Trump administration. When a representative informed NARA in December 2021 that they had located some records, NARA arranged for them to be securely transported to Washington. NARA officials did not visit or “raid” the Mar-a-Lago property.

Several commentators were swift to note that none of the statutes contain the word “classified.”

WSJ: “Mr. Trump’s lawyers argue that the former president used his authority to declassify the material before he left office.”

But as @charlie_savage points out. NONE of the 3 crimes cited in the warrant turn on whether the information is classified.https://t.co/xcGr2LotPD pic.twitter.com/vmsbp1vD3z

However, national security attorney Bradley P. Moss told Law&Crime in a separate report that while the Espionage Act predates the modern regime of classified documents, he was “not aware of the government ever prosecuting someone for unauthorized removal or handling of information that relates to the national defense that is not also classified.”

Myriad cases discuss the Espionage Act subsection cited in the warrant.  Most deal with the direct transmittal of documents or photographs to a foreign government or to members of the press.

One high-profile case from the mid-2000s reveals how the first statute referenced above can pose a slippery slope for prosecutors.  Co-defendants Steven Rosen and Keith Weissman, described by the New York Times as “pro-Israel lobbyists,” were prosecuted under 18 U.S.C. § 793.

The case was characterized several ways while it was active.

According to a federal judge’s opinion which examined the sufficiency of the indictment, Rosen was alleged to have “told an unnamed foreign official” that he “picked up an extremely sensitive piece of intelligence” — one which he allegedly characterized as “codeword protected.” Rosen then “proceeded to relate this piece of intelligence, which concerned terrorist activities in Central Asia, to the foreign official.”  Weissman allegedly communicated to the “same foreign official” that he had a “classified FBI report” about the Khobar Towers bombing.  Contacts with the media by Rosen were also alleged.

The New York Times described the case as an “unusual” attempt to prosecute the men for “providing to their colleagues, journalists and Israeli diplomats sensitive information they had acquired by speaking with American policy makers.”

In other words, the case was about leaks.

The defendants attacked the constitutionality of the statute in question as it was applied to them, but U.S. District Court Judge T. S. Ellis III, a Reagan appointee, said the indictment was proper.

Ellis held that the “national defense” requirement of § 793(g) applied only “to matters closely held by the government for the legitimate reason that their disclosure could threaten our collective security.”  He also held that the statute “impose[d] rigorous scienter [read:  knowledge] requirements as a condition for finding criminal liability.”

The case allowed Judge Ellis to wax a bit about — and to criticize — the statute in question:

Indeed, the basic terms and structure of this statute have remained largely unchanged since the administration of William Howard Taft. The intervening years have witnessed dramatic changes in the position of the United States in world affairs and the nature of threats to our national security. The increasing importance of the United States in world affairs has caused a significant increase in the size and complexity of the United States’ military and foreign policy establishments, and in the importance of our nation’s foreign policy decision making. Finally, in the nearly one hundred years since the passage of the Defense Secrets Act mankind has made great technological advances affecting not only the nature and potential devastation of modern warfare, but also the very nature of information and communication. These changes should suggest to even the most casual observer that the time is ripe for Congress to engage in a thorough review and revision of these provisions to ensure that they reflect both these changes, and contemporary views about the appropriate balance between our nation’s security and our citizens’ ability to engage in public debate about the United States’ conduct in the society of nations.

Despite issuing a decision that would have allowed the case to plod forward, Ellis also required prosecutors to clear several other high hurdles.  Prosecutors eventually dropped the charges, in part because the judge ruled that a public trial would have forced the government to reveal some of the alleged secret material in open court.

The Times said the case resulted in a high-profile push-pull between the FBI and the DOJ, with the FBI pleading for prosecutors to keep the case alive:

Some lawyers at the Justice Department had always had significant reservations about the case, some current and former officials said. They believed that Mr. Rosen and Mr. Weissman had acted imprudently, but doubted that either man should be criminally prosecuted. Nevertheless, F.B.I. agents poured substantial resources into the case, and the decision to seek a dismissal infuriated many within the law enforcement agency.

Daniel Ellsberg, of the famous Pentagon Papers, was also prosecuted under § 793.  A judge ordered Ellsberg acquitted, the New York Times reported in 1973, for providing a secret Vietnam War study to the press.

A copy of the Trump warrant is here:

This report has been updated since its initial publication to contain additional illustrations from case law.