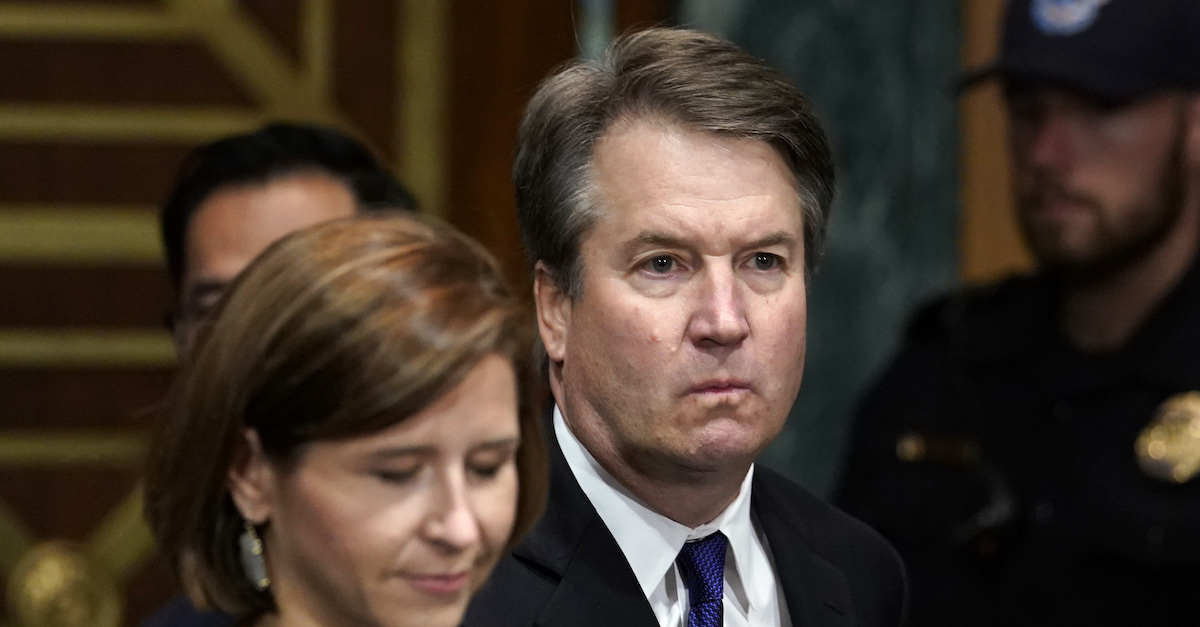 Brett Kavanaugh appeared at a confirmation hearing on September 27, 2018 in Washington, DC.

The man accused of targeting Justice Brett Kavanaugh this week but who called 911 to stop his own alleged plot admitted he needed “psychiatric help” and had “been hospitalized multiple times.” That’s according to recordings of the call released on Thursday.

Federal prosecutors alleged in charging documents that Roske approached Kavanaugh’s house with a pistol, a tactical knife, tactical gear, and pepper spray, among other things, with plans to enter it and to kill the conservative Supreme Court justice. However, Roske stopped and called 911 before he reached the Kavanaugh home in Maryland.

Those 911 calls have now been released to the public.

“I am having — thoughts,” the caller said in one of the recordings.

At one point, a dispatcher asked Roske to spell his last name for the law enforcement record.

Roske reportedly hung up, but when an 911 operator called back, Roske continued.

“I’ve been having them for a long time,” Roske said. “I’m from California. I came over here to act on them.”

The call continued with this question and answer session:

DISPATCHER: “Are you thinking of hurting anyone, including yourself?”

ROSKE: It’s — it’s in a — in a suitcase. It’s a black suitcase. Um, it’s — I’m standing near it, but the suitcase is zip tied shut from — I just came from the airport.

DISPATCHER: I need to get your description, what (unintelligible).

DISPATCHER: You mentioned a suitcase. Are you carrying a suitcase? Do you have any other items you’re carrying?

ROSKE: There’s a, um, there’s a, um, backpack, but the backpack just has jackets and random stuff in it. No weapons in there.

DISPATCHER: Have you been using alcohol or drugs today?

DISPATCHER: Do you need medical attention?

ROSKE: I need — I need psychiatric help. But no, I’m not injured, if that’s what you’re asking.

DISPATCHER: Make sure you keep your hands visible at all times. Make sure you follow your commands when they come out and speak with you. They’re going to be dispatched as soon as possible.

Roske said he was alone and was on foot and was “standing in front of the house on the sidewalk.”

“I’m on the other side of the street from where I left the suitcase,” Roske continued. “I can move it further away from myself if that’s advisable.”

“There are other weapons in the suitcase but I do not have any in my possession,” Roske said.

When asked to elaborate, Roske listed “pepper spray,” a “knife,” and “various tools.”

Then Roske named the justice. Here’s that exchange, verbatim:

DISPATCHER: “And you said you came from California. Do you know someone down here?”

DISPATCHER: Okay. And you came (inaudible).

DISPATCHER: Okay. And what were you, uh, coming to do? Just to hurt yourself and him, or what was going to happen?

The conversation then turned to how Roske found Kavanaugh’s address.

“I’m not sure how I found the street, but there’s a, there’s a, um, a whatever, an article that has a picture of the front of his house on it, and it has the street number,” Roske said. “And then I cross referenced it with — okay.”

Some of the conversation is choppy, but Roske explained that he located the Kavanaugh home via a picture in the “press” which showed the exterior of the manse during recent protests. Images of the justice’s personal dwelling spread widely during mid-May pro-choice marches in both Kavanaugh’s neighborhood and on the streets occupied by several other justices. Though federal statutes say the demonstrations were nominally illegal, there is some wiggle room in the adjacent case law, and no one appears to have been arrested or prosecuted for engaging in the so-called “walk-bys.”

Roske confirmed that he planned to hurt or kill himself as well. The phone call either cut out for a second or was redacted in the publicly available recording, but federal court records separately say Roske planned to kill himself.

“I didn’t think I could get away with it,” Roske explained when asked to describe his desire to hurt himself. “And, also, I’ve been, for a long time, I’ve been hospitalized multiple times.”

Roske said he could hear police sirens. The dispatcher said the police were “coming to help.”

The dispatcher asked Roske to confirm that he’d “thought about this before.” Roske confirmed that he had.

Roske also said he had been “diagnosed” with something, but again, the phone call either dropped out or was redacted when he began to explain himself.

Roske confirmed that he lived with his parents in California; he said they did not know what he was doing. He also confirmed that he did not have any children but said he had a dog at home — a cockapoo named Molly.

The dispatcher engaged Roske in a brief discussion about the dog before law enforcement arrived. Roske said he was going to hang up to speak with the responding officer, who he said had stopped in the middle of the street.