‘So Much Evidence Will Need to Be Reviewed’: Trump Lawyers Ask Judge to Push Back Trial Date in Hillary Clinton RICO Lawsuit 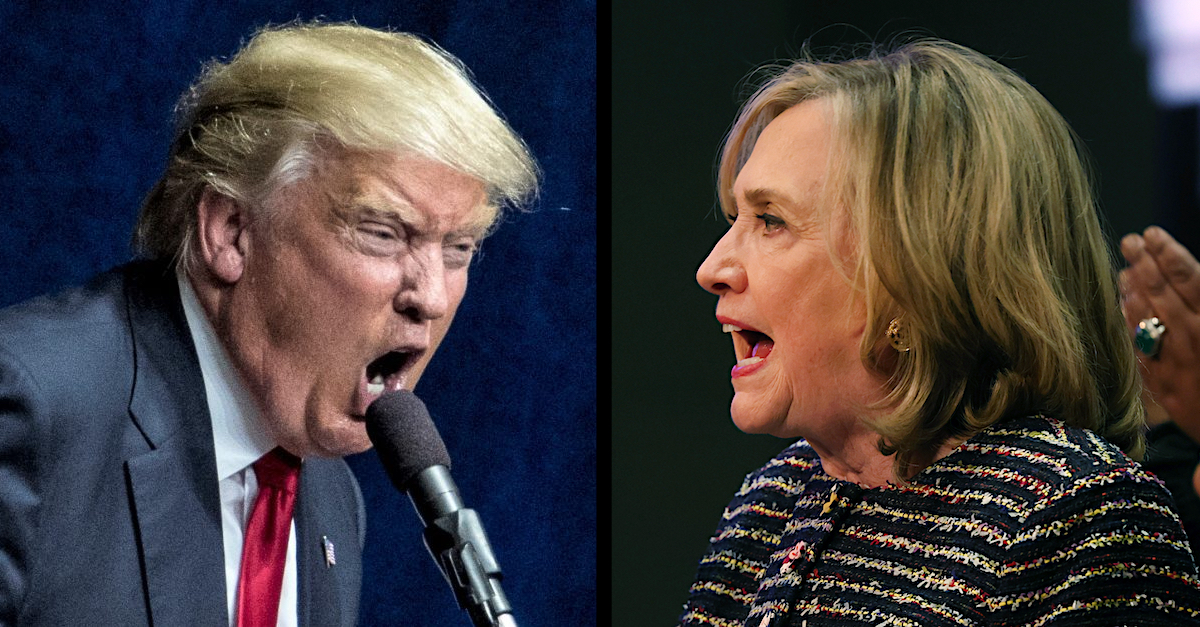 Donald Trump was captured in a bombastic pose on April 6, 2016, in Bethpage, N.Y. Hillary Rodham Clinton was seen at the National Action Network’s annual convention in Manhattan on April 7, 2022.

Attorneys for Donald Trump on Thursday asked a federal judge to push back a scheduled trial date for a sprawling RICO lawsuit against Hillary Clinton and a gaggle of others, including the Democratic Party. A “Motion to Extend Trial Date and to Enter Scheduling Order” says the planned May 8, 2023 trial should be rescheduled to November 2023 because of the voluminous evidence in the matter.

The delay request seeks to push the case back six months.

“This is a complex case, simply as so much evidence will need to be reviewed,” wrote Trump attorney Peter Ticktin. “Due to the multitude of Defendants in the action, and various complexities of the case, the Plaintiff would request that the Trial Date be pushed back 6 months, which is a reasonable amount of time based on the amount of anticipated discovery and motion practice, that will occur.”

“Furthermore, there are two defendants in England who have not yet been served due to the constraints of the Hague Convention, and there are five former federal employees who are not required to file an Answer or Response to the Complaint until September 6, 2022,” Ticktin added. “Moreover, as the Court has not yet issued a Scheduling Order, pursuant to Rule 16, and the parties have been unable to begin the discovery process, including, but not limited to, taking depositions, and conducting writing discovery. Due to the voluminous amount of anticipated discovery in this case, with the trial being ten months away, the parties will need additional time to properly litigate the case, and to prepare their respective cases.”

Clinton attorney David Kendall objected to moving the trial date during a previous meet-and-confer among more than 41 separate attorneys currently on the case, the document asserts. Kendall’s rationale, per the Trump filing, is that several of the defendants wish to have a ruling on the record as to the defendants’ various motions to dismiss the matter outright before haggling over a trial date.

Trump’s legal team in turn complained about a lack of easy access to discovery.

“In the event that Mr. Kendall should have his way, there will be extremely little time, if any, for discovery,” Ticktin wrote. “It would be nothing less than a denial of due process.”

Ticktin then complained of “[e]xceptional circumstances,” the “complexities of the case,” the “amount of parties involved in the litigation, and the amount of anticipated discovery” before wrapping up the request to punt the trial until later in 2023.

Ticktin’s affidavit lays out the core allegations of the case that have been previously alleged via an initial complaint and an amended complaint.

Ticktin wrote that he “assisted in filing a lawsuit against 29 Defendants, who as alleged in the Plaintiff’s Complaint, conspired to spread a false lie to the American people, and the rest of the world, that the Plaintiff had colluded with Russia, as well as its President Vladimir Putin, in the run-up to the 2016 election.”

The affidavit asserts that the current two-week trial should actually be scheduled to last 45 days “due to the large number of defendants, witnesses to be called, and documents to be presented as evidence.”

Ticktin said his client has “lost close to 4 months of time” for discovery: “it took time to get the Defendants all served, and the Plaintiff amended his complaint, in June, 2022, making the Complaint 185 pages, and adding additional facts and parties.”

Clinton’s attorneys moved to dismiss both Trump’s original lawsuit and amended complaint by raising the statute of limitations as a complete bar to recovery on most or all of the allegations. Generally, most federal claims must survive a statute of limitations of four or five years; Trump’s lawsuit deals with conduct which surrounded the 2016 election — more than five and a half years ago. Elsewhere, Clinton’s attorneys wrote that Trump’s many claims fail on the merits and that Trump’s “factual allegations as to individual defendants are insufficient.”

The smattering of Thursday filings are below: