Donald Trump Did Not ‘Fail’ to Act During Fateful 187-Minute Span on Jan. 6 — He ‘Chose’ Not to, Committee Says 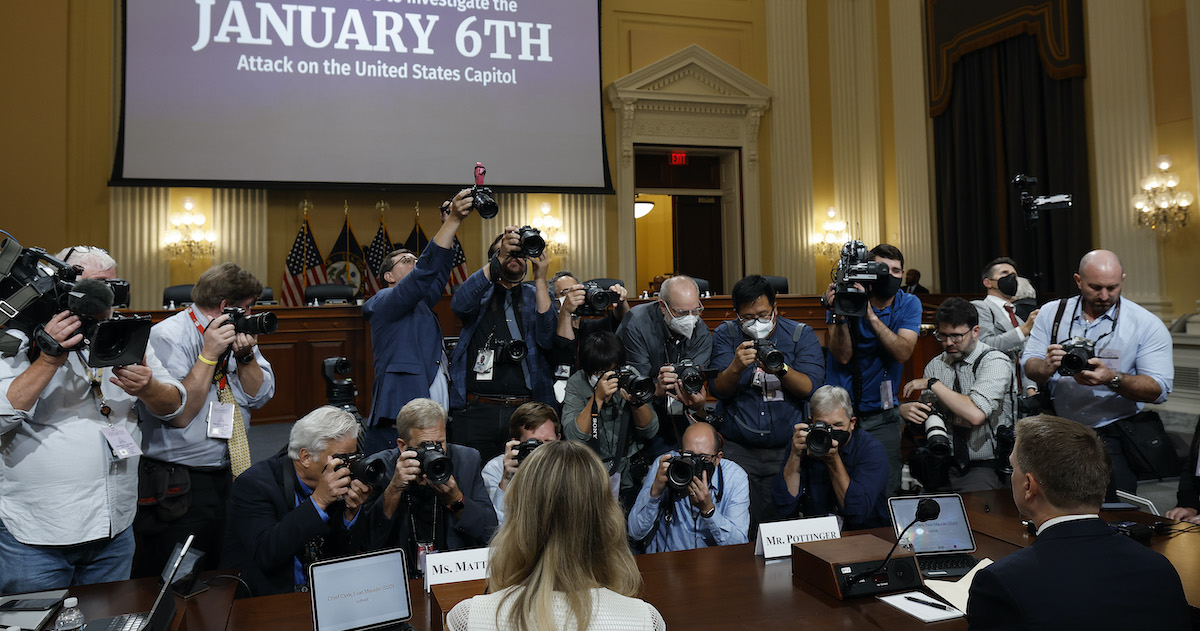 Former President Donald Trump spent the little more than three hours between the end of his Ellipse speech and his video telling rioters to go home watching TV, making a conscious decision not to intervene as his supporters laid siege to the U.S. Capitol for 187 minutes, the Jan. 6 Committee said on Thursday.

“For hours, Donald Trump chose not to answer the pleas from Congress, from his own party and from across the nation, to do what his oath required,” the committee’s Vice Chair Liz Cheney (R-Wyo.) said. “He refused to defend our nation and our Constitution. He refused to do what every president must.”

After Cheney’s introductory remarks, Rep. Elaine Luria (D-Va.) — referring to her service for two decades as a officer for the U.S. Navy — echoed the vice chair’s statements by emphasizing the oath of office, noting that every president “swears or affirms” to faithfully execute the laws of the United States and defend its Constitution.

Rep. Adam Kinzinger (R-Ill.), touting his own military background in the U.S. Air Force, went further, saying that Trump’s lack of action was not due to inertia.

“President Trump did not fail to act during the 187 minutes between leaving the Ellipse and telling the mob to go home,” Kinzinger said. “He chose not to act.”

The committee’s witnesses are former deputy White House press secretary Sarah Matthews and former deputy national security adviser Matthew Pottinger. Matthews testified that Trump could have delivered remarks in the White House briefing room by walking for “less than 60 seconds,” but he did not.

A national security official told the committee anonymously that the White House was aware of multiple reports of weapons in the crowd that morning.

“The President wanted to lead 10,000 people to the Capitol,” the security official said. “I think that was enough for anyone to be alarmed.”

Trump sat in the dining room and watched Fox News Channel for more than 2.5 hours, according to the committee.

Though the White House call log from this period of time was “empty,” Luria said, the committee knows that Trump spoke to his lawyer Rudy Giuliani from the former mayor’s call logs. At 1:49 p.m. Eastern Time, a riot was declared and Trump chose that moment to tweet out his Ellipse speech, the congresswoman said.

Trump tweeted again at 2:24 p.m. Eastern Time — this time, attacking his vice president Mike Pence — as those close to him said they grew worried.

“The staff repeatedly came into the room to see him and plead that he make a strong public statement condemning the violence and instructing the mob to leave the Capitol,” Kinzinger said, showing a clip of ex-White House counsel Pat Cipillone testifying to just that.

Cipillone declined to detail the specifics of the conversation, citing privilege.

But Cassidy Hutchinson, an ex-top aide to Trump’s chief of staff Mark Meadows, provided the details.

Pottinger said that Trump’s tweet attacking Pence at that moment prompted him to resign, leaving him “quite disturbed” at seeing “fuel being poured on the fire.” Matthews says that she chose to resign too, calling Trump’s actions that day “indefensible.”

According to the committee, Trump’s supporters also knew about the impact of his words, including one of the rally organizers Ali Alexander.

“He’s got to condem[n] this shit. Asap,” the younger Trump texted Meadows. “The captiol [sic] police tweet is not enough.”

“I am pushing it hard,” Meadows replied. “I agree.”

“This his [sic] one you go to the mattresses on,” Trump Jr. responded. “They will try to fuck his entirely legacy on this if it gets worse.”

In a video deposition, Trump Jr. explained that “go to the mattresses” was a Godfather reference. Though the eighth public hearing closes the first tranche, committee Chairman Bennie Thompson (D-Miss.) and Cheney announced that others will follow in September.