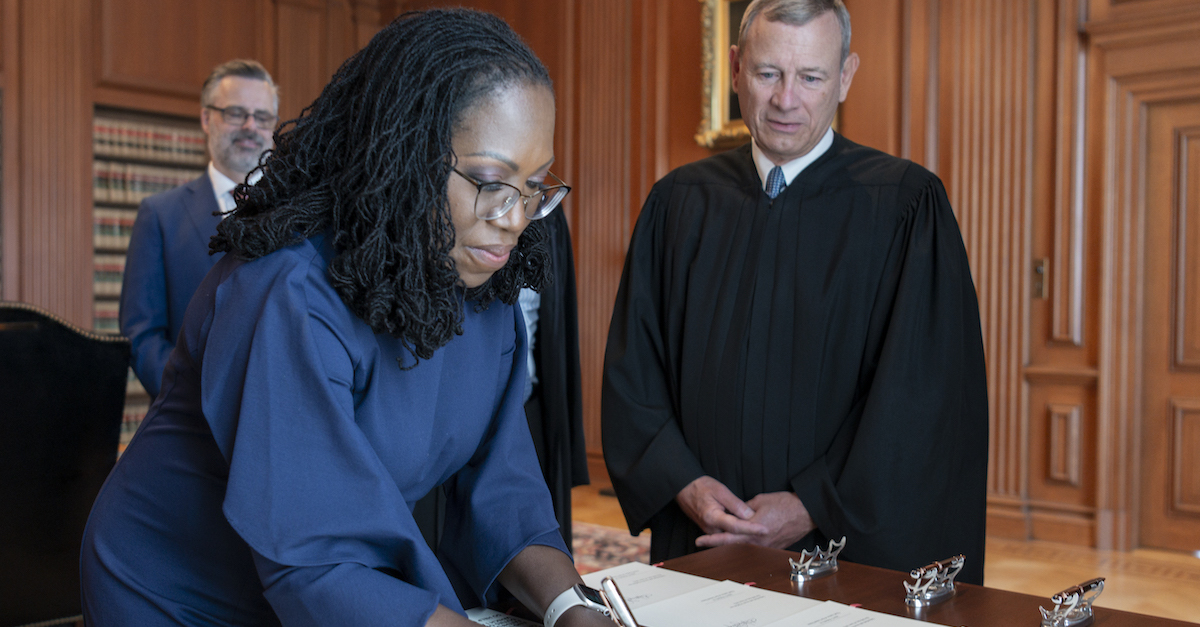 In her first official action, Justice Ketanji Brown Jackson and every other woman on the Supreme Court bench sided against the court’s ruling on Thursday denying a stay of an order preventing the Biden administration from implementing its new immigration enforcement guidelines. The justices voted 5-4 in the court’s first-ever split along gender lines to allow a conservative district judge’s order to remain in place, pending full litigation of the matter.

As Vox‘s Ian Millhiser put it, the issue in the case is one for which, “Anyone with even a passing familiarity with federal immigration law will be baffled that this issue required litigation, much less that it needs to be resolved by the Supreme Court.” Indeed, the underlying facts seem to present an unusual test of executive authority in the arena of immigration.

Early in President Joe Biden‘s term as president, the directors of  U.S. Department of Homeland Security and ICE issued memos that established a return to the immigration enforcement priorities of the Obama administration. Specifically, government agents were to prioritize the deportation of immigrants who posed safety or national security threats and those who were convicted of certain felony and gang-related offenses.

However, U.S. District Judge Drew B. Tipton, appointed by then-President Donald Trump in 2020, issued an order in 2021 enjoining the DHS and ICE directors from enforcing their memos. Without the specified priorities in place, ICE agents were essentially left to their own judgment to determine their own enforcement priorities.

Law&Crime’s Colin Kalmbacher quoted immigration lawyers hammering Tipton’s “unprecedented and outrageous” ruling at length when it was first handed down.

In July 2022, the Biden administration asked the Supreme Court to stay Tipton’s decision while the case proceeded through an appeal to the high court. The high court denied the stay, granted certiorari, and directed the parties to brief the case in preparation for oral arguments in December 2022. Justices Sonia Sotomayor, Elena Kagan, and Amy Coney Barrett joined Jackson in an official statement that they would have voted in favor of a stay of Tipton’s order. 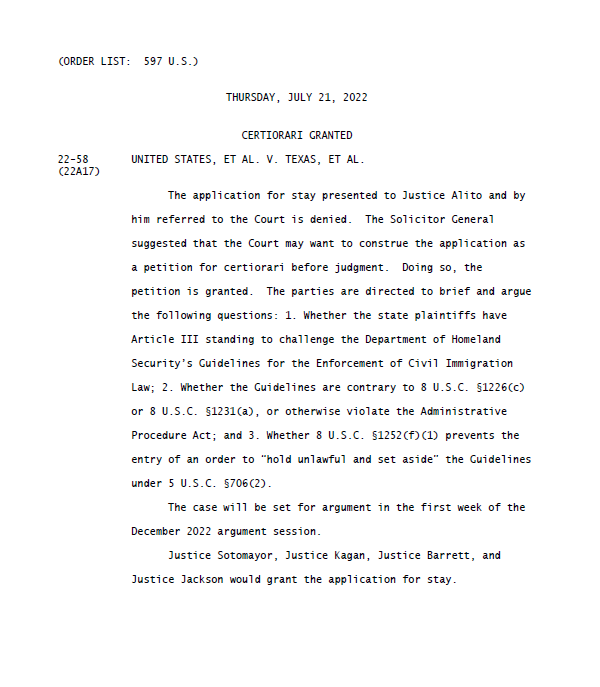 Attorneys and legal commentators reacted immediately to the court’s ruling. In a tweet, attorney Mark Joseph Stern of Slate called the ruling “pretty distressing,” and remarked that, “The majority has once again allowed a single federal judge to seize control over a major chunk of immigration policy.”

It’s pretty distressing that the Supreme Court did not grant a stay in this case. The majority has once again allowed a single federal judge to seize control over a major chunk of immigration policy. As cynical as I am about SCOTUS, I really thought this would go the other way.

Absolutely nonsensical. Every presidential administration in history has had immigration enforcement priorities. When Congress created DHS in 2003 it legally mandated that the DHS secretary set such priorities. Now a 5-4 SCOTUS has let a single judge in Texas overrule Mayorkas. https://t.co/fjndL5dyN9