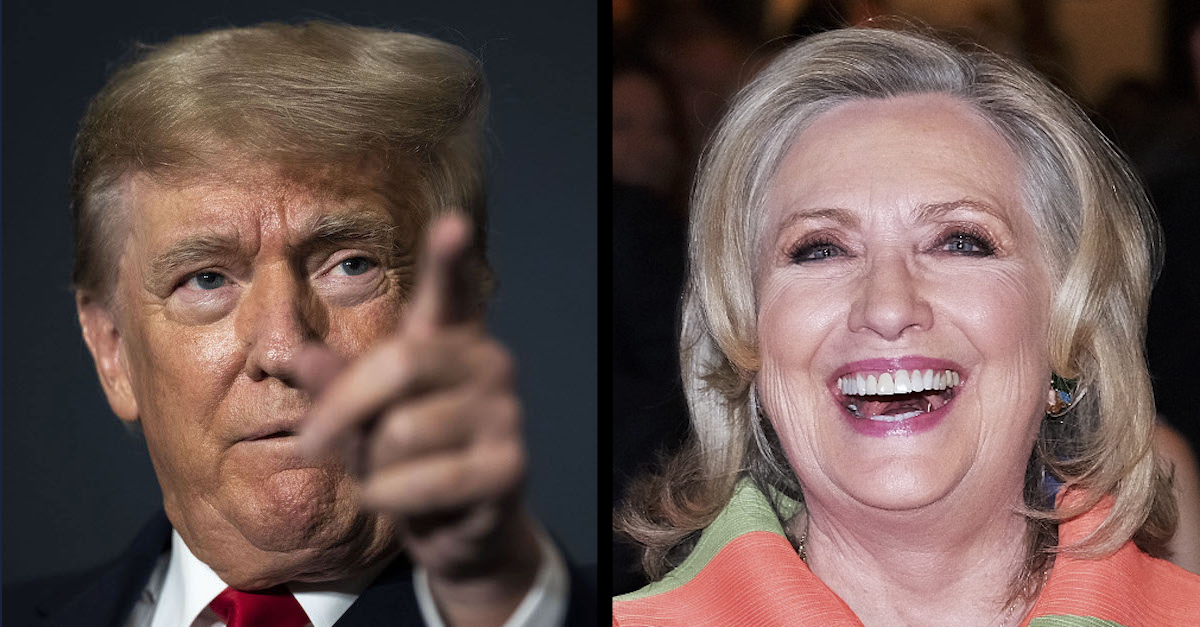 Attorneys for former President Donald Trump are pushing back against a demand for sanctions by a collection of defendants in Trump’s failed racketeering lawsuit against Hillary Clinton and others.

In a reply document filed Monday evening (but dated Tuesday in the docket), they defended Fox News appearances and even claimed Michael Sussmann’s acquittal was “immaterial” to their civil suit’s alleged validity — even though the civil suit was partially premised on the work of John Durham. In an interesting yet legally predictable argument, they strongly premised their attempt to avoid sanctions on a dispute over how to interpret the Supreme Court’s 1997 opinion in Paula Jones’ case involving Bill Clinton.

The Trump lawyers’ arguments this time around were more technical than they were bombastic — a shift from the tone adopted in several previous filings in the case.

The aforementioned list of defendants sought sanctions under three areas of law: (1) 28 U.S.C. § 1927; (2) the Court’s inherent power to discipline its own affairs; and (3) the Defend Trade Secrets Act, according to the reply. None were warranted, Trump’s attorneys asserted in the newly filed reply document.

“The imposition of sanctions is a drastic remedy that ‘should not be assessed lightly or without fair notice and an opportunity for a hearing on the record,'” Trump’s attorneys wrote, citing case law.

They continued by asserting that they “did not engage in unreasonable and vexatious conduct,” did not “prosecute the underlying proceedings in a frivolous or reckless manner,” and did not “conduct themselves in a manner so egregious that it is tantamount to bad faith” (internal quotations omitted).  Additionally, they claimed they filed an amended complaint “in good faith” and “with leave” from the court.

In another section of the document, Trump’s attorneys pushed back at what they believed were an “exorbitant amount of fees” sought by the defendants.

Plus, elsewhere, Trump’s attorneys asserted that — despite the dismissed nature of the case — it was “supported by existing precedent or, at a minimum, present[ed] a compelling argument for the extension of existing law.” Specifically, they said a “well-founded” argument for the “equitable tolling” of the statute of limitations was present — even though the judge disagreed.

Trump’s attorneys, who by now are also focused on a promised appeal, pressed that argument with rigor by quibbling with the defendants over how to interpret Clinton v. Jones (1997):

This argument is well-reasoned and based in Supreme Court precedent, which has consistently emphasized the all- encompassing nature of the President’s position and the need for him to devote his undivided time and attention to fulfilling his duties.

The Defendants claim that the holding in Clinton v. Jones “arrived at the opposite conclusion than that which Plaintiff urges,” but this is simply not the case. While it is true that the Clinton court found that an automatic stay of all private litigation commenced against a sitting President was not a constitutional imperative under the separation of powers doctrine, the Court noted that it “accepted the initial premise” that the “public interest demands that [the President] devote his undivided time and attention to his public duties.” Clinton, 520 U.S. at 697-699. In rejecting this “categorical rule,” the Court acknowledged that the “high respect that is owed to the office of the Chief Executive . . . is a matter that should inform the conduct of [an] entire proceeding” and stressed that “the question of whether a specific case should receive exceptional treatment is more appropriately the subject of the exercise of judicial discretion than an interpretation of the Constitution.” Id. at 706. Accordingly, the holding in Clinton firmly supports Plaintiff’s position that an equitable tolling of the statute of limitations was warranted for the duration of his presidency.

Elsewhere, Trump’s attorneys pushed back at claims of “bad faith” in the way footnotes were used to cite various alleged facts:

Specifically, Trump’s attorneys said one footnote “was merely included for the purpose of citing to the source of the quoted language” in their amended complaint. The quoted language was a reference to Hillary Clinton as “the candidate.”

Trump’s attorneys appear to claim they wanted to cite the source of the quote, not the accompanying facts surrounding the quote.  The latter included assertions that Hillary Clinton “attempted to shield her involvement” with the Russian collusion narrative “behind a wall of third parties” in the leadup to the 2016 election.  The underlying inspector general report cited in the footnote at issue does not go that far; rather, it asserts that Steele told an FBI agent that he was “aware” (or believed) that Clinton was personally aware of some of his “reporting.”

That “reporting” was subsequently debunked.

Trump sued Clinton and a broad collection of other defendants associated with the Democratic Party and the so-called “Russiagate” scandal back in March.  The case was dogged by the applicable federal statute of limitations, which expired prior to the filing of the instant action.

Trump’s attorneys unsuccessfully argued that the usual time bar for civil complaints should be tolled — or paused — during Trump’s entire presidency; that argument asserted that Trump was so busy being president that he couldn’t be bothered to press his RICO case. Judge Middlebrooks disagreed and noted that Trump had plenty of time to litigate the matter while he was president.  But the argument is one that may turn at least some judicial heads at the appellate level.

Additionally, Judge Middlebrooks agreed that the U.S. Government should be substituted as a defendant instead of several named individuals, including James Comey, Andrew McCabe, Lisa Page, and Peter Strzok, because they were being sued for acts undertaken as part of their jobs. Adam Schiff and Rod Rosenstein were removed and substituted for similar reasons.

Eventually, Judge Middlebrooks rubbished the entire litigation in spectacular fashion — in essence agreeing that the ex-president could not turn his political vendettas into an actionable federal civil lawsuit.

In an attempt to avoid sanctions, Trump’s attorneys said many of their claims were lifted from Special Counsel Durham’s separate and previous criminal case against Igor Danchenko. However, eventually, a separate federal judge threw out the charge against Danchenko that became a wellspring for Trump’s RICO lawsuit, and Danchenko was acquitted on all other counts.

When defending against the inclusion of many of Durham’s accusations — including that Michael Sussmann had lied to the FBI — Trump’s attorneys said in the reply that Sussmann’s acquittal was “immaterial” to the points they were trying to raise in the RICO civil suit.

“Thus, contrary to Defendants’ assertion, Plaintiff Counsel’s use of the Sussmann trial was indeed in good faith and intended to substantiate the veracity of the allegations contained in the Amended Complaint and not intended to mislead in any way,” Trump’s attorneys wrote.

“To the extent these statements are relevant to the instant application at all, they simply demonstrate that Ms. Habba is a zealous advocate for her client, that she staunchly believes in the viability of the underlying claims, and that she has extensively familiarity with the relevant evidence,” the reply brief continues. “The statements made by Ms. Habba are indicative of an attorney prosecuting an action, in good faith, and nothing more.”

The filing then balks at claims of “gamesmanship” by reminding the Court that Trump’s attorneys agreed to delay requests by the various defendants.

It concludes by asserting common arguments against the way the defenants’ attorneys calculated their hours and says the amount of sanctions contemplated is unreasonable.

The full filing is available here.