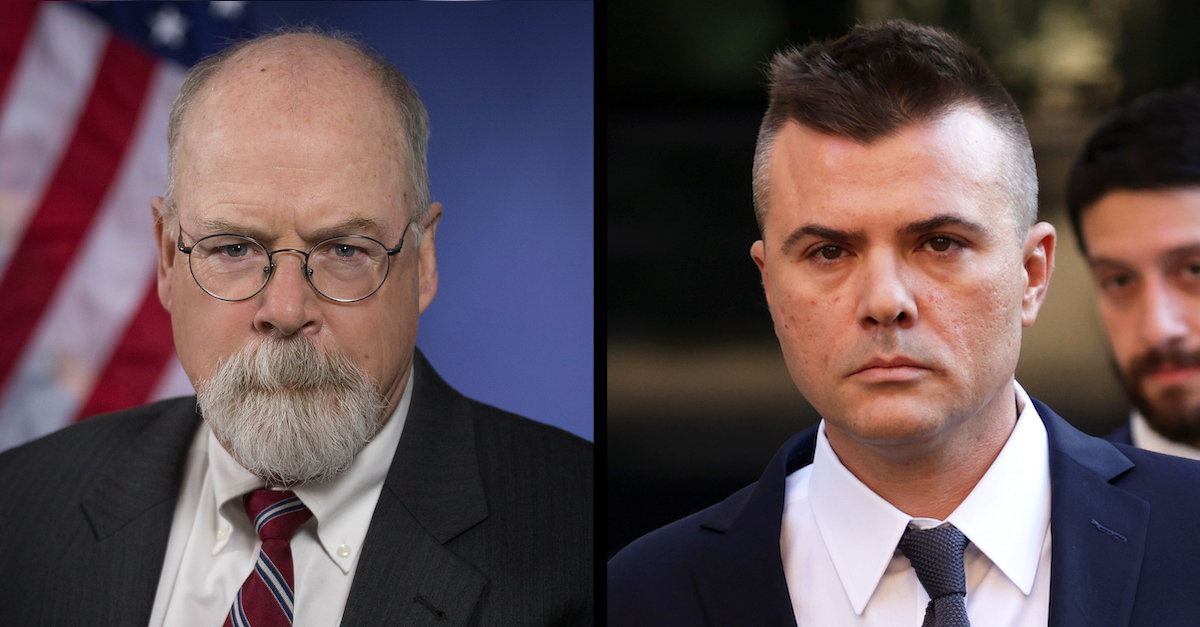 A Washington, D.C. jury on Tuesday acquitted analyst Igor Danchenko of lying to the FBI.

The prosecution was the last of three cases launched by John Durham, who was appointed to uncover the genesis of the government’s probe into the since-debunked theory that Donald Trump colluded with Russia in the lead-up to the 2016 election. The theory led to a probe by Special Counsel Robert Mueller. The goal of Durham’s subsequent probe was, in essence, to investigate the investigation.

Danchenko was accused of five counts of lying to the FBI regarding his sources for claims that eventually made it into the “Steele Dossier.” That dossier, by former British intelligence operative Christopher Steele, contained lurid claims that incorrectly tied Trump to Russian collusion.

A judge rubbished one of the five counts before it even made it to the jury.  That count, involving Danchenko’s discussions with public relations executive Charles Halliday Dolan Jr., served as a crutch for Donald Trump’s racketeering lawsuit against Hillary Clinton. Trump’s attorneys called the case against Danchenko “a large-scale, years-long investigation by a highly-qualified federal agency . . . that wields immense investigatory authority has access to state-of-the-art resources in carrying out its investigations.”

A jury apparently did not agree with those sentiments, and a judge threw Trump’s civil RICO case against Clinton, Dolan, and others out of court. Trump’s lawyers have promised an appeal.

The reason the judge scuttled the count involving Dolan is because it alleged that Danchenko lied when the FBI asked him if he had “talked to Dolan about the dossier.”

The evidence at trial indicated that Dolan had provided an email to Danchenko that did make it into the now-infamous and debunked dossier.

Research for the now-infamous Steele dossier was funded in part by Hillary Clinton’s 2016 presidential campaign and by the Democratic National Committee. The conservative Free Beacon funded the firm behind the document: Fusion GPS.

According to the New York Times, Durham’s attorneys argued that Danchenko, who was born in Russia, lied to the FBI and that his lies had a material effect on the dossier — which the FBI in turn “cited to bolster applications to wiretap a former Trump campaign adviser with ties to Russia.”

“This defendant’s lies caused intensive surveillance on a U.S. citizen,” Durham prosecutor Michael Keilty said during closing arguments, according to the Times.

Durham himself reportedly argued — apparently in vain — that “the whole house of cards of the dossier crumbles” based on the evidence adduced at trial.

Defense attorney Stuart Sears reportedly asserted that Durham’s evidence proved Danchenko did not lie.  According to the Times, Sears argued that Danchenko, who worked for Steele’s company for a time, became “embroiled in a politically charged investigation.”

Sears reportedly characterized Durham as an overzealous prosecutor who tried to prove “at any cost” that Danchenko was guilty.

The evidence at trial generally characterized Danchenko as an important informant in dozens of FBI investigations between March 2017 and October 2020, the Washington Post reported.  That newspaper said Danchenko’s assistance has from time to time been sought for information on Russia’s invasion of Ukraine.

Durham’s other prosecutions involved former Perkins Coie cybersecurity lawyer Michael Sussmann, who was also acquitted of lying to the FBI, and low-level FBI attorney Kevin Clinesmith, who pleaded guilty to altering an email and who avoided jail time.

According to his most recent expenditure reports, Durham, who was appointed by then-Attorney General William Barr, spent nearly four and a half million dollars (as of his last report) prosecuting Danchenko (who has now been acquitted), Sussmann, and Clinesmith.

Trump has long alleged that Durham would uncover proof that the “deep state” was working against him. He dubiously called the underlying facts the “crime of the century” in comments to FOX News in February.

This report, which began as a developing story, has since been updated with additional information and context.