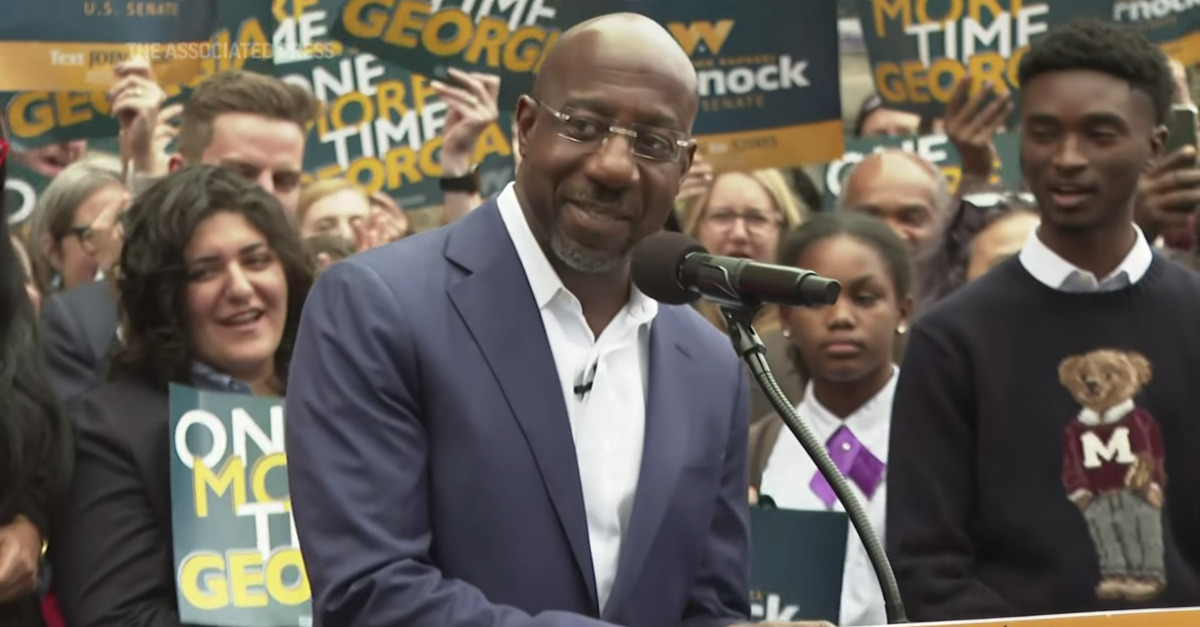 Democrats are suing the State of Georgia over GOP efforts to limit early voting in the upcoming runoff election for the U.S. Senate.

Sen. Raphael Warnock (D) is facing former football star Herschel Walker (R) in a runoff on Dec. 6, 2022 after neither candidate was able to amass 50% of the vote during the November midterm election.

At issue is the Saturday that falls on the weekend after Thanksgiving, Nov. 26, 2022. State election officials have instructed county officials that early voting cannot occur on that day because it falls “immediately” after the national day of thanks as well a state holiday which was originally dedicated to the birthday of Confederate general Robert E. Lee but was renamed “State Holiday” in 2015.

The lawsuit takes aim at Georgia’s Republican Secretary of State Brad Raffensperger, and his chief deputy Gabriel Sterling, for originally telling cable news viewers that voting on the Saturday after Thanksgiving would be allowed – before later issuing a bulletin that purports to expressly block counties from opening their polls that day.

Just last week, the State’s two highest election officers acknowledged publicly that counties may conduct early voting on November 26, the Saturday after Thanksgiving. Secretary Raffensperger appeared on national television on November 9 and stated that he “anticipate[s] that some counties may likely have Saturday voting following Thanksgiving.” That same day, his office’s Chief Operating Officer, Gabriel Sterling, appeared on a different national news network and explained that counties could open their polls to voters on the Saturday after Thanksgiving “if they so choose.

“Yet, just three days after Georgia’s chief election official made these statements—broadcast nationwide to millions of viewers, including no doubt many voters across Georgia—his office issued the November 12 Bulletin, which reversed course by instructing counties that they may not hold advance voting on November 26,” the lawsuit goes on.

Raffensperger’s office is barring early voting on the Saturday after Thanksgiving due to a statute that specifically applies to general elections and primary elections, the lawsuit argues. That section of the statute, the filing explains, distinguishes the terms “general election” from “primary” and “runoff.” The rules for runoffs, the lawsuit says, are different and in a separate part of the law.

In other words, Democrats are arguing that Raffensperger’s guidance is flawed and “unlawful” because the sentence his office relies upon to limit early voting does not actually contain the word “runoff.”

“The Secretary’s interpretation misreads § 21-2-385(d)(1) and cherry-picks provisions that have no application to runoffs,” the filing says in summary. “Section 21-2-385(d)(1)’s restrictions on Saturday voting are inextricably linked with its mandate that counties must offer early voting on the second and third Saturday before each primary or election—and those rules do not apply to runoffs, which involve a significantly more compressed advance-voting period.

Democrats also say the internal logic of Raffensperger’s guidance doesn’t make sense – if the disputed sentence does apply to runoffs.

The provision of the Peach State statute cited to limit early voting, which is technically called “advance voting,” also mandates that polls be open on the third Saturday prior to an election – which this year, for the runoff, would be this coming Saturday, Nov. 19, 2022.

“Tellingly, neither the Secretary nor the November Bulletin have instructed counties across Georgia that they must hold advance voting on that date, opting instead to cherrypick portions of the provision and apply them selectively to runoffs,” the lawsuit argues – while clarifying in a footnote that the plaintiffs do not want polls open that day or expect them to be open. “That is not how the statute operates: if the sentence’s prohibition on holding advance voting on a Saturday after a holiday applies to runoffs, so too must its command that advance voting be held on the second and third Saturday in the first place. To read the statute otherwise is nonsensical.”

Warnock’s campaign and Raffensperger heavily criticized one other in dueling comments to The Atlanta Jounal-Constitution.

“Illegal attempts to block Saturday voting are another desperate attempt by career politicians to squeeze the people out of their own democracy and to silence the voices of Georgians,” Quentin Fulks, Warnock’s campaign manager, told the paper. “We’re aggressively fighting to protect Georgia voters’ ability to vote on Saturday.”

“If recent elections prove one thing, it’s that voters expect candidates to focus on winning at the ballot box — not at the courthouse,” Raffensperger told the paper. “Sen. Warnock and his Democratic Party allies are seeking to change Georgia law right before an election based on their political preferences.”