Judge Throws Out Trump’s RICO Lawsuit Against Hillary Clinton: ‘Length, Hyperbole, and the Settling of Scores and Grievances’ Have No Legal Merit 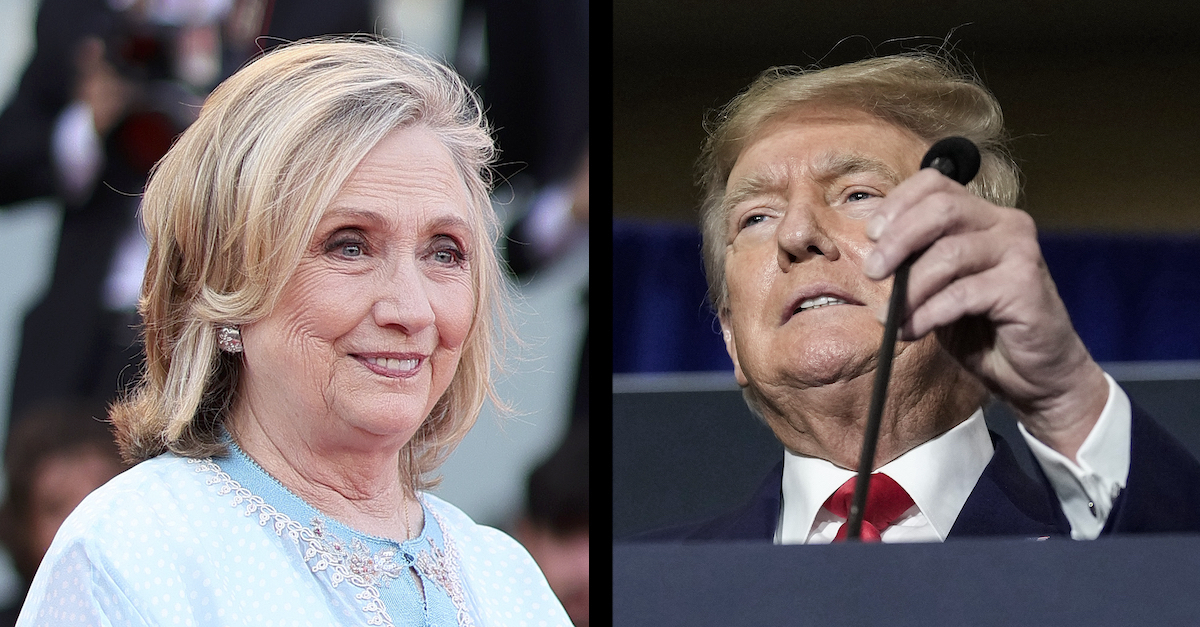 A federal judge has dismissed the sprawling archlawsuit filed by Donald Trump against his perceived political enemies during the 2016 election, including Hillary Clinton, opponents, including the Democratic National Committee, James Comey, Lisa Page, Peter Strzok, and Fusion GPS.

U.S. District Judge Donald M. Middlebrooks dismissed the case “in its entirety” after the myriad defendants asked him to rubbish the proceeding — and after Trump’s lawyers sought to keep the matter alive.

Middlebrooks agreed to do so in an eleventh-hour filing shortly before midnight on Thursday.

Trump’s lawyers argued that the various claims — racketeering, theft of trade secrets, malicious prosecution, injurious falsehood, and other alleged torts — should have moved forward despite being filed well after the statute of limitations had expired. Trump’s legal team employed a novel argument: that the statute of limitations should be “tolled,” or paused, for the entire time Trump was president. In essence, they argued that Trump was so busy being president that he could not have focused on the litigation.

The judge shot down those suggestions.

“Plaintiff’s presidency evidently did not deter him from filing other lawsuits in his personal capacity during the duration of his term in elected office,” Middlebrooks noted before citing three specific examples.

The judge was otherwise less than kind to Trump’s lawyers.

“Plaintiff’s theory of this case, set forth over 527 paragraphs in the first 118 pages of the Amended Complaint, is difficult to summarize in a concise and cohesive manner,” Middlebrooks quipped. “It was certainly not presented that way. Nevertheless, I will attempt to distill it here.”

What followed was the following distillation (we’ve omitted the citations to the case record):

The short version: Plaintiff alleges that the Defendants “[a]cting in concert . . . maliciously conspired to weave a false narrative that their Republican opponent, Donald J. Trump, was colluding with a hostile foreign sovereignty.” The Defendants effectuated this alleged conspiracy through two core efforts. “[O]n one front, Perkins Coie partner Mark Elias led an effort to produce spurious ‘opposition research’ claiming to reveal illicit ties between the Trump campaign and Russian operatives.” To that end, Defendant Hillary Clinton and her campaign, the Democratic National Committee, and lawyers for the Campaign and the Committee allegedly hired Defendant Fusion GPS to fabricate the Steele Dossier. “[O]n a separate front, Perkins Coie partner Michael Sussman headed a campaign to develop misleading evidence of a bogus ‘back channel’ connection between e-mail servers at Trump Tower and a Russian- owned bank.” Clinton and her operatives allegedly hired Defendant Rodney Joffe to exploit his access to Domain Name Systems (“DNS”) data, via Defendant Neustar, to investigate and ultimately manufacture a suspicious pattern of activity between Trump-related servers and a Russian bank with ties to Vladimir Putin, Alfa Bank. As a result of this “fraudulent evidence,” the Federal Bureau of Investigations (“FBI”) commenced “several large-scale investigations,” which were “prolonged and exacerbated by the presence of a small faction of Clinton loyalists who were well-positioned within the Department of Justice”—Defendants James Comey, Andrew McCabe, Peter Strzok, Lisa Page, Kevin Clinesmith, and Bruce Ohr. And while this was ongoing, the Defendants allegedly “seized on the opportunity to publicly malign Donald J. Trump by instigating a full-blown media frenzy.” As a result of this “multi-pronged attack,” Plaintiff claims to have amassed $24 million in damages.

Judge Middlebrooks, a Bill Clinton appointee, quickly noted that the defendants moved to dismiss the case due to the statute of limitations and because it simply lacked merit.

“Whatever the utilities of [the Amended Complaint] as a fundraising tool, a press release, or a list of political grievances, it has no merit as a lawsuit,” several of the defendants wrote in a motion to dismiss.

“I agree,” Middlebrooks responded while noting that the lawsuit suffered from “structural deficiencies,” jurisdictional problems, and was insufficient on substance.

Among the judge’s grievances was the verbose nature of the voluminous filing — “193 pages in length, with 819 numbered paragraphs” — and its naming of a collection of 14 counts, 31 defendants, and a number of “John Does” and unknown corporations as potential defendants.

“Plaintiff’s Amended Complaint is neither short nor plain, and it certainly does not establish that Plaintiff is entitled to any relief,” the judge wrote while referencing the federal rules of civil procedure that require “a short and plain statement of the claim showing that the pleader is entitled to relief.”

The takedown of Trump’s case continued:

More troubling, the claims presented in the Amended Complaint are not warranted under existing law. In fact, they are foreclosed by existing precedent, including decisions of the Supreme Court. To illustrate, I highlight here just two glaring problems with the Amended Complaint. There are many others. But these are emblematic of the audacity of Plaintiff’s legal theories and the manner in which they clearly contravene binding case law. First, the Amended Complaint’s answer to the Defendants’ Motion to Dismiss the original Complaint, wherein Defendants noted the lack of predicate RICO offenses, was to add another predicate offense—wire fraud. The Amended Complaint alleges that the Defendants “engaged in a calculated scheme to defraud the news media, law enforcement, and counterintelligence officials for the purpose of proliferating a false narrative of collusion between Trump and Russia.” (Am. Compl. ¶ 577). Not only does Plaintiff lack standing to complain about an alleged scheme to defraud the news media, but his lawyers ignore the Supreme Court’s holdings that the federal wire fraud statute prohibits only deceptive schemes to deprive the victim of money or property. It is necessary to show not only that a defendant engaged in deception, but that an object of the fraud was property. Kelly v. United States, 140 S. Ct. 1565, 1571 (2020); Cleveland v. United States, 531 U.S. 12, 26 (2000). Likewise, the Amended Complaint, like its predecessor, fails to account for the Supreme Court’s requirement that to obstruct justice there must be a nexus to a judicial or grand jury proceeding. United States v. Aquilar, 515 U.S. 593, 599 (1995); see also United States v. Friske, 640 F.3d 1288, 1291 (11th Cir. 2011).

Many of the Amended Complaint’s characterizations of events are implausible because they lack any specific allegations which might provide factual support for the conclusions reached. For instance, the contention that former FBI director James Comey, senior FBI officials, and Deputy Attorney General Rod Rosenstein “overzealously targeted” Plaintiff and conspired to harm him through appointment of special counsel are strikingly similar to the conclusory and formulaic allegations found deficient in the seminal Supreme Court case of Ashcroft v. Iqbal, 556 U.S. 662 (2009). What the Amended Complaint lacks in substance and legal support it seeks to substitute with length, hyperbole, and the settling of scores and grievances.

In other words, the novella Trump’s lawyers filed in court was both too much and not enough: it attempted to cover for its failures to allege winning legal claims by engaging in garrulous yet pointless narratives.

Middlebrooks later employed a term for this style of lawyering.

In some cases, Middlebrooks wrote, Trump’s lawyers cited material that did not back up their assertions. An example were several references to a 2019 Inspector General report about the FBI’s Crossfire Hurricane Investigation. Trump’s assertions, Middlebrooks said, twisted the meaning and the conclusion of the underlying IG report.

“Plaintiff and his lawyers are of course free to reject the conclusion of the Inspector General,” Middlebrooks wrote. “But they cannot misrepresent it in a pleading.”

And, though Trump’s lawyers heaped scorn upon former Perkins Coie cybersecurity lawyer Michael Sussmann, who was charged with lying to the FBI by Special Counsel John Durham, “nowhere does the Amended Complaint mention Mr. Sussmann’s acquittal” of those charges, Middlebrooks noted.

Elsewhere, the judge said Trump’s lawyers cited Clinton v. Jones, 520 U.S. 681 (1997) to support extending the statute of limitations, “but the Supreme Court in that case arrived at the opposite conclusion than that which Plaintiff urges,” Middlebrooks wrote: “it rejected a stay of litigation during President Clinton’s term and concluded that his engagement in civil litigation would not unduly interfere with his presidential duties.”

The judge said he had “serious doubts” about whether Trump’s lawyers properly certified that the case had legal merit.

As to jurisdiction, the judge noted that several of the defendants have no appropriate connections to Florida and, thus, cases cannot be pressed against them using the Sunshine State as a forum.

The judge’s 65-page opinion on the matter concluded by dismissing the Trump lawsuit with prejudice against the personal defendants and corporations. That means it cannot be refiled. The judge dismissed the U.S. Government without prejudice as a substituted defendant for several politicians and federal employees, including Adam Schiff.

“We vehemently disagree with the opinion issued by the Court today. Not only is it rife with erroneous applications of the law, it disregards the numerous independent governmental investigations which substantiate our claim that the defendants conspired to falsely implicate our client and undermine the 2016 Presidential election,” Trump lawyer Alina Habba said in a statement. “We will immediately move to appeal this decision.”

(Photo of Clinton by Andreas Rentz/Getty Images for Netflix; photo of Trump by Drew Angerer/Getty Images.)