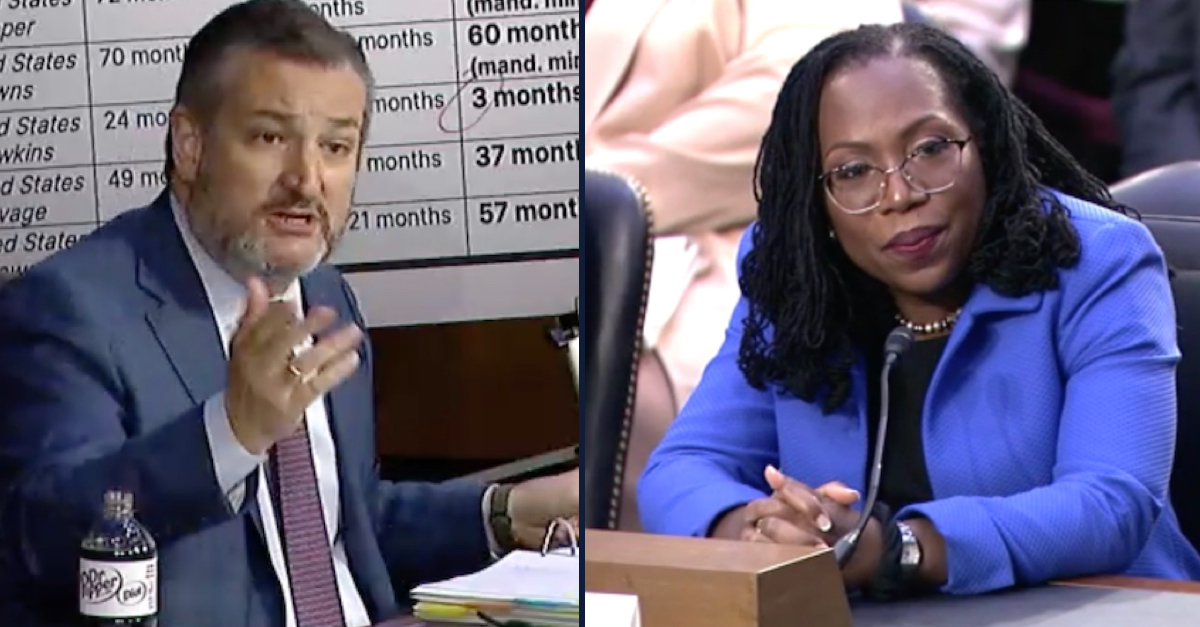 Supreme Court nominee Ketanji Brown Jackson said Wednesday that she plans on recusing herself from a pending case involving the race-based admission policies of her two-time alma mater, Harvard University.

In modern confirmation hearings, candidates tend to avoid making news by revealing how they would decide cases that they might consider. Here, Jackson drew headlines by candidly signaling what case she would not consider. The case involves a challenge to Harvard’s affirmative action policies that consider an applicant’s race as a factor in admission decisions. The plaintiffs say that Harvard’s policies set a cap on the number of Asian students who can be admitted to the school, an allegation that Harvard has denied.

The Harvard case has been consolidated with a similar case against the University of North Carolina.

Jackson, who is poised to be the first Black woman appointed to the Supreme Court, answered a question raised by Sen. Ted Cruz (R-Tex.), who was a Harvard Law student at the same time as Jackson. Jackson also attend Harvard as an undergraduate.

“Your and my alma mater, Harvard, is currently being sued for its explicit, and in my view egregious, policy of discriminating against Asian Americans,” Cruz said. “Even though I think that police is egregious, I, as an individual plaintiff, could not bring a lawsuit challenging it because I am not Asian-American, is that right?”

“If you brought a lawsuit, the court would have to evaluate whether you had an actual injury in order to be able to determine whether it had subject matter jurisdiction to hear the suit,” Jackson explained to Cruz, who is Hispanic.

During the discussion about whether Cruz, who is Hispanic, would have standing to sue over a policy that allegedly discriminates against Asian Americans, the Texas senator snuck in a question about how Jackson intends to handle the actual case that is pending before the Supreme Court.

“You are on the board of overseers of Harvard,” Cruz said. “If you are confirmed, do you intend to recuse from this lawsuit?”

“That is my plan, Senator,” Jackson said.

While Cruz may have been mollified by Jackson’s answer about the Harvard case, he appeared to have been dissatisfied with her responses to a question about gender identity and discrimination that the judge found inscrutable.

“If I can change my gender to a be a woman and an hour later I decide I am not a woman anymore, I guess I would lose Article 3 standing,” Cruz said. “Tell me, does that same principle apply to other protected characteristics? For example, I’m an Hispanic man. Could I decide I was an Asian man? Would I have the ability to be an Asian man and challenge Harvard’s discrimination because I made that decision?”

“Senator, I am not able to answer your question,” Jackson responded. “You are asking me about hypotheticals.”

“I am asking you how you would assess standing if I said I have decided to identify as an Asian man,” Cruz shot back.

“I would assess standing the way I assess other legal issues, which is to listen to the arguments made by the parties, consider the relevant precedents and constitutional principles involved, and make a determination,” Jackson said.

Cruz then pivoted to what appears to be the topic of choice of Republicans on the Senate Judiciary Committee: Jackson’s sentencing practices in cases involving child sexual assault material.