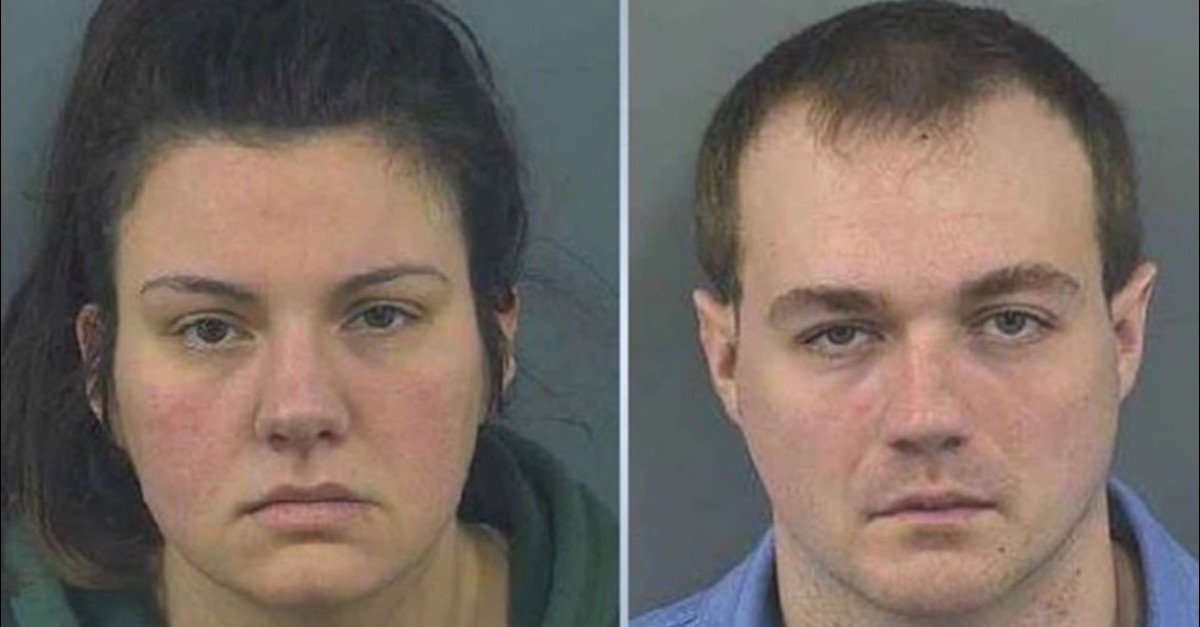 A 26-year-old Wisconsin mother and her boyfriend were arrested for their alleged roles in the death of the woman’s 4-year-old special needs daughter.  Authorities in the Badger State say the girl died last summer with a blood-alcohol concentration well above “lethal” levels.

Samantha S. Smith and Domenic Robert Falkner were both taken into custody and now face multiple felonies in connection with the child’s death, court records reviewed by Law&Crime indicate.

According to a criminal complaint obtained by Law&Crime, the young victim was diagnosed at birth with “severe cerebral palsy” that left her unable to move, speak, or eat. She reportedly only received nutrients and hydration through a feeding tube controlled by either Falkner or Smith.

Per the affidavit, Emergency Medical Services personnel on July 28, 2021 responded to a 911 call about an unconscious 4-year-old girl at an apartment complex located in the 15000 block of West 2nd Street in Hayward.

Upon arriving at the residence, first responders reportedly declared the little girl dead on the scene. In the immediate aftermath of the victim’s death, the Sawyer County Coroner’s Office did reportedly did not order an autopsy, but they did draw a sample of the victim’s blood for further analysis.

The blood sample was analyzed by the Wisconsin State Laboratory of Hygiene which reportedly returned shocking results. The tests determined that at the time of her death, the child had a blood alcohol content of .572 g/100mL, per the affidavit.

For context, that is more than seven times the blood alcohol content (BAC) for an adult over the age of 21 to be considered legally intoxicated in the state of Wisconsin. According to a recent study from the University of Notre Dame, adults require assistance walking and are at risk of blacking out once their BAC reaches levels between 0.20 and 0.249 percent. BAC levels between 0.25 and 0.399 are considered alcohol poisoning and anything over 0.40 percent may lead to “onset of coma” and “possible death due to respiratory arrest,” the study states.

Following the results of the blood analysis, the Midwest Medical Examiner’s Office reportedly exhumed the child’s body and conducted an autopsy. The medical examiner reportedly ruled that the manner of the victim’s death was homicide and determined the cause of death to be “acute ethanol toxicity.”

“The abrasions, contusions, and healing fractures in this non-ambulatory child are also concerning for non-accidental trauma,” the report reportedly stated.

In interviews with detectives, Smith and Falkner allegedly admitted to being the only adults in the home during the time period the alcohol was introduced into the child’s system and were the only ones who operated her feeding tubes.

Falkner and Smith have both remained in detention at the Sawyer County Jail since March 1. Falkner’s bond is set at $2 million; Smith’s bond is set at $1 million. Both are scheduled to appear in court on March 28 for preliminary hearings.

The Sawyer County Clerk’s Office, Sawyer County Human Services, and the sheriff’s office did not immediately respond to messages from Law&Crime seeking additional information about the case.

See the affidavit below: