‘Nothing Could Be Further From the Truth’: Ketanji Brown Jackson Responds to Josh Hawley Allegations of Light Sentences for Child Sex Offenders 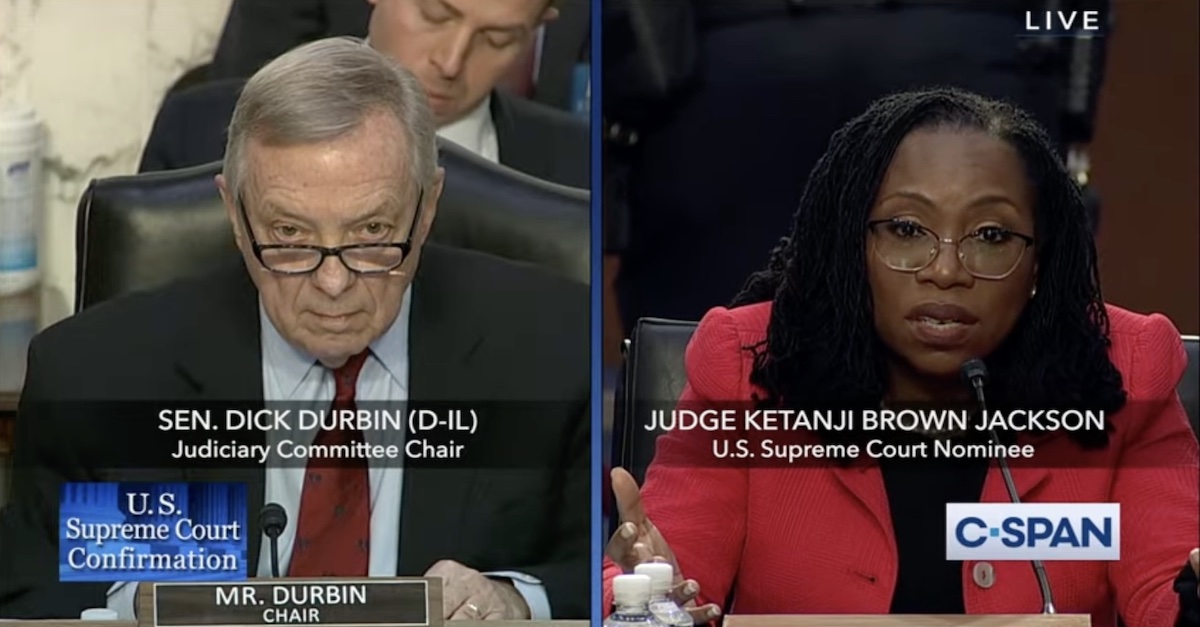 U.S. Supreme Court nominee Ketanji Brown Jackson has pushed back against misleading allegations that she supports light sentences for people convicted of child pornography offenses, saying that she keeps the victims front and center and imposes “significant” sentences in these types of cases.

“As a mother and a judge who has had to deal with these cases, I was thinking that nothing could be further from the truth,” Jackson told Sen. Dick Durbin (D-Ill.), the chair of the Senate Judiciary Committee, when he asked what she was thinking when Hawley repeated the widely–criticized and demonstrably false allegations from Sen. Josh Hawley (R-Mo.) that Jackson has a “long record” of letting child pornography offenders “off the hook.”

“These are some of the most difficult cases that a judge has to deal with because we’re talking about pictures of sex abuse of children,” Jackson said. “We’re talking about graphic descriptions that judges have to read and consider when they decide how to sentence in these cases.”

Hawley accused Jackson, who has served on the U.S. Sentencing Commission, of regularly issuing sentences lighter than what prosecutors recommended, even when that recommendation was the lowest available under statutory guidelines. He listed some cases during his remarks on the first day of Jackson’s confirmation hearings on Monday.

Tuesday morning, Jackson, while not referring to Hawley directly, implied that his examples don’t give a full picture of what judges consider pursuant to the sentencing guidelines established by Congress.

“That statute doesn’t say ‘Look only at the guidelines and stop,'” Jackson said. “The statue doesn’t say ‘Impose the highest possible penalty for this sickening and egregious crime.’ The statute says [to] calculate the guidelines, but also look at various aspects of this offense and impose a sentence that is ‘sufficient but not greater than necessary to promote the purposes of punishment.'”

Jackson said that the sentencing guidelines were developed when child sexual abuse material was distributed through the mail, but that the internet has vastly changed the landscape.

“[The statute is] not doing the work of differentiating who is a more serious offender in the way that it used to,” Jackson said. “The commission has taken that into account and more importantly courts are adjusting their sentences to the changed circumstances, but it says nothing about the judges’ view of the seriousness of these offenses.”

Jackson said that in every case dealing with material depicting child sexual abuse, she makes sure the voices and perspectives of the victims are represented in her sentences.

“I tell them about the adults who were former child sex abuse victims who tell me that they will never a normal adult relationship because of this abuse,” Jackson said, noting examples of people who struggle with prostitution and drug addiction as a result of having been sexually abused as infants.

Jackson said that she tells every defendant in a child pornography case the story about a victim who told her that she developed agoraphobia as a result of the abuse.

“She cannot leave her house, because she thinks everyone she meets will have seen her, will have seen her pictures on the internet,” Jackson said. “They’re out there forever, at the most vulnerable time of her life, and so she’s paralyzed.”

“I tell that story to every child pornography defendant as a part of my sentencings so that they understand what they have done,” Jackson continued. “I say to them that there’s only a market for this kind of material because there are ‘lookers,’ that you are contributing to child sex abuse, and then I impose a significant sentence.”

Jackson said that in addition to incarceration, she imposes sentences that include 20 to 40 years of supervision, including strict constraints and computer use.

“I am imposing all of those constraints because I understand how significant, how damaging, how horrible this crime is,” Jackson said.