‘You Need to Ask Her’: Lindsey Graham Caters to Josh Hawley’s QAnon-style Narrative Against SCOTUS Nominee 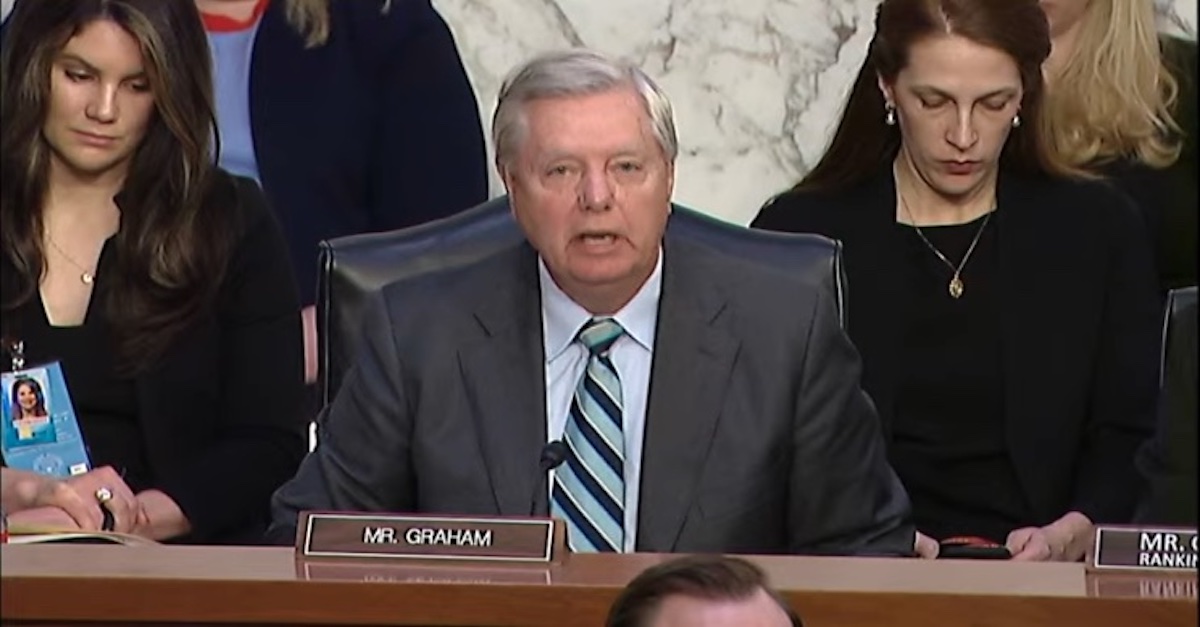 Republican Senator Lindsey Graham of South Carolina said he is looking forward to the questioning of Ketanji Brown Jackson’s judicial record by a fellow senator whose criticisms of the judge have been widely criticized and debunked.

But multiple fact checks show that Hawley’s claims are cherry-picked and context-free, including one example where he attributed to Jackson a line in which she was summarizing not her own view, but that of legal critics of a particular statute.

Fact checks notwithstanding, Hawley’s line of attack appears to be poised to take center stage at the hearings, which started Monday and are set to conclude on Thursday.

“Sen. Hawley, you need to ask her about her record as a circuit court judge,” Graham said. “I hope you do. It’s very fair game.”

Hawley, perhaps best known for an image of himself raising a fist in solidarity with the mob of Donald Trump supporters who later violently stormed the U.S. Capitol on Jan. 6 and temporarily blocked the peaceful transition of power to Joe Biden, has been peddling misleading and out-of-context claims that Jackson opposes harsh sentences for child sex offenders ahead of her confirmation hearings.

Critics have said that in making the allegations—which just so happens to align with the baseless, pro-Trump QAnon conspiracy theory that Democrats in the upper echelons of power are running an underground worldwide cannibalistic pedophile ring—Hawley has gone to a place that “decent people have the good sense not to go.” Others have said Hawley’s statements are “petty” and “tragic.”

Former federal prosecutor Andrew McCarthy, a regular guest on Fox News who has said he opposes Jackson’s nomination on other grounds, called Hawley’s attacks “meritless to the point of demagoguery.”

Graham also railed against the 2018 confirmation hearings of current Justice Brett Kavanaugh, who faced accusations of sexual assault, and the October 2020 confirmation of Amy Coney Barrett on the eve of the presidential election, both of which were marked by sharp criticism from Democrats.

“You’re the beneficiary of Republican nominees having their lives turned upside down,” Graham said to Jackson, who graduated from both Harvard University and Harvard Law School, clerked for retiring Justice Stephen Breyer, and was confirmed by the Senate multiple times, first as a judge for the U.S. District Court for the District of Columbia, and then for the appellate court for that same jurisdiction.

Graham also made it clear that he would have voted to confirm U.S. District Judge J. Michelle Childs had she been the nominee, but has concerns about Jackson who he says was backed by the “radical” arm of the Democratic party.

Early Monday afternoon, Hawley said that he is “not interested in trying to play gotcha” with his questions.