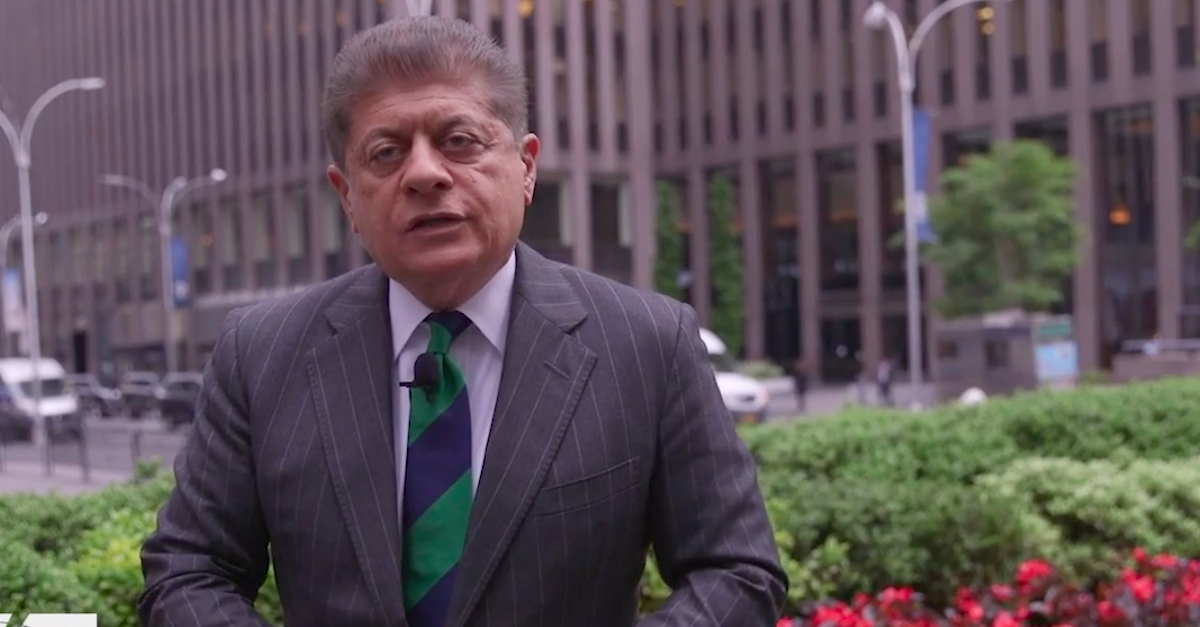 A Fox News associate producer claimed in a lawsuit on Monday that Judge Andrew Napolitano sexually harassed him and “numerous young male employees,” allegations that he claims exposes the so-called “zero tolerance policy” announced by CEO Suzanne Scott as a “fraud.”

Fox disclosed in a statement that the network has “parted ways” with Napolitano.

An associate producer for Larry Kudlow’s show, John Fawcett also claims that, in the “worst-kept secret at Fox News,” the network falsely denied that its president Jay Wallace had an affair with a female subordinate, even though “numerous female employees” overheard “romantic phone conversations” she had with him inside a bathroom stall of the women’s restroom.

“As explained in this complaint, sexual harassment, sex discrimination, and racial discrimination are still tolerated at Fox, and Ms. Scott and her executive team will bend over backwards to protect such behavior so long as it is perpetrated by senior management or prominent on-air personalities,” the lawsuit claims in its introduction.

Fox bristled at the critique in a statement.

“Under the leadership of CEO Suzanne Scott, FOX News Media has worked tirelessly to transform the company culture, implementing annual, mandatory in-person harassment prevention training, creating an entirely new reporting structure, more than tripling the size of our HR footprint, conducting quarterly company meetings and mentoring events, as well as executing a zero tolerance policy regarding workplace misconduct for which we engage outside independent firms to handle investigations,” the network said.

“No other company has enacted such a comprehensive and continuous overhaul, which notably, earned FOX News Media recognition as a ‘Great Place to Work’ for the first time in its existence, a testament to the many cultural changes that Ms. Scott has instituted during her incredibly successful tenure as CEO,” it added.

“The Worst-Kept Secret at Fox News”

In the wake of #MeToo scandals that brought down Roger Ailes, Bill Shine, and Bill O’Reilly, Fox News hired Scott to clean up shop in 2018. Since that time, similar lawsuits have continued to hit the courts, including one accusing ex-anchor Ed Henry of rape and the network of sex trafficking. That civil case remains pending, but earlier this month, Fox settled claims by ex-Fox Nation host Britt McHenry. She had claimed that her former co-host George Murdoch (also known as the wrestler “Tyrus“) sent her inappropriate text messages, creating a hostile work environment allegedly tolerated by the network.

Fox noted that it fired Henry for “willful sexual misconduct and stand by the decision entirely”—as it continues to fight another lawsuit filed by the ex-anchor over the imbroglio.

“We are fully prepared to vigorously defend against these baseless allegations as Mr. Henry further embarrasses himself in a lawsuit rife with inaccuracies after driving his personal life into the ground with countless extramarital affairs in a desperate attempt for relevance and redemption,” the network wrote.

Filed in Manhattan Supreme Court on Monday, Fawcett’s complaint accuses Fox of the same old practices of protecting their stars like Napolitano and Kudlow, the latter of whom Fawcett claims to have overheard using “ethnic slurs” and “sexually inappropriate comments about women.”

Fox News vigorously denied those allegations in an unsigned statement, which notably said that the network has parted ways with its senior judicial analyst.

“Upon first learning of John Fawcett’s allegations against Judge Andrew Napolitano, FOX News Media immediately investigated the claims and addressed the matter with both parties,” the statement read. “The network and Judge Napolitano have since parted ways. We take all allegations of misconduct seriously, are committed to providing a safe, transparent, and collaborative workplace environment for all our employees and took immediate, appropriate action. Furthermore, the additional allegations laid out in this claim are completely baseless and nothing more than a desperate attempt at a payday by trying the case in the court of public opinion as the complaint does not meet the standards of the law. We will defend the matter vigorously in court.”

“They Look Clean, But They Get Really Dirty”

Two other men previously accused Napolitano of inappropriate sexual behavior before, including a New Jersey waiter who claimed the judge “forced” him to engage in a “bizarre sex act.” Napolitano’s then-attorney Tom Clare depicted that lawsuit as a “copycat” to allegations filed by Charles Corbishley, who had claimed the judge coerced him into performing oral sex in exchange for a more lenient sentence. When that scandal broke in September, Clare called Corbishley a “career criminal.” Clare did not immediately respond to an email requesting comment about the latest allegations against Napolitano.

Both of those lawsuits were filed in September 2020, and Napolitano cast them both as smear campaigns.

In his complaint, Fawcett alleges that Napolitano’s reputation for sexual harassing young men was well-established by 2019, the year Fawcett says he began working for Fox Business Network.

That autumn, Fawcett claims he encountered Judge Napolitano on an elevator at Fox News headquarters in Manhattan.

“Even though the two had never met previously, Judge Napolitano stood awkwardly close to the plaintiff, started stroking his arm, and asked who the plaintiff worked for,” the lawsuit states.

After Fawcett replied that he worked for former Fox Business host Lou Dobbs, Judge Napolitano asked whether he was looking for a new job, and conversation turned to Dobbs’s horse farm and Napolitano’s maple syrup farm, according to the complaint.

“You see these hands?” Judge Napolitano allegedly told Fawcett suggestively. “They look clean, but they get really dirty.”

According to the complaint, Napolitano invited Fawcett to his New Jersey farm or Manhattan apartment, and Fawcett “politely excused himself” after the elevator reached his floor.

“When the plaintiff reached his office and told his co-workers about the encounter, they immediately started laughing,” the lawsuit states. “It was common knowledge that Judge Napolitano sexually harassed young men at Fox News, and it had even happened to one of the plaintiff’s co-workers. The plaintiff did not initially report the incident to human resources, however, because he did not want to jeopardize his career at Fox, but he did tell Mr. Dobbs.”

Fawcett claims Dobbs reported allegations to Fox’s chief human resources officer Kevin Lord, who allegedly responded: “Well, what are you going to do about it?”

After the previous lawsuits against Napolitano came out, Fox allegedly footed the judge’s legal bills, even though neither lawsuit involved the network.

“As usual, Ms. Scott has been protecting her boys,” the complaint states.

Fawcett’s lawsuit appears to aim far wider than the allegations of “unwanted gender-based conduct” against him, filled with gossip and news reporting relating to other staffers cited in service of his thesis that Fox has not reformed.

Chief among these apparent digressions are his claims against Wallace, whom the network denied had an affair with a subordinate.

“FOX conducted a full and independent investigation of the claims against Jay Wallace – he was cleared of any wrongdoing and the allegations are false,” the network said at the time.

Calling the denial “flagrantly dishonest,” Fawcett claims Wallace’s purported mistress was transferred from his office to a journalism role at the network’s website, edging out a “more senior female investigative reporter” for the position. Wallace served as the executive vice president for news and editorial at the time of Fox’s investigation, and Fawcett claims that Fox’s CEO Scott promoted him to president following that investigation.

“By covering up for Mr. Wallace and Judge Napolitano, Fox News has shown that its ‘zero tolerance policy’ is a joke,” the complaint states. “Even now, Fox News covers up sexual misconduct in the interests of protecting profits and preventing embarrassment.”

Fawcett also claims that Larry Kudlow, whose show he still works for, made “inappropriate comments about women and minorities during phone conferences with staff.” The complaint quotes Kudlow as musing to staff that he would like to have a “three-way” with a Fox anchor, while a senior vice president was on the line.

The lawsuit also accuses former Trump economic advisor Kudlow of making bigoted comments about Rep. Maria Eliva Salazar and Rep. Byron Donalds, both Republicans from Florida. Fawcett claims Kudlow responded to a scheduled appearance by Salazar, the daughter of Cuban exiles, by saying: “Why don’t we just let the Mexicans in?” and referred to the African-American Donalds simply as “the black.”

“No, no, no, I don’t want the black on the show,” Kudlow said on April 29, according to the complaint.

The lawsuit claims that Donalds’s appearance was cancelled on that day.