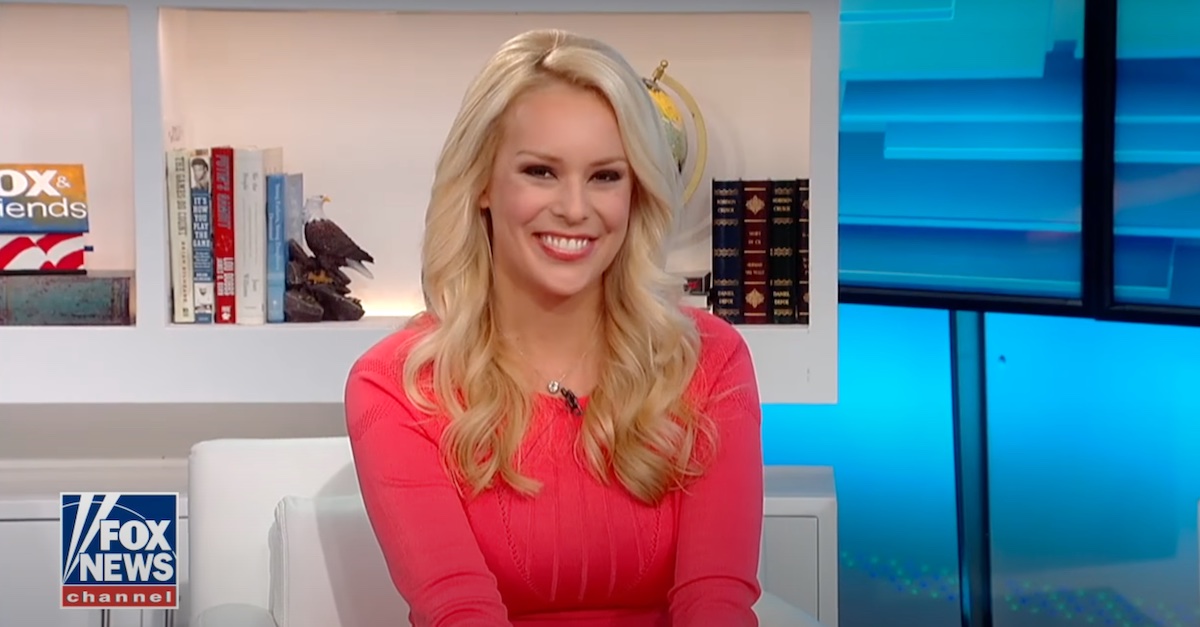 “While FOX News is confident it would have prevailed in the lawsuit, we are pleased that we have been able to resolve this matter without further litigation,” the company said in a statement.

“I am very proud to have to stood up for my rights and hope that I have empowered other women to do the same,” she said in a statement provided to Law&Crime through her attorneys. “Although I fully stand by the truth of my allegations, I am pleased to put this matter behind me and move forward with my career.”

The Stipulation of Voluntary Dismissal obtained by Law&Crime states that all parties agreed to rubbish the matter “with prejudice,” which means the case cannot be refiled. All of the parties also agreed to pay their own attorneys’ fees and costs, the document says.

The dismissal document cites Federal Rule of Civil Procedure 41(a)(1)(A)(ii), a rather perfunctory rule which allows all parties involved with an action to agree to wipe the case off the docket with little more than the signatures of all involved.

The July 19 stipulation was originally filed July 16, but the court rejected it because the document contained only electronic signatures. A note from the clerk and a subsequent refiling by McHenry attorney Arick Fudali containing actual pen-and-ink signatures summarily cleared up that issue.

Ironically, the court docket indicates the filing of the case was also plagued with signature errors as well; the case in that ironic respect ended just as it began.

The settlement comes a little more than two weeks after fact discovery and depositions were scheduled to occur in the case. That evidence was due to have been completed by June 30, according to a proposal signed by U.S. District Court Judge Paul A. Engelmayer. Summary judgment letters and a meeting to discuss a possible settlement were scheduled to take place July 14, shortly before the settlement was filed. Expert discovery, had the case moved forward, was scheduled for August 13, according to the order.

McHenry sued various FOX corporate entities, executive producer Jennifer Rauchet, and co-host George Murdoch (also known as the wrestler “Tyrus“) on claims that the company and the other defendants fostered a workplace which “spawned a hostile environment of rampant sexual harassment, sexual assault, overt misogyny, and retaliation.” Specifically, McHenry alleged that Tyrus sent her “inappropriate text messages” which, according to court documents, included “I love your legs,” “Fuck them your beautiful I love that picture,” “Is it creepy how I look at you ???,” “FYI you’ll need those legs to escape from me in Montana,” “I please especially on your knees hotness,” “I’ll show you what it mean to be bad Brittany Mc Henry,” and “Dick pic coming in 5 sec!!!!” McHenry also argued that FOX retaliated against her when she complained about the communications.

A judge ruled that Murdoch’s “communications, as pled, are readily construed to reflect sexual advances and propositions, albeit unusually crude and clumsy ones, towards” McHenry. In other words, he was not exactly the model of a “smooth operator,” the judge rationed.

FOX replied that the accusations told only half of the story. The network and its associated defendants responded on Jan. 19 by denying that McHenry’s version of events was “complete or accurate” — in part because McHenry claimed she “lost her phone before filing” the case.

“There were also countless examples of innuendo, comments of a sexual nature, and vulgar or potentially offensive language made by both parties,” Fox said in an earlier filing reported by Law&Crime in January. “Neither appeared to be offended by crude language or topics.”

Specifically, FOX argued that the so-called “[d]ick pic” was sarcasm. What followed, the defendants said, was not “a photo of his or anyone else’s genitalia,” but rather was a “photo of an individual who they both disliked.” What followed were “over 175 messages and a 30-minute phone call” — suggesting McHenry was not offended by the communication, FOX and the other defendants argued.

And some of the communications contained frequent attempts by McHenry to solicit support from Tyrus about the way she looked, as Law&Crime has detailed in the past.

FOX sought a forensic examination of McHenry’s phone and pilloried the plaintiff for not being able to provide the original device to prove all of her proffered text message logs were truly accurate.

“Britt has already provided all of the relevant text messages, which she downloaded before she lost her phone, to the investigators and in discovery,” Bloom said in January. “We have also offered a forensic examination of her laptop and cloud to obtain any and all messages between her and Mr. Murdoch. She has nothing to hide.”

FOX pressed further. By mid-February, the defendants characterized the McHenry-Tyrus communications as “a consensual exchange of lewd banter, as found by independent investigators.” The defendants also accused McHenry of engaging in a “charade of offering to submit her cell phone for forensic examination, never mentioning that it had been lost.”

Read the brief settlement document below: