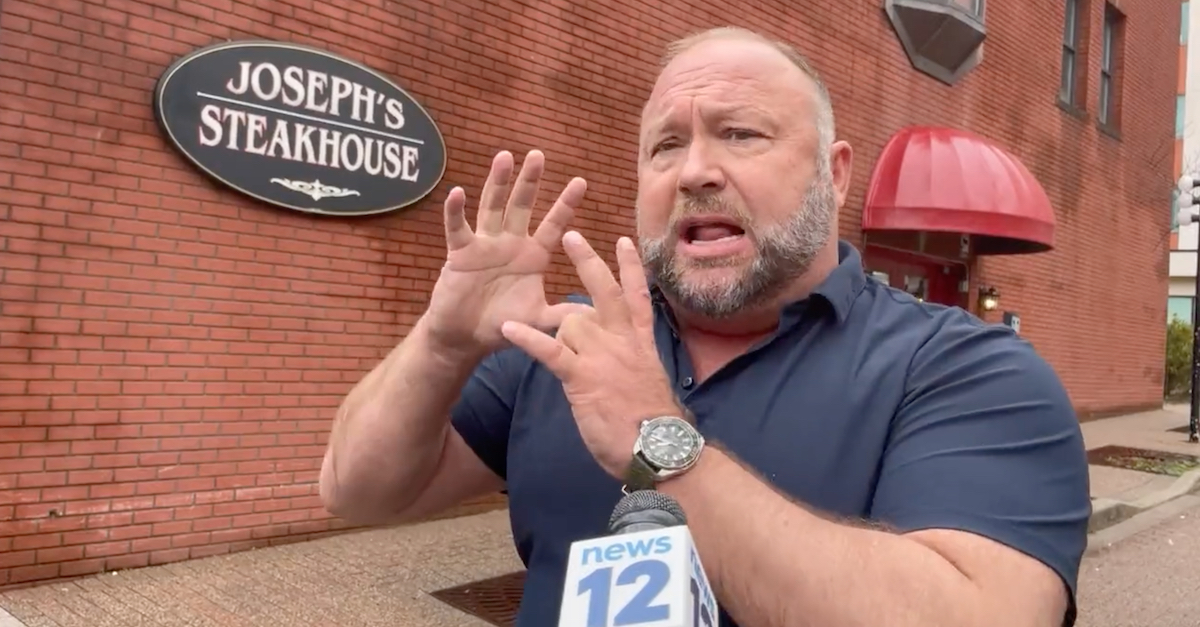 In a flurry of court papers filed Tuesday and Wednesday, attorneys for Infowars host Alex Jones asked a Connecticut superior court judge to shove back a swiftly approaching trial date to determine the level of damages appropriate in a defamation lawsuit brought by the families of the victims of the 2012 Sandy Hook school massacre. One of the filings asks a judge to block “the introduction of evidence on the topics of white supremacy and right-wing extremism.”

“Such evidence is not relevant to the issues that will be before the jury and would also be unfairly prejudicial and inflammatory to the defendants,” Jones attorneys Norm Pattis and Kevin Smith wrote in a five-page document.

The plaintiffs have disclosed several potential expert witnesses. At least two of them, Dr. Heidi Beirich and Oren Segal, may, according to the disclosures, attempt to testify on the topics of white supremacy and right-wing extremism. Additionally, the plaintiffs may seek to introduce evidence on those topics through other witnesses and exhibits. No matter the source, evidence relating to those topics is irrelevant, would be an attack on the defendants’ character and play to the emotions of the jury and distract from the main issues.

After a brief walk through the basics of evidence law, the Jones defense attorneys continued:

The plaintiffs have pled six causes of action: invasion of privacy by false light, defamation, defamation per se, intentional infliction of emotional distress, negligent infliction of emotional distress and violation of the Connecticut Unfair Trade Practices Act. Evidence regarding white supremacy and right-wing extremism, or testimony that purports to characterize the defendants and their actors as white supremacists or right- wing extremists, would not advance any of the elements of the aforementioned causes of action or establish potential damages. What it would do–and perhaps this is the intent–is distract from the issues and negatively characterize the defendants.

“Attempts to associate the defendants with individuals who espouse racist or extreme views would amount to improper character evidence,” the defense asserted.  (Jones and several associated companies are the multiple “defendants” referenced.)

“Allegations or associations of racism or extremism are inflammatory and unfairly prejudicial,” the defense continued. “Additionally, they implicate the First Amendment rights of free speech and free association. That a person is connected to those ideas or movements, however unpopular or reprehensible, has no bearing on whether he is liable for any of the causes of action at issue in this case.”

To support its argument, the defense cited a 1992 U.S. Supreme Court case that reversed a death sentence against a member of the Aryan Brotherhood.  That case held that the rights of association and due process together prevented prosecutors from using a defendant’s white supremacist ties against him during the sentencing phase of a murder trial.

Again, from the Jones defense team:

Any attempt by the plaintiffs to introduce evidence or testimony on white supremacy and right-wing or any other kind of political extremism is to distract the jury from the issues at hand–the causes of action and potential damages. It is a transparent effort to smear the defendants by associating them with unpopular ideas and people which themselves are not part of this case, which would violate the defendants’ due process rights to a fair trial and also their constitutional rights to free expression and association. Jurors must decide issues and damages on facts, not their feeling about parties and not by the parties’ associations and images.

In another Tuesday filing, the defense asked the court to push back the trial date or grant Jones an excuse from appearing personally through at least some of the trial.

The first of those two requests asks a judge to reconsider a previously ordered jury selection date of Aug. 2 and a trial commencement date of Sept. 6 in the Nutmeg State.

“The defendant will be on trial in two matters proceeding in the state of Texas, and thus will be prevented from attending his trial in the above captioned cases as they are currently scheduled,” the document asserts.  “The defendant cannot be in two places at once.”

“This conflict in scheduling is no fault of the defendants’, and this Court’s refusal to continue the trial to a time when he is not concurrently on trial in another state amounts to a Due Process violation,” it continues.

One of the two Texas cases is said to be scheduled to begin on July 15; the other is slated for Sept. 18, according to the defense.

The second of the two aforementioned requests asks a judge to quash a previous request to require Jones to appear personally for the duration of the Connecticut proceeding.

“Not only does the breadth of the subpoena saddle Mr. Jones with expensive accommodation costs that will easily exceed $150 per day, but it also requires a physical impossibility by demanding his presence in Connecticut when his presence will also be demanded in a similar trial in Texas,” that document reads in rough congruence with the previous request. It asks the court to pinpoint specific days upon which Jones would be forced to appear in Connecticut.

The Court has reserved approximately six weeks for the presentation of evidence. The Plaintiffs’ subpoena compels Mr. Jones to relocate himself thousands of miles away from his home for weeks at his own expense to be at their beck and call as to when he will testify in the above-captioned actions. If he fails to relocate himself so as to be available at their capricious whims, he will be subject to being held in contempt of court again — a development that the Plaintiffs undoubtedly are gleefully anticipating as their primary goal in this litigation has been to embarrass Mr. Jones and shut down his business. Not only does this state of affairs impose a financial cost on Mr. Jones in the form of lodging, other expenses, and lost income, but it also hopelessly hamstrings his ability to aid in the preparation of his defense in [one of the Texas] matters.

The document balks that Jones will have to shell out “at least” $3,150 to stay in Connecticut for three weeks. His stay will, however, cost considerably more, the defense posited, because the “politically charged nature” of the case will also require Jones to have a “security team” while in Connecticut.

The document also bemoans that Jones “will face serious difficulties in operating his business” during the proceeding.

“He is a journalist and a nationally known media personality who unequivocally bears more than the lion’s share of sustaining his businesses,” the filing asserts. “Forcing him to do nothing in a hotel room or a courtroom for weeks at a time will deprive him of the ability to earn a living and cause him severe financial hardship. While the Plaintiffs wish to see Mr. Jones stripped of his microphone and his access to the marketplace of ideas, the power of the subpoena is an abusive tool by which to accomplish it, and the breadth of the subpoena issued poses a severe business hardship to Mr. Jones.”

In yet another filing, Jones and his defense team moved the court to be able to explain precisely why the jury is going to consider damages only — not the core issue of whether defamation occurred.  The reason is because a judge entered a default judgment as to the meatier legal question:

In a Wednesday filing, both sides listed Jones himself as the first witness they each wish to call to the stand.  Jones’s other witnesses include his employees and corporate staffers.  The plaintiffs themselves plan to testify along with several eyewitnesses and experts, according to the Wednesday document.

Read the various filings below; Thursday’s are combined into a single PDF for convenience: