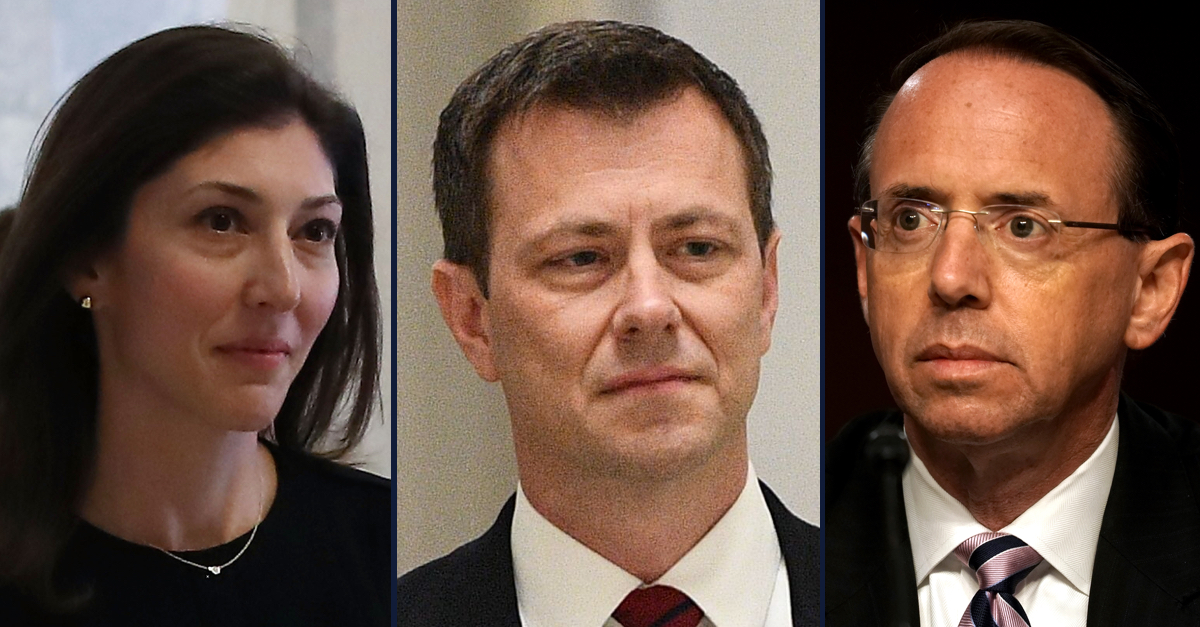 The Justice Department’s former second-in-command who released the text messages of former FBI employees concerned about a Donald Trump presidency will face questions from at least one of those employees in a deposition.

Two lawsuits against federal law enforcement officials and agencies by Strzok and former FBI lawyer Lisa Page stem from the December 2017 release of text messages between the two in which they exchanged concerns about a possible Trump presidency. The messages also revealed that Strzok and Page were having an extramarital affair. The disclosure of the texts animated conservatives and Trump supporters, who claimed that the messages proved the existence of a so-called “Deep State” that was working to undermine the then-president, even before he took office.

Trump himself targeted both Page and Strzok, amplifying the hard-right anger against them and, at one point, accusing them of committing treason by participating in the investigation into the Trump campaign’s alleged ties to Russia.

Page resigned from the FBI in May of 2018. Strzok was fired by then-Deputy FBI Director David Bowdich in August of that year.

Both lawsuits have survived DOJ efforts to dismiss the cases, and in a hearing Wednesday, it was revealed that both Rosenstein and Bowdich will sit for depositions in Strzok’s case in the coming weeks.

Rosenstein’s deposition was referenced in an Aug. 3 filing by the DOJ in support of its motion to quash the deposition requests. Bowdich’s deposition has been set for Sept. 9.

“Snark Is Not as Satisfying to Read as It Is to Write.”

At the start of the hearing, Jackson also took a few moments to speak directly to the lawyers, taking them to task for pleadings that verged on open hostility.

“As for the lawyers, I’m concerned that the level of acrimony … isn’t in keeping with the serious nature of the case,” Jackson said.

She suggested that the lawyers may be wasting time on unnecessary busywork.

“The sheer volume of the pleadings” is surprising, she said, because the “governing principles of of law here are easily stated and entirely clear.”

“The larger problem is the vitriol,” the judge continued said, adding that the “antagonistic tone” the lawyers have taken with each other is “counterproductive.”

Jackson said the “pleadings seem to be serving the purpose of a PR campaign,” filled with “quotable quotes in the hope of getting picked up by the media.”

“I can assure you … snark is not as satisfying to read as it is to write,” Jackson added.

The judge appeared disinclined to allow Strzok’s would-be deposition of Wray, who currently heads the FBI, to proceed.

“Top Executive Department officials should not, absent extraordinary circumstances, be called to testify about the reasons for their actions,” Jackson said, later adding: “High-ranking officials are generally not subject to depositions unless they have some personal knowledge about the matter, and the party seeking deposition makes a showing that the information cannot be obtained elsewhere.”

This standard, Jackson said, “protects the integrity of the government’s decision-making process.”

Jackson also said that both Trump and Wray may be called to a deposition because of their participation in a meeting that is alleged to have taken place in January 2018, months before Strzok’s firing. She seemed most inclined to deny Strzok access to Wray, who was appointed by Trump and whose “significant work would be interrupted” by having to sit for a deposition.

Jackson told both parties that they would reconvene after the depositions of Bowdich and Rosenstein and address the issue of privilege and other objections by late October.

“We Want To See What’s In Those Messages.”

As Jackson set future dates and briefing deadlines, she noted that she — like most judges on the D.C. District bench — were dealing with other high-profile cases.

“You might be aware of something that happened on Jan. 6,” Jackson cracked, noting that the Capitol attack has resulted in an “avalanche of criminal cases that have overrun our docket.”

“Civil cases are important, but we are trying to deal with incarcerated people and their problems first,” she added.

She then turned to another discovery issue, specifically the plaintiffs’ request to view other text messages that internal FBI investigators had deemed “inappropriate,” but did not release them to the public.

“Our request is for all the communications the inspector general identified as inappropriate during their review,” Strzok’s attorney Christopher MacColl said, referring to a DOJ’s Office of Inspector General’s review of the investigation.

“Do you think they identified something as inappropriate and never mentioned it in the review?” Jackson asked.

“I absolutely do,” MacColl replied, citing an exchange between the OIG and the head of the FBI’s office of professional responsibility that says “there were dozens of employees who sent inappropriate communications.”

That exchange, MacColl said, includes an email that “says in essence it would be unfair to discipline” only Strzok and Page.

MacColl said the emails essentially asked why investigations weren’t being conducted into other people who also sent inappropriate communications.

Jackson commented that such emails appeared to be “really germane” to the case, and that it “doesn’t seem like such a huge universe of documents” that the defense attorneys couldn’t obtain them.

As Law&Crime previously reported, Rosenstein has acknowledged that he was behind the decision to release the text messages. In a 2020 declaration supporting the DOJ’s effort to dismiss Strzok’s lawsuit, Rosenstein said he decided to share the texts with the media after providing the messages to Congress because he anticipated that lawmakers and congressional staff were prepared to lead the messages “intermittently,” which he believed would “exacerbat[e] the adverse publicity” for Strzok, Page, and the Justice Department.

Both Page and Strzok — along with former FBI Director James Comey, former Deputy FBI Director Andrew McCabe, and others — have been dismissed from Trump’s racketeering lawsuit against Hillary Clinton and other perceived enemies.